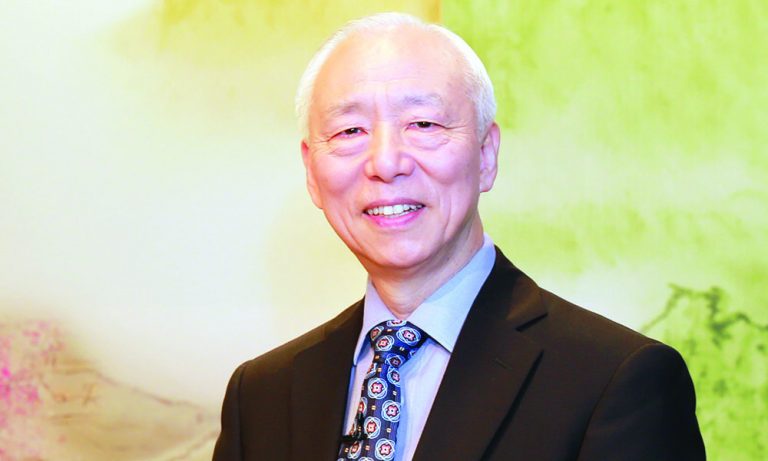 The over-seventy, white-haired but young-looking Taiwanese herbalist, Hu Naiwen, not only has great skills but also treats his patients like friends and family. (Image: Screenshot via YouTube)

The over-70, white-haired but young-looking Taiwanese herbalist Hu Naiwen not only has great skills, but he also treats his patients like friends and family. He is always smiling and full of energy. Many of his patients have tried out many famous doctors before they found Dr. Hu Naiwen and got cured. They express great gratitude and respect for the doctor. Nevertheless, Dr. Hu grew up with poor physical health, so how did he transform into a healthy and famous doctor?

Dr. Hu Naiwen said that he had been in poor health since he was a child and often had problems. Even after he grew up, he always had a waxy complexion, felt weak and tired, and often suffered from a bad stomach due to stress.

Before he went to high school, he had no special interest in anything. He did not know what he wanted in life and never thought for one moment that he would practice medicine one day.

Dr. Hu Naiwen studied biology in university and specialized in neuroscience and endocrinology in graduate school. After graduation, he worked in the pharmacology field and was sent to work at the Stanford Research Institute International to research life science.

He recalls: “During my graduate school days in America, I often went to the library to check out the latest research and scientific literature. I found that there was a way of treatment in Chinese medical science called acupuncture. Since I was studying Western neuroscience, I thought there must be a connection between neurology and acupuncture.”

Due to his poor health, Dr. Hu Naiwen took a lot of nutritional supplements and “health foods” while he was studying western medicine. Even though he consumed a great deal, he did not feel that his body had improved. After he became a Chinese medicine practitioner, he began to take Chinese herbal medicine to regulate his body. Although it seemed that he managed to maintain his health quite well, he knew that his body condition was quite poor.

After trying various methods from both Chinese and Western medicines to no avail, he approached various schools of qigong in the hope of getting rid of illnesses and getting fit and healthy.

He said: “I went and looked around. Finally, I heard from a classmate in a qigong class mentioning ‘Falun Gong.’ I was close to 50 years old then. However, people hardly knew of Falun Gong at that time. I kept asking around and finally found an old gentleman who had studied Falun Gong.”

Dr. Hu Naiwen started practicing Falun Gong after meeting the elder man. Gradually, he found that all the problems he used to suffer from disappeared, even his chronic gastrointestinal upsets. He also became more and more mentally alert with better hearing and sight. His mental capacity was widened and he was able to comprehend and gain a deeper understanding of many difficult medical texts.

A short video about Dr. Hu Naiwen who is a renowned Chinese physician at the Shanghai Tongde Chinese Medicine Hall in Taipei City:

Illnesses are rooted in the mind, and the world changes as the mind changes

Dr. Hu Naiwen recalled that not long after he started learning Falun Gong, an old woman came to his clinic. She was a Christian who prayed every day. He asked her what she said in her prayers and confessions. The old lady said she spoke to God about the discontentment in her daily life such as whom she was angry at that day and whom she did not agree with the other day.

Dr. Hu Naiwen thought that to heal the sickness, the heart must be healed first. He needed to open the patient’s heart before talking about the illness, so he said to the old lady, “Look. We are talking about repentance here. Is it that you repent only for forgiveness every day without feeling regret? If you confess but do not regret, or if you regret but do not change, nothing will change at all.” The old lady took in his words and cried there and then.

The next time the old lady came to see him, she told him that since her last visit, she had changed her bad habit of losing her temper, and to her surprise, her illnesses were all gone.

Dr. Hu Naiwen commented that according to the theories of Chinese medicine, in addition to improper lifestyle habits and incorrect ways of nurturing the body, some illnesses, including much-feared cancer, may be the result of excessive emotional joy, anger, fear, and panic. The fluctuations of these emotions – joy, anger, sadness, grief, and fear – are mainly caused by peoples’ inner desires and attachments to things such as fame, gain, and sentiment.

“The illness itself is not the problem; the state of mind in response to the illness is the key.” Many cases show that once a patient lets go of his or her inner desires and attachments, the “disease” disappears.

Since he has benefited greatly from Falun Gong and has seen many fellow students with difficult medical conditions healed from following Falun Gong, Dr. Hu Naiwen introduces this miraculous qigong to his patients when he has the opportunity to do so.

He said there was a young man who used to come to his clinic once or twice a week. The man was afraid of the cold so much that he needed to tape up the windows of his home to fend it off. After being introduced to Falun Gong, he was able to sweat. He has recovered completely and has not come back since. There was also a patient with lupus erythematosus who flew from Tainan to Taipei every week to see him. After he introduced the patient to Falun Gong, he never saw him again either.

In his over 30 years of medical practice, Dr. Hu Naiwen has gained a deep understanding of the relationship between life cultivation and mind cultivation, and between morality and health, and has helped countless patients become free of their illnesses.