Their Amazing Fate Played Out When Two Lives Crossed 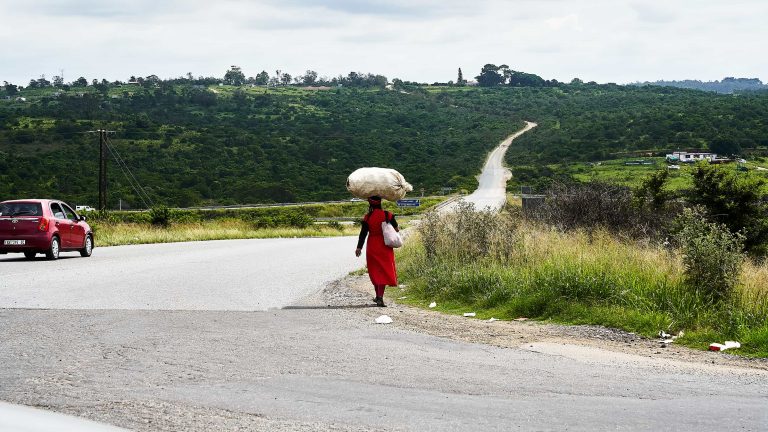 The road wound through a deserted area of the countryside, where there was not a single village in sight. (Image: Stefan Deutsch via Dreamstime)

In a remote coastal town in East London, South Africa, there lived a couple named George and Helen. George worked long hours on a vineyard in the north end of town every day, while Helen, who was pregnant with their child, stayed at home to rest. Who could ever foretell the amazing fate when two lives crossed?

Every morning, George made the long journey across the difficult and winding mountain road that led to the farm, more than 50 kilometers away. The road wound through a deserted area of the countryside, where there was not a single village in sight.

One day, as George was slowly driving along the mountain road, he received a call from his wife.

“George, you need to come home right away! My stomach hurts so badly. I think our baby might be arriving prematurely!” Helen cried.

Hearing his wife’s words, George immediately panicked. Their home was in the middle of nowhere. There was no neighbor nearby, and they lived many miles from the town hospital.

When the doctor last examined Helen, he suspected that she might go into premature or obstructed labor. George knew that if he didn’t get Helen to the hospital quickly that she and their child would probably not survive.

“Honey, don’t worry, I’ll turn around and get there as fast as I can!” George knew time was of the essence. He dropped his cell phone and immediately turned his jeep around to head back home.

Anthony’s son is injured in a car accident

Just as he started down the road, someone suddenly ran up to the car from behind, shouting for help as he pounced on the front of the car. George looked at the middle-aged man in surprise as he cried out: “Sir, please, save my son!”

The man, whose name was Anthony, explained that he had taken his wife and son out for a drive on a sunny day, when, unexpectedly, the brakes on their SUV failed. The car rolled down a mountain pass and crashed into a valley. He and his wife had only a few bruises, but they weren’t sure if their 9-year-old son, who wasn’t wearing a seatbelt, was dead or alive.

George knew they were only about 20 kilometers from the town hospital, but if he went back home to get his wife, it would take much longer to get to town. He found himself caught in a dilemma — if he helped Anthony, his wife and child’s life would be in danger, but if he drove back to get his wife, Anthony’s son might bleed to death due to the long delay.

As George hesitated, pondering what to do, Anthony surprised himself by falling to his knees in front of the car. “Please, I beg of you, help save my son!”

George wanted to tell Anthony that his wife and unborn child were also in danger, but instead, he jumped out of the car and pulled Anthony to his feet, “Where’s your son?”

Anthony immediately led George a short distance ahead and pointed out his son lying on the ground along the side of a trail. The two men walked down to the boy, and as George leaned down to take a closer look, he saw the boy was covered in blood. His face was ashen pale, and he had lost a lot of blood. George saw many heavy wounds on the boy’s body and legs, which continued to bleed. After just one look, George turned away, unable to bear to look at him any longer.

With tears in his eyes, Anthony said: “We’ve called emergency services, but the ambulance will take twice as long to make the round trip. By then it will be too late for my baby to be saved!” Anthony said they were desperate to find help, so he waited on the trail by their son, while his wife Mary took a shortcut to find someone with a car in the nearest village.

When George heard this, he knew that there were no neighbors nearby to help, and only his home lay over the mountain ridge.

At that moment, after much struggle and thought, George made a hard decision — to save Anthony’s son.

“Get the boy in the car!” George shouted.

Anthony rushed to pick up the boy as George started the jeep, and the three of them sped off toward the town hospital.

As he drove, George grabbed his mobile phone and called home, hoping to encourage Helen to hang on. Helen’s moans of pain were like pins and needles in George’s heart: “Where are you?” she cried.

Ten minutes later, George called home a second time. Helen’s voice was already very faint. George again fought back tears and kept murmuring into the receiver: “Honey, forgive me, I can’t leave an injured boy here to die. May God Bless us all.”

Before long, they arrived at the hospital. Because they’d gotten the boy to the hospital so quickly, he was soon out of danger. George’s thoughts turned to his wife. He called home a third time, but this time, there was no answer. Tears instantly rolled down his cheeks. He knew Helen was in danger, and he had to get home.

When Anthony heard the story, he insisted on coming along to help. George made a mad dash over the winding road, and then, just as they were nearing the house, they suddenly heard the sound of a baby crying.

George rushed in to find Helen covered in a quilt, safe and sound in bed, with a sweet, newborn baby, wrapped in swaddling clothes, lying at the foot of the bed. A tired-looking woman stood next to the bed, gently coaxing the child.

The fate that played out when two lives crossed

George was surprised and overjoyed. At that moment, Anthony, who had followed him in, went over to the woman and hugged her, telling her excitedly: “We must thank George for his help, dear. Our son is alright, thanks to him!” As Anthony shared the story of his son’s rescue, George realized this was Anthony’s wife, Mary.

It turned out that Mary was an obstetrician, and after taking a shortcut up the mountain road to look for help, she passed in front of George’s house. It was then that she heard Helen moaning in pain. Mary went inside to find that Helen was in malposition and premature labor. The situation would certainly have been life-threatening if the baby had not been professionally delivered.

“I’m sorry, George,” Mary said apologetically. “It was a difficult choice for me at the time, not knowing whether to save Helen first or continue to look for a car for my son. It’s a good thing I didn’t choose wrong at the last minute.”

George’s eyes glistened with tears, but his face flushed: “I should be the one to say I’m sorry, Mary. I hesitated when Anthony asked me for help.”

“But in the end, none of us went against our conscience,” Anthony concluded.

George leaned over to look at Helen, who was already asleep, and then at the adorable infant in swaddling clothes. He was again moved to tears, this time, out of gratitude and love.