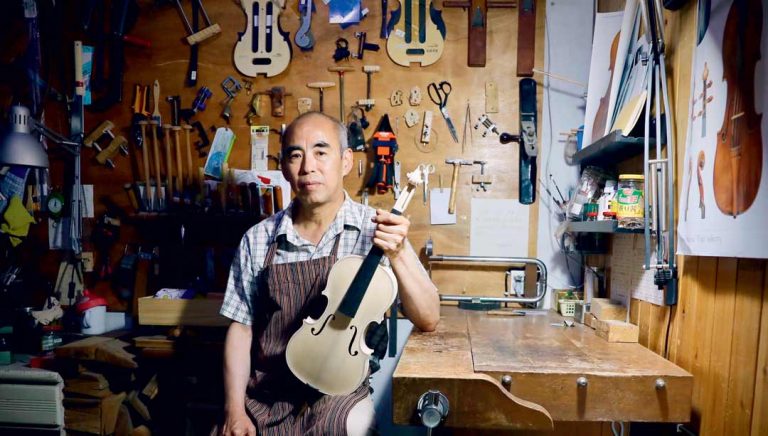 Xian Baokang, a deaf Chinese violin maker, won the gold medal in the 13th Violin Society of America's international competition for a violin he made. (Image: Screenshot via YouTube)

“Sorry! My husband is deaf…” This is what Xian Baokang’s wife said to the judges of the 13th Violin Society of America (VSA) International Competition listening on the other end of the phone. The people she was speaking to could hardly believe their ears and kept passing the phone back and forth with everyone asking: “What? Please say that again!”

You might think the judges kept asking the same question over and over again because Xian Baokang’s wife just did not properly express herself in English regarding her husband’s deafness, but this was clearly not the reason. It is because people find it unbelievable that a deaf person could actually make a functional violin, let alone one fit for high-class competition. To top it all off, Xian Baokang even won the grand prize that year!

Baokang is indeed a deaf person. He was born in 1955, and in his first year of life, he came down with measles and a persistent high fever. An overdose of streptomycin left the baby permanently deaf in both ears. Related to this, the Chinese Communist National Health and Family Planning Commission recently admitted that 60 percent of the deaf children in China lost their hearing due to the abuse of streptomycin. So the 1-year-old Baokang unfortunately became a member of the “streptomycin victim group” in China.

The discovery that Baokang was deaf struck the family like a thunderclap. His deafness was confirmed by experts in the Beijing Children’s Hospital. The diagnosis was that Baokang had lost a considerable amount of hearing for high-pitched sounds and only a small part of the mid-bass area was retained. Later, at the age of nine, Baokang finally acquired hearing aids that his father bought from a friend in Japan. Following that, he started to learn to speak slowly.

She played the violin for many years and had studied with the distinguished violinist Ma Sicong. Ma Sicong was also a composer, and was referred to in China as “The King of Violinists.” Such a music master is naturally well-liked and in high demand as an instructor. The number of people who could study under Ma Sicong as professional students was very few. This shows that Baokang’s mother had very great musical ability.

In 1966, the onset of the perverse Cultural Revolution was inescapable for the family. Baokang’s father was labeled a “Japanese spy” because he had studied in Japan and had Japanese friends. His mother was labeled a “bourgeois stinky intellectual.”

The Red Guards raided the Xian family’s home several times and confiscated everything. They even smashed and stomped on a priceless Italian violin owned by Baokang’s mother. Baokang was very frightened. He was terrified by the destructive rampage. Although he could not hear and could not talk, he could clearly see the Red Guards smash the violin into pieces. He sensed his mother’s distress. After the Red Guards left, Baokang knelt before his tearful mother and gestured: “Mama, I’ll make you one.”

For decades, Baokang never changed his mind. In an interview with reporters, he revealed: “Since that time, I decided and inwardly vowed to make a violin exactly the same as the one my mother lost.” Later on, he literally used a piece of wood to carve out a violin. His mother looked on and cried bitterly holding her son.

Seeing his son’s enthusiasm for making violins, Baokang’s father, an expert in thoracic surgery at a medical university, went to Japan to give lectures. While he was there, he bought a schematic diagram that resembled exactly his wife’s Italian violin through his Japanese friends. He just wanted to fulfill his son’s wish and soothe his wife’s pain.

From then on, Baokang immersed himself in making violins. In 1973, Baokang completed the first violin on his own and gave it to his mother. “What do you think of it?” His mother answered: “Quite good. Not bad.” Her son again asked his mother: “How is it compared with that one of yours?” His mother gestured about the gap with her hands. Baokang blushed, knowing that he was still far away from making a quality violin.

From 1986 onward, he started to send violins he had made to France, Italy, and the United States for participation in competitions. He wanted to have his work acknowledged by the most distinguished virtuoso bodies of accreditation.

In 1998, Baokang won the Violin Sound Quality Excellence Award in the 13th VSA international competition. The judges called from overseas to congratulate him. It was at this time that Baokang’s wife told the astonished judges on the other end of the phone that her husband was a deaf person.

The deaf Xian Baokang won awards abroad, and his success story appeared in American newspapers. However, there was no news of his great achievements in the media in his own country!

The results of the VSA international competition actually came as a shock. The higher-than-usual judging criteria of that year had caused many hopeful candidates from Europe and America to be taken off the list of possible winners, yet the deaf Xian Baokang emerged as the winner of the VSA gold medal!

However, the mean-spirited Chinese Communist authorities hid the great news from the Chinese people that one of their own had achieved such rare international success and recognition, which was a huge honor for the country.