MI6 Chief Thanks China for a ‘Cringeworthy’ Parody of James Bond 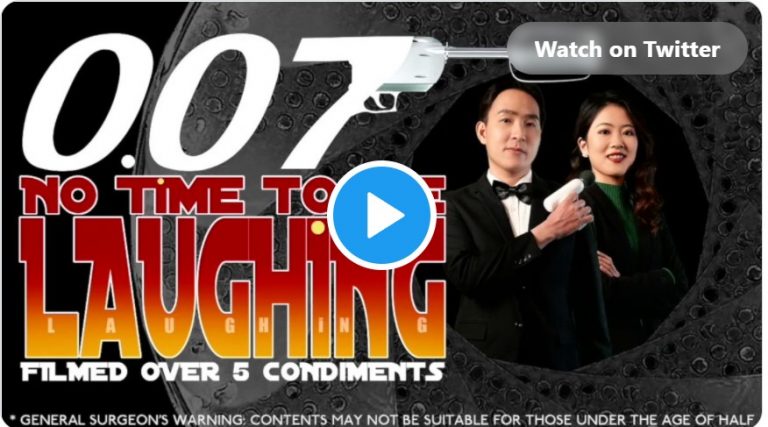 Netizens were not thoroughly impressed by what was supposed to be a witty parody. (Image: via Twitter)

This is a deliberate attempt at mocking the very popular spy depicted in the 007 films, James Bond. However, the British spy agency’s chief has reacted differently to the development. Richard Moore, whose codename is C, has expressed his thanks to Beijing for free and unexpected publicity.

When all your jokes are made in China

China’s Xinhua news agency unveiled a four-minute video featuring two caricatures modeled on James Bond and Black Widow. The spoof video is No Time to Die Laughing, a sarcastic take on the latest 007 movie No Time to Die, which hit the theaters last year.

The spoof covers issues like the U.S. concern over China’s military growth and allegations of tapping phone software. It also makes a mockery of several U.S. allegations against China.

The writers of the parody tried to include some pop culture references like ExSqueeze Me, which was used twice, but the essence of the comments fell flat. There was a jibe at former U.K. Prime Minister David Cameron and former German Chancellor Angela Merkel, but that’s irrelevant now that neither is in office.

Consequently, the more than 4-minute-long parody drags on unsuccessfully, as viewers are left wondering when it is ending or what the joke is.

MI6 chief expressing thanks to China

And in a rare response, MI6 chief Richard Moore tweeted back, thanking the Chinese state media for the free and unexpected publicity to his speech. He also linked his address where he made the “China” comment.

The spoof video was released in response to a speech given by Moore in November of last year, where he lashed out at Beijing for its secret data collection measures and tactics to lure developing countries into debt traps. In 2020, the British government said it would gradually remove the Huawei-made kit from its latest 5G phone networks.

The spoof video was an attempt to make fun of the CIA and MI6 for their alleged attempt to malign China on the global stage and tarnish its otherwise self-perceived perfect international image by concocting outrageous stories about its human rights records.

Netizens were also not thoroughly impressed by what was supposed to be a witty parody.

Not Beijing’s first attempt at ‘humor’

Chinese state media needs to address grave issues within its own country with similar wit. But we can be assured that if there is a parody of China’s policies, from the Uyghur human rights violation to the government’s expansionist ideas, it would be immediately blacked out by President Xi.

“He always did have an inflated opinion of himself.” — James Bond