Windmills: An Integral Part of Life in the Netherlands 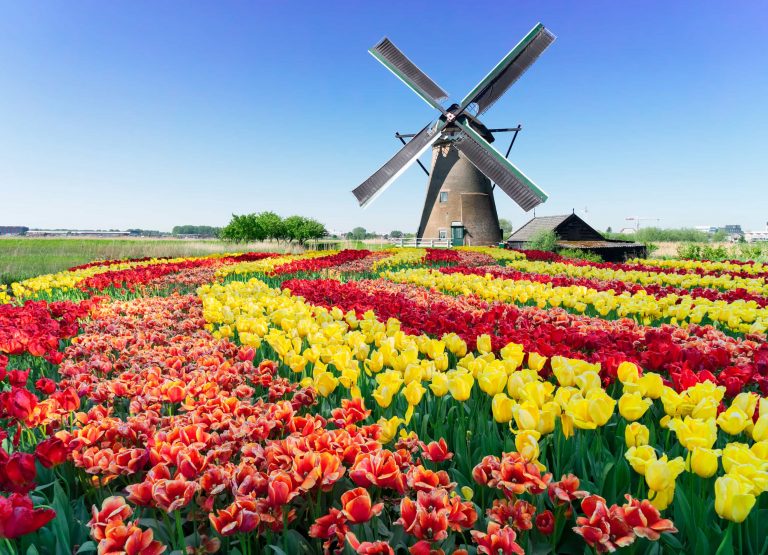 The windmill was not a Dutch invention, but the people in this low-lying country understood their utility before other nations harnessed their power. (Image: Neirfy via Dreamstime)

Windmills are known worldwide as an iconic symbol of Dutch culture. Some 1,200 historic wind and watermills survive today, most of which are gristmills or polder mills. Several Dutch villages are known for their concentration of these structures, including Kinderdijk, Zaanse Schans, and Schiedam, home to the tallest windmill in the world.

Those exploring the Netherlands for the first time feel curious about the sight of windmills. They are not there just for enhancing the landscape, as the Dutch people use these structures for multiple uses.

A section of the country is low-lying and unless the water is pumped out, the land will remain submerged. Some windmills in the country are used for that purpose even now. The remaining ones are used for multiple purposes, such as producing paper and paint, grinding grain and spices, and sawmills. Dutch windmills also leverage wind energy.

The Dutch were the first to realize the usefulness of windmills

The windmill was not a Dutch invention, but the people in this low-lying country understood their utility before other nations harnessed their power.

The Dutch people began using windmills in the 12th century. In the beginning, they were mostly used for grain grinding needs. Later, they started using them to reclaim the land. They successfully drained big lakes near Amsterdam and enhanced the volume of agricultural lands and polders. A polder is a low-lying tract of land that forms an artificial hydrological entity, enclosed by embankments known as dikes.

The draining of Beemster Lake in 1612 was possible with the use of as many as 42 windmills, which was a record at the time. The resulting Beemster polder was given the status of a UNESCO heritage site. Other areas in the country that were drained in the 17th century using these structures include Heerhugowaard, Schermer, Purmer, and Wijdewormer.

As technology progressed, the Ditch started using steam-powered windmills. In the 19th century, these were pressed into service for draining larger lakes. Haarlemmermeer was reclaimed using 3 large capacity steam-powered mills.

The Dutch also enhanced windmill technology to improve output. They segregated them into two parts. The upper part rotates following the direction of the wind, while the lower part is utilized for storage.

Windmills near Schiedam were very high and had plenty of storage capacity. They also deployed an ingenious cogwheel system and started using crankshafts. This mechanism helped them extract the most out of the windmill’s power.

The enormous shipbuilding industry in the Netherlands also thrived owing to the prudent usage of these structures. Their use as sawmills also played a key role in the economic development of this country in the 17th century.

After the Second World War in the 20th century, economic and technical developments brought the vast majority of the last windmills to a standstill. Fortunately, the mill protection starts to come to full development after this period.

Nowadays, windmills are monuments that are protected. And thanks to the efforts of many volunteers, wind and water mills are regularly in operation. With that, they attract attention, and the interest in this traditional Dutch tool increases again.

There are about 1,050 windmills and 150 watermills in the Netherlands. However, many of these are not used for any industrial work nowadays.

Still, some Dutch mills are fully operational and you can see them in action. The well-preserved units, situated in serene and picturesque locations draw tourists from many countries. Tours are often offered for free.

Tourists throng to several windmills, including those at Kinderdijk, Zaanse Schans, and Schermerhorn. The water management system and windmills at Kinderdijk are impressive and received UNESCO world heritage site status. The other two locations are also popular, as the windmills in Schiedam are the tallest, while there are over 900 of these structures in Zaanse Schans that are used for multiple purposes.