Do Plagues and Their Impacts Show Intelligence?  (Part 1) 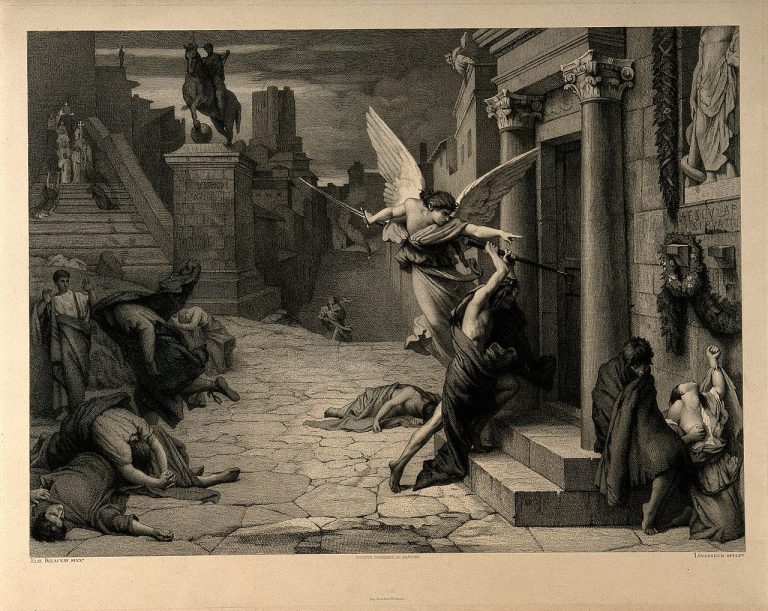 The angel of death striking a door during the plague of Rome; engraving by J.G. Levasseur after Jules-Elie Delaunay, c. 1823. (Image: via Public Domain)

Since the existence of humanity, the development of human civilization has always been accompanied by plagues. Statistically, more people were killed through plagues than by war and famine.

Despite experiencing many plagues, large and small, humans have still not been able to identify some of their strange characteristics. They come and go without a trace and can cause fatal damage to human beings, but it does not hurt some people. People cannot help but ask: “Where did the plague come from?”, “Could it be that in the face of the plague, human beings would be on the defensive forever?”

The plague that destroyed the Roman Empire

The mighty ancient Roman Empire once spanned Europe, Asia, and Africa and had the ambition to dominate the world. However, it finally declined and fell apart after four significant plagues. The four great plagues were: the Plague of Athens (430 BCE), the Antonine Plague (165 CE), the Plague of Cyprian (250 CE), and the Justinianic Plague (541 CE).

The four plagues were mysterious. For example, each time the brutal persecution of Christians by the Roman Empire took place, a great plague would appear and turn the prosperous empire into a living hell.

Its mode of transmission was elusive and could not be prevented. Sometimes, only one or two households were infected in a city while the rest were safe. Some people were not infected even though they had escaped from the plague but died of it the following year.

The plague does not discriminate, irrespective of whether the person is a young man with a muscular body or a weak woman, child, or the elderly; there is no difference between the rich, noble, or poor in the eyes of a plague. However, a plague would turn away from those who insisted on treating infected Christians who were being persecuted.

The Black Death, the most fatal bubonic plague pandemic recorded in human history and the second great natural disaster in Europe during the Middle Ages, was a deadly plague that terrified people when they talked about it. It is estimated to have killed a third of the European population. Between 1350 and 1400, the average lifespan of Europeans was shortened by 10 years.

The Black Death spread all over Europe by land and water. Wherever it went, affected cities would be paralyzed, some villages even disappeared forever, and the Hundred Years War between Britain and France could not be fought and had to stop temporarily. Then, when all the countries were at a loss, the Black Death suddenly disappeared in 1353 just as the army retreated collectively after completing its combat mission.

Although, on the one hand, the Black Death did not discriminate in claiming its victims, on occasions, it showed some strange selectivity. Some regions were destroyed, while others were completely immune. Some people held on to their relative’s dead bodies, hoping to die and rejoin them, but they were not infected.

Do plagues have intelligence?

The same seemed to be true of the plagues in the East. Take the example of the bubonic plague in the last phase of the Ming Dynasty, which was a major plague epidemic that caused the deaths of more than half of the country’s population between 1633 and 1644.

Surprisingly, very few soldiers from Li Zicheng’s army who invaded Beijing were infected with the disease. After the end of the Ming Dynasty and when the Qing Dynasty took over, the plague suddenly disappeared and no one in the Qing Dynasty was infected. One cannot help but ask: “Do plagues have intelligence?” “Do they occur with a purpose?”  “Is it the will of God?”

According to Chinese folklore, the Epidemic God (瘟神) is a deity responsible for illness, plagues, and disease and commands the “ghost of plagues” to spread the disease.

In the Taoist classic Severe Plagues and Destroy Diseases it is said: “The human heart is destroyed, the five emotions are mixed, people either guard against each other with suspicion or become inhumane, kill with no mercy, are disloyal and not filial, have no love and no mercy, live a life of indulgence and damage the body from inside. In this state, the internal and external evil qi started to attack, making it conducive for the plague to enter the body.”

If you examine the few great plagues, such as the epidemic attacking the ancient Chinese people, you will be surprised to find that the characteristics are all the same. This was also the case in Europe when the Black Death hit, known as “God’s whip.”

At that time, William Edington, an English bishop, said: “How terrible human indulgence is. Now it is intensified, and has provoked the wrath of God. This catastrophe is God’s punishment for the many sins of mankind.”

Later generations considered the four major plagues that struck ancient Rome to be a punishment from God. The Romans at that time were not only morally depraved, but their people were promiscuous, brutally crucified Jesus on the cross, and bloodily persecuted the Christians. They violated the will of God and committed an enormous sin. These disasters are retribution and punishment on humans for false beliefs, moral corruption, and wickedness.

If the plague is following the will of God, then it has intelligence and can choose the mode of transmission, the target of the infection, and it comes and goes without a trace. All these can be explained, and the best way to avoid the epidemic is also on the horizon.

Let’s look at a miracle that occurred during the Black Death in the Middle Ages. It was in Oberammergau in Bavaria Germany. During the ravages of the Black Death, one person in every two households in the village died, and the remaining villagers were terrified. So people knelt down and, led by a priest, prayed devoutly to God.

They vowed that if God saved them from the plague, they would put on the Passion Play every 10 years until the end of the world. “The Passion Play begins with the Entry into Jerusalem and tells the Passion from the Lord’s Supper through to the Crucifixion and ends with the Resurrection.”

According to word of mouth from the ancestors, from the moment the people made the vow, the Black Death never took a single life of the villagers again. From 1634 until today, the people of Oberammergau are still delivering on their promises.

In those few great plagues, while many people once prayed for the protection of God they believed in, some of the prayers were effective and some had little effect. So what is the difference? The key lies in the word “piety.” It’s not about superficial piety, how much money you donate to the church, or how nice it sounds. It refers to the essential thoughts in the human heart.

If you truly believe in God, you should act according to God’s requirements, have good conduct, take lightly materialistic desires, pay attention to morality, be charitable, and have no resentment or hatred. How can it be effective when you say that you believe in God and pray for God’s blessing while doing evil things that go against God’s words?