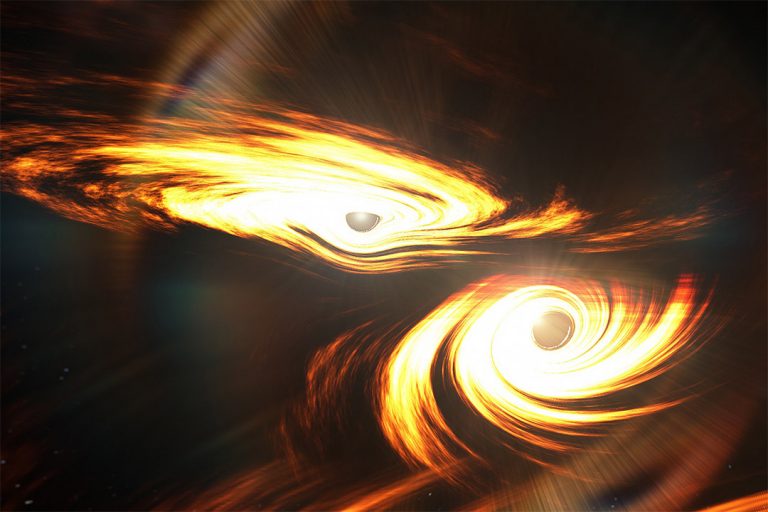 Findings by the Center for Computational Relativity and Gravitation published in ‘Nature Astronomy’. (Image: Mark Myers via ARC Centre of Excellence for Gravitational Wave Discovery (OzGrav))

For the first time, scientists believe they have detected a black hole merger of two black holes with eccentric orbits. According to a paper published in Nature Astronomy by researchers from Rochester Institute of Technology’s Center for Computational Relativity and Gravitation and the University of Florida, this can help explain how some of the black hole mergers detected by LIGO Scientific Collaboration and the Virgo Collaboration are much heavier than previously thought possible.

Eccentric orbits are a sign that black holes could be repeatedly gobbling up others during chance encounters in areas densely populated with black holes such as galactic nuclei. The scientists studied the most massive gravitational wave binary observed to date, GW190521, to determine if the black hole merger had eccentric orbits. Carlos Lousto, a professor in the School of Mathematical Sciences and a member of the CCRG, said:

“The estimated masses of the black holes are more than 70 times the size of our sun each, placing them well above the estimated maximum mass predicted currently by stellar evolution theory. This makes an interesting case to study as a second generation binary black hole system and opens up to new possibilities of formation scenarios of black holes in dense star clusters.”

A team of RIT researchers including Lousto, Research Associate James Healy, Jacob Lange ’20 Ph.D. (astrophysical sciences and technology), Professor and CCRG Director Manuela Campanelli, Associate Professor Richard O’Shaughnessy, and collaborators from the University of Florida formed to give a fresh look at the data to see if the black holes had highly eccentric orbits before they merged.

They found the merger is best explained by a high-eccentricity, precessing model. To achieve this, the team performed hundreds of new full numerical simulations in local and national lab supercomputers, taking nearly a year to complete. Campanelli said:

“This represents a major advancement in our understanding of how black holes merge. Through our sophisticated supercomputer simulations and the wealth of new data provided by LIGO and Virgo’s rapidly advancing detectors, we are making new discoveries about the universe at astonishing rates.”

An extension of this analysis by the same RIT and UFL team used a possible electromagnetic counterpart observed by the Zwicky Transient Facility to compute independently the cosmological Hubble constant with GW150521 as an eccentric binary black hole merger. They found excellent agreement with the expected values and recently published the work in the Astrophysical Journal.

Provided by Luke Auburn, Rochester Institute of Technology [Note: Materials may be edited for content and length.]