At This Armenian Restaurant, Satellite Dishes Serve as Ovens 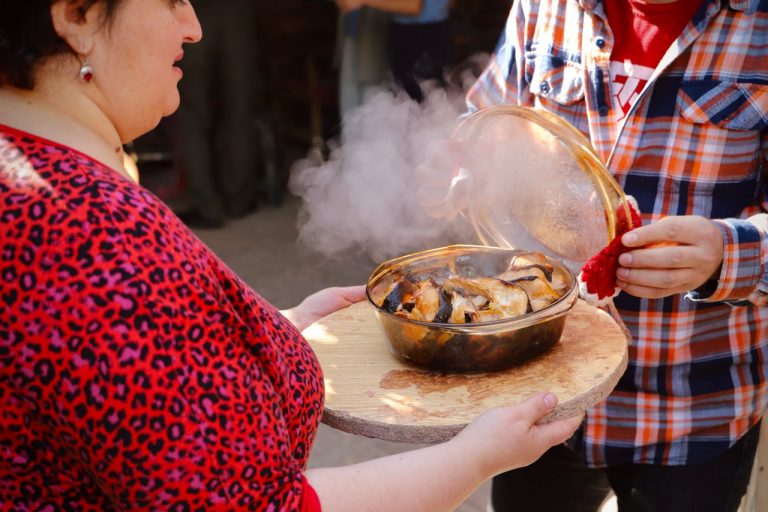 A fantastic Armenian restaurant offers many dishes, and you can taste some delicacies of Armenian cuisine such as Marash, Ailazan, and nettle soup. However, the “Sunny Meals” section is what most customers opt for. This is also known as the Armenian restaurant’s satellite dishes.

The customers of Machanents restaurant may choose the dish, mostly trout, chicken, eggplants, or beef. The food is then sent to the kitchen. But the noteworthy thing is the chefs here do not light up any oven or stove for cooking. Instead, they take the materials to the backyard section, where the large satellite dishes are placed.

Harnessing the power of the sun

These meals are then cooked by harnessing the power of the sun. The chefs use glass pans so that sunlight can heat the food well.

How long does it take to cook food using the dishes and sunlight? On mildly sunny days, the cooking time is around 20 minutes. But on bright days, it is less than half of that! On summer days, the pan reaches a temperature of 700ºC, so dishes are cooked in less than 10 minutes, quickly. However, on cloudy days, it will not work.

Vahan Hamazaspyan and Gregor Mnatsakanyan, two talented Armenian scientists, made the satellite dishes. Hamazaspyan is skilled in solar energy usage, and the prototypes were made in the 1980s. Then, he thought of developing satellite solar ovens to aid his fellow citizens, which led to the innovation.

Necessity is the mother of invention

The invention was also somewhat necessitated by the long-time border conflict with Azerbaijan. When Azerbaijan and Turkey closed their borders with Armenia, getting a supply of Russian gas became very hard.

Hamazaspyan could also not obtain government support for the mass distribution of the satellite dishes. He rues that the plates are so simple and effective, but support from the government is non-existent. It costs US$200-$600/unit, and government intervention could reduce the price tag.

In the words of director Narine Muradyan: “The main difference of using the satellite-reflection technique is that, in a regular oven, the heat comes from the outer surface to the middle. With the satellites, because the mirrors are designed to redirect the heat to the middle of the pan, the heat emanates from the center.” This ensures the foods are cooked perfectly, and there is no scope for uneven heat distribution.

The restaurant, where these satellite dishes are used, focuses on using fresh produce and meat. But, Muradyan adds: “We have to make sure it’s as fresh as possible, from the catch of the day so that we can get all this juiciness.”

While this Armenian restaurant deserves applause for using innovative techniques and harnessing solar energy to make some of its meals, it is certainly not the only one to do so. There are a handful of eateries in some countries that harness solar power for cooking, too.

Hamazaspyan is happy with the restaurant, but he thinks the government takes a lackadaisical approach to promoting solar energy. As a result, his project is not being utilized on a large scale.

“The ultimate aim should be focused on helping people eat better, not just on companies and business,” he adds. The technology, Hamazaspyan says, is easy, safe, and affordable. And, after all, the sun shines for everyone.