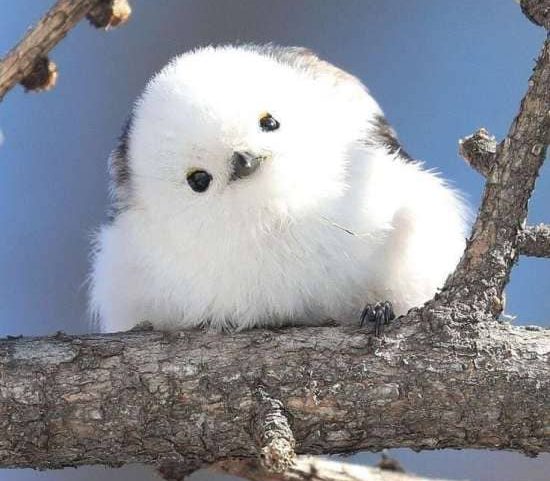 What bird that makes you think of a cotton ball? (Image: via Aubtu.biz)

The Shima Enaga are tiny birds (at 5-6 inches in length, including their tail at 3-4 inches. Males and females are identical. A unique trait about the species is that both male and female birds protect the nest.

There are several species in Asia, but you can find the all-white variety on Hokkaido island in Japan. The island has six national parks and several prefectural parks; thus, the island is the habitat of many wildlife species, including the Japanese Macaque, Whooper Swans, and the Shima Enaga.

Though the long-tailed tit is widespread from Western Europe across Russia to Japan, there’s nothing quite like Hokkaido’s unique variety.

The Shima Enagas found on the island have a pure white face. Varieties found elsewhere have patches of brown. In addition, varieties elsewhere have distinct black “eyebrows,” but the Hokkaido variety loses the eyebrows as they grow up. The all-white appearance also helps the birds blend seamlessly into the winter landscape, which allows them to avoid predation.

Still, the small size of the birds often poses survival hurdles. In addition, they do not fare well in harshly cold climates. Long spells of cold lead to their demise, as has often been observed. However, the redeeming aspect is that they breed quite well.

A bird can lay 7-10 eggs at a time. Females sit motionlessly on the eggs for 10 to 12 days. Raising these adorable birds is a community undertaking, with other adult Shima Enaga birds that have failed to breed often stepping in to help feed all the hungry mouths. They’ll take turns bringing insects back to the nest with the parents until the chicks grow old enough to fend for themselves.

Watch this video of the incredibly cute Shima Enaga:

It takes 20 more days for the chicks to become strong enough to leave the nest, and that means, during this period, the parents and others have to keep them constantly fed — a challenging task for any parents, irrespective of the species.

You will often hear Shima Enagas before you see them; they have a constant and high-pitched call. Outside of the breeding season, they live in flocks of 10-20 birds, composed of parents and offspring that mostly make up the flock; they like to stick together.

Wondering birds from other flocks sometimes join, and, together with other adult birds, they help raise the brood. Still, these birds remain highly territorial for the most part and will protect their territory against neighboring flocks.

The Shima Enaga is insectivorous all year long. They mainly eat arthropods and prefer eggs and astronomical giant moths and butterflies, but sometimes they eat vegetable matter.

Japanese people are very fond of this bird, which explains why many Japanese foods and merchandise are themed. With their fluffy little round bodies, it’s no wonder they’ve been transformed into adorable stuffed animals. There are also several Internet memes based on Shima Enaga birds.

If you want to photograph the Shima Enaga, you should join a group or individual tour for your photography expedition. Finding these birds by yourself on this island can be difficult, if not impossible, and there are only a handful of pro photographers and guides in Japan who know the habitats and habits of these birds.

But these beautiful fluffy birds also inhabit the entire Paleatrictic realm but primarily occur in Hokkaido, Japan. Females from spring to autumn tend to wander into neighboring territories, while males remain within their winter territories.