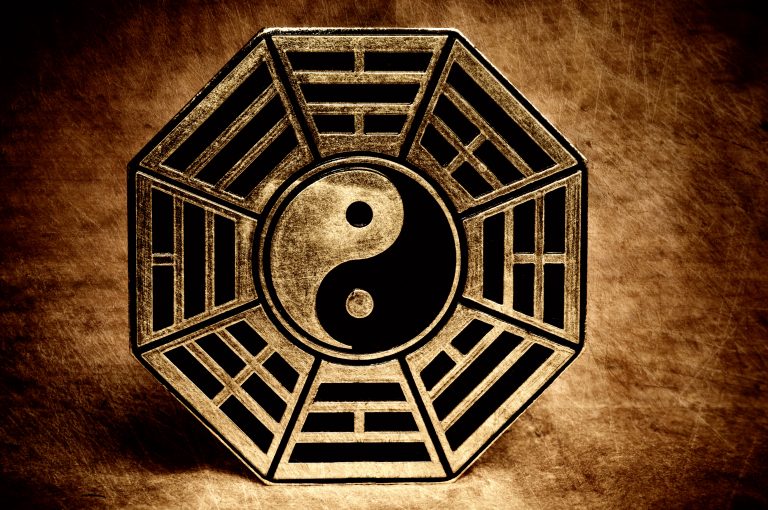 Yin and yang, the inescapable principle of duality in all things. (Image: Starblue via Dreamstime)

Pangu is a central figure in Chinese Daoist legends of creation. He shaped the earth by chiseling out valleys and stacking up mountains. All this was accomplished from Pangu’s knowledge of yin and yang, the inescapable principle of duality in all things.

Pangu, the first man, is said to have come forth from chaos (an egg) with two horns, two tusks, and a hairy body. Some accounts credit him with the separation of heaven and earth, setting the sun, moon, stars, and planets in place, and dividing the four seas.

According to the book Yu Yun Nian Li Ji by Xu Zheng, the sun and moon of China were transformed into two eyes of Pangu. While the sun was the left eye, the moon was the right eye. This gave birth to the original Chinese “male left, female right” tradition.

The “male left, female right” tradition also has a close connection with Chinese philosophy. Traditionally, two opposite sides are in complete yin and yang. Ancient Chinese classified long, big, left, and up items as yang and the opposite (short, small, right, and down) as yin. While yin was weak and soft, yang was strong and firm. When it comes to temperament, a man is more like yang, the left, while a woman is gentle and more like yin, the right.

Even in traditional Chinese medicine, doctors checked the left pulse for men and the right pulse for women. This custom may not relate to other cultures, but people of Chinese origin adhere to it even now.

The yin and yang theory comes from the Tao School. For example, it was believed that things that face the sun were regarded as yang and the reverse was yin. However, this concept found its extension in location, climate, state of motion, and so on.

All things in nature

All things in nature have two opposite sides that co-exist. While both sides are complementary, it is also a unity of opposites. The movement that takes place together causes evolution, becoming, dying, and changing. Yin and yang represent heaven and earth, the mother of change, and the commencement of life and death.

Yin and yang will explain opposites and analyze two opposite sides of the same thing. Things outward, in violent motion, hot, upward, or bright are considered yang. Yin is things that are inward, cold, downward, quiet, and weak.

The comparison can be drawn for Heaven and Earth too. Since the sky is clear and bright, it is considered yang. On the other hand, soil (earth) is turbid and heavy, hence yin. The same stands for fire and water. Water is yin, as it is cold and peaceful; fire is yang, as it is burning and hot.

Like many traditional theories, yin and yang claim that fire, wood, earth, water, and metal — the five fundamental elements represent a relationship between various changes. All these five elements are in continuous motion and movement, leading to mutual generation and limitation simultaneously.

Many ancient philosophies are based on this theory. Many subjects like mathematics, astronomy, music, meteorology, medicine, and chemistry have their development attributed to yin and yang.

There is an interesting description in the Tai Chi chart by Zhou Dunyi. It shows that when there is boundless emptiness, Tai Chi is produced. Yang is generated from the movement of Tai Chi.

Again, when there is extreme movement, it turns into silence, and from this silence, yin generates. Similarly, when there is intense silence, it transforms into action, and it continues. This stillness and movement originate from one another. Yin and yang stand as opposites.

The result is that yin and yang are generated from Tai Chi, and through their interaction, various things are born, from which many other things produce, and infinite changes keep on taking place. Therefore, in traditional culture, yin and yang are fundamental concepts that no one can ignore.