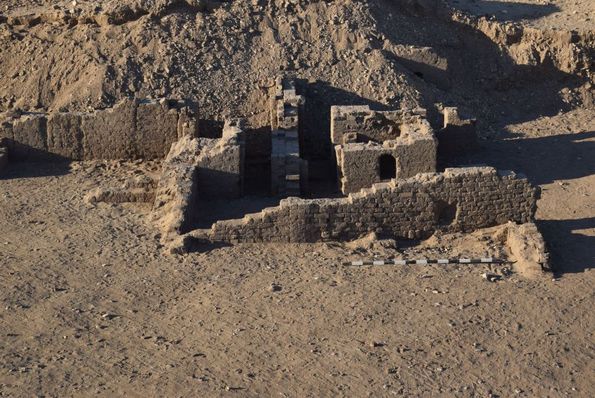 Egyptologists have recovered more than 18,000 inscribed potsherds in ancient Athribis — the remains of vessels and jars that served as writing material some 2,000 years ago. The potsherds, known as ostraca, document lists of names, purchases of food and everyday objects, and even writing from a school, including lines written by pupils as a punishment. It is very rare to find such a large volume of ostraca. They were recovered during excavations led by Professor Christian Leitz of the Institute for Ancient Near Eastern Studies (IANES) at the University of Tübingen in cooperation with Mohamed Abdelbadia and his team from the Egyptian Ministry of Tourism and Antiquities.

In ancient times, ostraca were used in large quantities as writing material, inscribed with ink and a reed or hollow stick (calamus). Such a large quantity of finds has only been made once before in Egypt, in the workers’ settlement of Deir el-Medineh, near the Valley of the Kings in Luxor. The ostraca now recovered provide a variety of insights into the everyday life of the ancient settlement of Athribis, nearly 200 kilometers north of Luxor.

Most potsherds are inscribed in Demotic

Around 80 percent of the potsherds are inscribed in Demotic, the common administrative script in the Ptolemaic and Roman periods, which developed from Hieratic after 600 B.C. Among the second most common finds are ostraca with Greek script, but the team also came across inscriptions in Hieratic, hieroglyphics, and — more rarely — Coptic and Arabic script.

“These sherds show various figurative representations, including animals such as scorpions and swallows, humans, gods from the nearby temple, even geometric figures.”

The contents of the ostraca vary from lists of various names to accounts of different foods and items of daily use. A surprisingly large number of potsherds could be assigned to an ancient school, the research team said, adding:

“There are lists of months, numbers, arithmetic problems, grammar exercises and a ‘bird alphabet’ — each letter was assigned a bird whose name began with that letter.”

A three-digit number of ostraca also contain writing exercises that the team classifies as punishment: The potsherds are inscribed with the same one or two characters each time, both on the front and back.

Tübingen Egyptologists have been working in Athribis since 2003, and since 2005 as part of a 15-year research project funded by the German Research Foundation. The aim was to uncover and publish a large temple built by Ptolemy XII, the father of the famous Cleopatra VII. This project has now been completed and the temple is open to visitors.

The sanctuary was built about 2,000 years ago for the lion goddess Repit and her consort Min, and was converted into a nunnery after pagan cults were banned in A.D. 380. Since spring 2018, excavations have been underway west of the temple at another sanctuary, and the team has come across the numerous ostraca in the rubble. The excavations are ongoing.

Excavation director Marcus Müller faces increasingly challenging tasks on-site as the depth increases. In the west of the excavation area, multi-story buildings with staircases and vaults are now coming to light; the rest of the area has been filled in with rubble over the centuries. The analysis of the ostraca by an international team, mostly from France and Germany, is coordinated by Sandra Lippert, head of research at the Centre national de la recherche scientifique (CNRS) in Paris. The pictographic ostraca are being investigated by Carolina Teotino at the University of Tübingen. The excavations are financially supported by the Gerda Henkel Foundation, the Brunner Foundation, and the Humanism Foundation.

Provided by University of Tübingen [Note: Materials may be edited for content and length.]