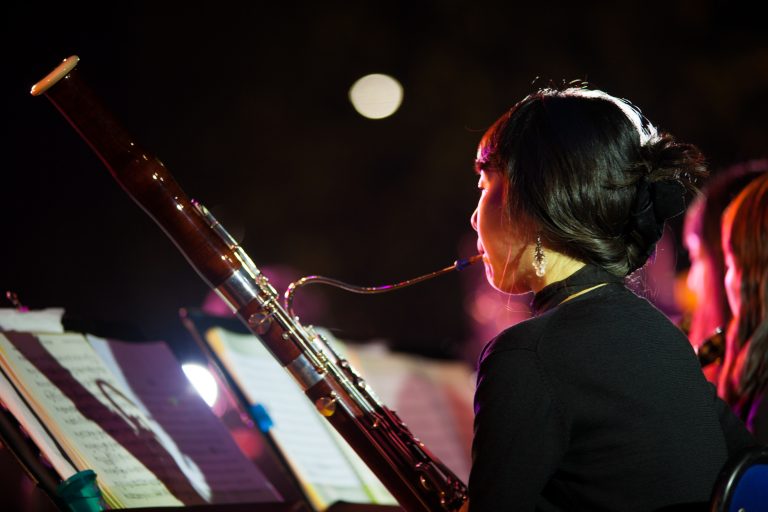 Because of their versatility, bassoons have been used in orchestras for a very long time. (Image: Pius Lee via Dreamstime)

The bassoon is a double-reed woodwind family musical instrument. It is typically a low-pitched instrument. Air passing between two reeds causes them to vibrate to deliver their distinct sound.

The bassoon was created after tweaking a renaissance era musical instrument called the dulcian. The dulcian was made of a single piece of wood, and it did not have keys. However, in its present form, it is made with many pieces of wood and it has 17 keys.

The bassoon is typically played while sitting using a seat strap, but it can be played while standing if the player has a harness to hold the instrument. Sound is produced by rolling both lips over the reed and blowing direct air pressure to cause the reed to vibrate.

Because of their versatility, these instruments have been used in orchestras for a very long time. There are a variety of larger and smaller bassoons. Still, these days, the most commonly used additional member of the family is the contrabassoon, which sounds an octave lower than the bassoon.

The anatomy of the instrument is quite interesting. There are five parts, and its S-shaped crook is made with platinum or gold. It has nine keys for use with the left thumb, and for the right thumb, there are five keys.

It is an unusually long instrument and can be around 53 inches long. Since the long tube of the instrument has a folded shape, it would reach about 102 inches if extended to its entire length.

The bassoon is the lowest-sounding member of the woodwind family and is perhaps the most versatile. It also has a wide range, and an accomplished musician can use the instrument to generate tones from B1 to F5.

The bassoon comes in two types

There are two types of bassoons — German Heckels and French Buffets. Musicians usually opt for the German version. These are wallet-friendly and tend to produce a better sound. The Buffets are typically made with rosewood, but Heckels is constructed with mahogany wood. However, lightweight woods such as maple are also used.

The instrument generates a rich and round sound, and it supports the other instruments used in an orchestra well. They can also be highly expressive as solo instruments, and their warm vibrato enables them to sound remarkably human, a little like a resonant baritone singer. They are also great for creating punchy rhythmic lines, and as base instruments, they help support the whole orchestra.

Peter and the Wolf is a musical composition written by Sergei Prokofiev in 1936. The narrator tells a children’s story, while the orchestra illustrates it by using different instruments to play a “theme” that represents each character in the story. For example, the bassoon represents the cranky grandfather.

Watch this bassoon solo from Prokofiev’s Peter and the Wolf:

Not everyone with an ear for music is suited to play the bassoon. The person playing the instrument must be tall enough. They also need to possess large hands. However, nowadays, small-sized instruments are also produced.

The instrument’s reeds have to be adequately maintained. They are usually made with bamboo or cane, so the reeds are susceptible to fluctuations in humidity and temperature.

Reeds have to be washed in room temperature water daily. The water must not be cold or hot, or the sound produced will be affected adversely. In addition, the reeds have to be dried well. This helps evade mold formation.