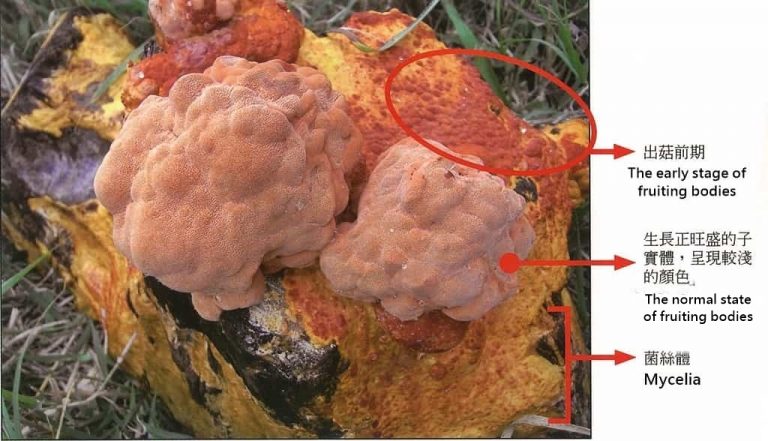 Referred to as “forest ruby,” Antrodia cinnamomea (also known as Antrodia camphorata, Taiwanofungus, or Niu-chang-chih 牛樟芝) is a distinctive miracle fungus endemic to Taiwan. Due to the scarcity of this fungus and its miraculous health effects, it is regarded as a present from Heaven for Taiwanese and a national treasure of Taiwan.

Cinnamomum kanehirae, also known as a small-flowered camphor tree, or stout camphor tree, is endemic to Taiwan. It is distributed over broad-leaved forests at an altitude of about 450 to 2,000 meters (1,476 to 6,562 feet), mainly in the mountain ranges of Taoyuan, Miaoli, Nantou, Kaohsiung, Taitung, and Hualien. As this valuable tree is an endangered species, it is protected by the Taiwanese government as a first-class conservation tree species.

Antrodia cinnamomea is an edible fungus that aborigines traditionally used as folk medicine in the early years after they found it effective in ameliorating hangovers, food intoxication, diarrhea, abdominal pain, fatigue, and enhancing immunity.

It is believed that in 1773, Wu Sha, the famous pioneer in the Yilan area in northeastern Taiwan, was the first person of Han descent to trade with aboriginals to obtain the fungus.

In the 1980s, the fungus started to spread more widely as a food material. Since 1990, universities and public research institutions have actively investigated and studied this unique fungus.

This treasured medicinal fungus was described as new to science and was named Antrodia cinnamomea in 1995 after a relevant thesis was published in Mycological Research. Currently, there are around 40-50 manufacturers producing the fungus in Taiwan, with an annual market value of around US$100 million.

According to Dr. Chen Shui-Tein, chairman of the Antrodia Cinnamomea Association of Taiwan National Treasure (ACATT), and president of a leading biotech company based in the National Biotechnology Research Park in Taipei, hundreds of theses or dissertations on the fungus have been published since 1990. In addition, there were more than 3,000 relevant articles published in international scientific journals over the same period.

Because of the scarcity of the fungus and its miraculous values, demand for the fruiting bodies of Antrodia camphorata has far exceeded the supply in recent decades. The wild fruiting bodies of this miracle fungus can even be sold at about US$25,000 per kg (2.2 lbs).

With developments in fermentation and cultivation technologies, artificial cultivation of Antrodia cinnamomea has been adopted as a substitute nowadays.

It takes about one year to produce fruiting bodies of the fungus via burdock wood. However, they cost more, and the quality is similar to the wild version of the fungus. As to solid-state cultivation, it usually takes approximately six months to obtain Antrodia cinnamomea mycelia.

Solution fermentation is more viable for large-scale production as its average production period is about two weeks. However, it cannot obtain the unique triterpenoids and the rare components commonly found in the fruiting bodies of the wild fungus. Therefore, the extracts from liquid-state fermentation are less effective in anti-inflammatory activity.

Efficacies of the fungus

Numerous studies have suggested that the fungus is effective in preventing and treating various chronic diseases and disorders, including liver diseases, food poisoning, drug intoxication, diarrhea, hypertension, etc. Among others, it can be developed into healthy foods and new drugs.

Dr. Chen Shui-Tein further pointed out that not only is the fungus a remedy of significant efficacy in protecting the liver and preventing various diseases, but it can also lower the risk of COVID-19 infection.

Promotion of the fungus

To promote industrial Antrodia cinnamomea innovation to the entire world, ACATT, with co-sponsorship of Taiwan Academia Sinica, has held some international workshops on the fungus in recent years.

An Antrodia cinnamomea art exhibition, “The Art and Food of Antrodia Cinnamomea,” was held for the first time at the Art Gallery of the Fu Jen Catholic University in New Taipei City in August 2014.

Moreover, the art exhibition was even turned into the Antrodia Cinnamomea Cultural Festival in 2019, when an international symposium on the fungus was held in Taipei in October 2019.

The above article is only a guide. Please consult your traditional Chinese medicine doctor before undertaking any treatment or management plan.