What Lessons Are Conveyed by Little Red Riding Hood? 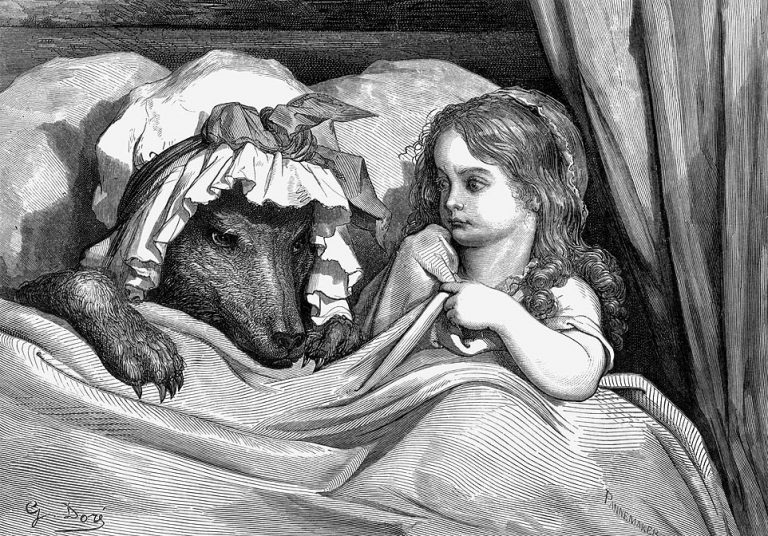 An illustration from ‘Les Contes de Perrault,’ an edition of Charles Perrault's fairy tales illustrated by Gustave Dore and originally published in 1862. (Image: via Public Domain)

There are so many folktales and fables used by people to teach kids important life lessons. The enticing stories are used as the form of imparting the lessons. One such example is the famous fairy tale of Little Red Riding Hood.

This fairy tale revolves around a little girl named Red Riding Hood and an evil and cunning wolf. The fairy tale has been adapted into countless plays and movies.

The story revolves around a girl called Little Red Riding Hood. She is named after the red hooded cape/cloak that she wears. The girl walks through the woods to deliver food to her sickly grandmother.

A Big Bad Wolf wants to eat the girl and the food in the basket. He secretly stalks her behind trees and approaches Little Red Riding Hood, who naively tells him where she is going.

He suggests that the girl pick some flowers as a present for her grandmother, which she does. In the meantime, he goes to the grandmother’s house and gains entry by pretending to be her. He swallows the grandmother whole and waits for the girl, disguised as the grandmother.

When the girl arrives, she notices that her grandmother looks very strange and makes several observations about the wolf’s mannerisms and appearance, at which point the wolf jumps out of the bed and eats her, too. Then he falls asleep.

A woodcutter in the French version, but a hunter in the Brothers Grimm and traditional German versions, comes to the rescue with an ax, and cuts open the sleeping wolf. Little Red Riding Hood and her grandmother emerge shaken, but unharmed.

Then they fill the wolf’s body with heavy stones. The wolf awakens and attempts to flee, but the stones cause him to collapse and die.

Various versions of the story of Little Red Riding Hood

In 1812, the Brothers Grimm published Rotkäppchen, the tale that many know today as Little Red Riding Hood. But the story has much more profound and broader roots than 19th century Germany.

Scholars and in-the-know readers know that the Brothers Grimm borrowed from an earlier French telling of the story, written some two centuries prior. A second story, The Wolf and the Kids, was in oral circulation in Europe and the Middle East much earlier.

There are at least 58 versions of similarly themed stories worldwide, from Japan to Africa to Korea. However, contrary to some scholars’ assumption that the Asian version of the story would be the oldest, The Wolf and the Kids proved to be the first.

What are the lessons conveyed in this fairy tale?

Current tellings of the story often shy away from the violence of the wolf-eating grandma. Fairy tales were told to teach lessons to children and at times intended to scare them away from destructive behaviors.

In our world of highly protective parenting, we don’t seem to want to show them the scary consequences that can occur when they go and talk to strangers, which is the main point of Little Red Riding Hood. But, as awful as it might seem, kids still need to learn to stay away from the Big Bad Wolf.

Consequently, there is an important underlying message in this famous fairy tale. The moral conveyed is it is perilous to take people at their face value. While it is meant for the kids, the inner lesson holds for everyone, literally. It is challenging to see through external layers of politeness and sweetness of people.

A friendly-looking stranger showing interest in your whereabouts may have evil intentions in their mind. Trusting an unknown person may pave the way to danger. So you should not trust an unknown person easily.

It also shows that evil often comes in the disguise of a harmless persona. The wolf appeared harmless when he talked to the girl for the first time. He asked for her route in a naive manner.

However, there was deceit in his mind, and the young girl could not see through his tricks. So the story also reminds us that malicious individuals do not always appear gruesome, and they may come under the guise of gentleness.

There are other lessons to be learned. As kids are not aware of what strangers may have in mind, they should listen to their parents’ advice. If Little Red Riding Hood had listened to her mother’s advice, she would not have faced perils.

It is also not okay to share personal information with unknown persons. She would be safe if she did not tell the wolf the route to her grandmother’s house.