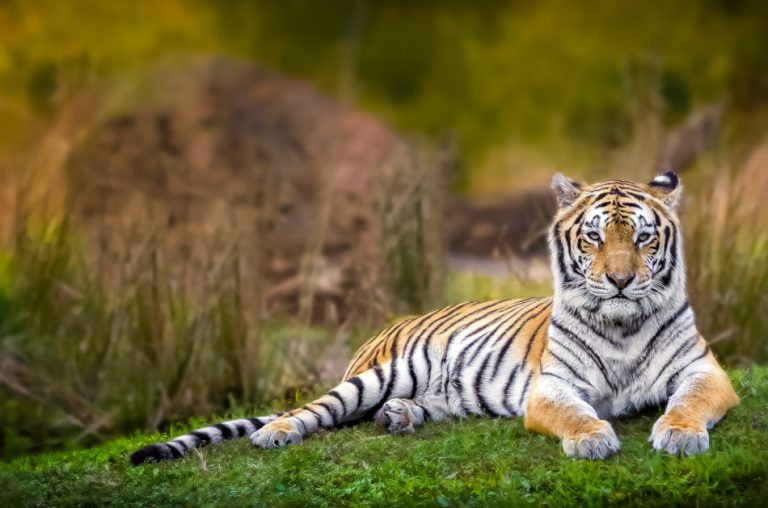 China has many interesting stories about the majestic tiger including these two about spiritual cultivators taming them. (Image: Jonathan Ross via Dreamstime)

Known as the Year of the Tiger, February 1 marks the beginning of the 2022 Lunar New Year. In the eyes of people across the world, the tiger is the most majestic of beasts. He is the king of beasts, and his roar can cause people to tremble and mountains to shake. But when he’s before a spiritual cultivator, the tiger can be as submissive as a domesticated animal. China has many interesting legendary tales about the strength and mystery of this majestic creature. I’d like to share two such legendary tales from the era of the Republic of China (1912-1949).

Xuyun: Taming a tiger so it would not hurt people

In Northern Guangdong, there was an old monastery called Nanhua Temple. One day, General Li Hanhun (1895-1987), while stationed near the temple, decided to go for a visit. But upon arrival, he was shocked at what he saw. The beautiful old temple was so worn down that it seemed almost beyond repair. Moved by the temple’s desolate condition, General Li Hanhun decided to raise funds to repair it. Construction started in September of the 22nd year of the Republic of China, and was completed in August of the following year.

Now back to its former glory, the general invited 95-year-old Xuyun, a renowned Chinese Buddhist master, to preside over the monastery, and he agreed. Xuyun was highly respected, and people from all directions flocked to the temple to ask him to teach and explain the content of the precepts to them. Dignitaries from Guangdong brought their families to the temple, and important military officials brought their soldiers to listen to the Buddhist teachings.

One night, Jiang Shuying, the son of Chinese scholar Jiang Kongyin (1864-1952), was standing on the upper floor where the scriptures were kept, when suddenly, he saw a pair of lights outside the gates of the monastery. But upon closer inspection, he discovered they were not lights, but the eyes of a tiger.

When people saw the tiger, they all screamed in panic. The temple guards quickly picked up their guns, loaded their bullets, and prepared to shoot. Just then, Master Xuyun appeared, and stopped the soldiers from shooting. As Xuyun drew closer, he saw the tiger was lying down on the steps, as if he was begging for something.

Seeing this, Xuyun spoke to the tiger, telling him to retreat to the mountains and not hurt anyone. The tiger had almost a human sense and seemed to understand Xuyun’s words. The tiger knelt down, bowed three times, and turned around to leave. As it was walking away, it turned back to look at Xuyun, as if reluctant to leave.

From then on, the tiger came once or twice a year to visit the monastery. When Xuyun would hear its mighty roar, he would go out to see it and comfort it, before letting it return to the mountains.

Guang Qin: Entering a tiger’s lair and taming the tiger

When Guang Qin was forty-three years old, he packed some simple clothes, along with ten jin of rice, and set out to meditate and practice on Qingyuan Mountain, just to the north of his home in Quanzhou. When he arrived, he discovered a small cave that was several feet wide and decided it was a suitable place to cultivate.

One day, while deep in meditation, he was startled awake by a loud roar. The monk opened his eyes and saw a tiger right in front of him. The tiger looked at him and angrily roared again, as if to say: “This is my territory! How dare you occupy my lair?”

Rather than ushering in a group of tigers to ambush Guang Qin for occupying his lair, the tiger brought his female companion and their cub to the cave. Nearly every day the tiger family would come to visit. The cub would frolic and play in front of the cave where Guang Qin practiced and was as docile and well-behaved as a domesticated animal.

The amazing legendary tales of Xuyun and Guang Qin have been passed down through the generations, and the two have remained legendary figures to this day.