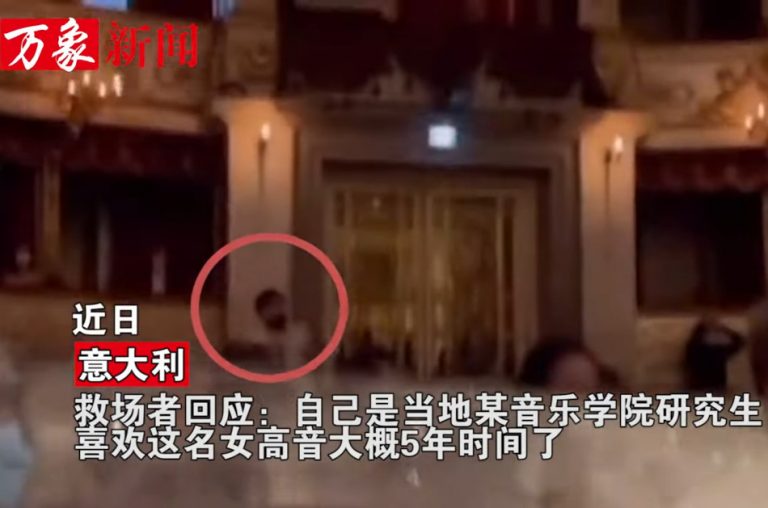 A young opera fan in the audience at the Verdi Festival noticed that the soprano did not have a duet partner for her performance so he boldly stood up and sang the tenor part. (Image: Screenshot via YouTube)

You must have heard time and again that music unites all. Something of this kind happened when a young opera fan stunned a soprano star by singing the tenor part by being “Alfredo” to her “Violetta” in a Verdi recital.

Like every year, the Verdi Festival was hosted in Parma, Italy in 2021. The Festival commenced on 24th September, Friday, and ended on 17th October, Sunday. Anyone fond of Italian operas should not miss this amazing festival. The festival is named after the renowned Italian opera composer Giuseppe Verdi. With top-notch performers, a fantastic orchestra, and excellent stage settings, the festival is one of a kind. Verdi’s operas, which have gained international recognition and popularity, include La Traviata, Nabucco, Rigoletto, and Aida.

During one such performance at the festival, an interesting event happened, surprising the renowned operatic Cuban-American soprano Lisette Oropesa. Lisette was singing Violetta’s ‘Sempre Libera’ from Verdi’s La Traviata, which is something she had previously performed at the Verdi Festival. This time, there was a young Verdi fan in the audience who noticed that the soprano did not have a duet partner. Without thinking much, the young opera fan boldly stood up and sang the tenor part of the performance.

Actually, in the staging of the opera, the tenor who plays Alfredo is off stage. The effect is such that he is singing to Violetta from below her balcony outside. It was Lisette Oropesa’s solo recital, and hence there was no one arranged to sing the part of the tenor. After Lisette finished singing the first bar, no male voice responded to her singing as there was no one for support. However, during the second bar, this young opera fan gathered all his courage and sang the tenor part.

This young opera fan, Liu Jianwei, is a Chinese student at the Conservatorio Giuseppe Nicolini di Piacenza. Not only this, but he is also an ardent fan of Cuban-American soprano Lisette Oropesa. He had simply come to watch the performance of his favorite star and ended up making history!

In the performance, Violetta had to respond by saying ‘”Oh” as this was mentioned in the original score. However, at that moment, Oropesa was so overwhelmed and thrilled that she said “Oh Grazie” instead of just ‘Oh,’ which was a sweet improvisation and addition to the surprising moment which had just happened. Interestingly, the crowd also enjoyed and appreciated the improvisation as it did not hamper the tempo of the performance. Needless to say, the video of this whole performance went viral.

Once the performance was over, Liu Jianwei wrote about it on Chinese social media after he found out that the video took off on TikTok. In fact, Chinese social media called him a “hero” as he played the part of the tenor from the audience. Liu responded to social media by saying that he loved Lisette Oropesa as a musician very much. He also confessed that he had known and learned the tenor part of the aria previously, and thanks to that, he felt he could take this risk. He also added to his comment by saying that he would not do such a singing stunt again.

The young opera fan said he didn’t do anything which was worthy of acclaim or of being prideful. Instead, he requested people not to interrupt singers when they are singing on stage. He considers this to be impolite behavior. He also said: “Don’t imitate me, and I will never do this again in the future.”

After the concert ended, Liu approached Oropesa and offered an apology. However, Oropesa seemed to be grateful to her duet partner for his impromptu performance and support. She gave him her autograph and also snapped pictures with him. This too was widely shared and circulated on social media.