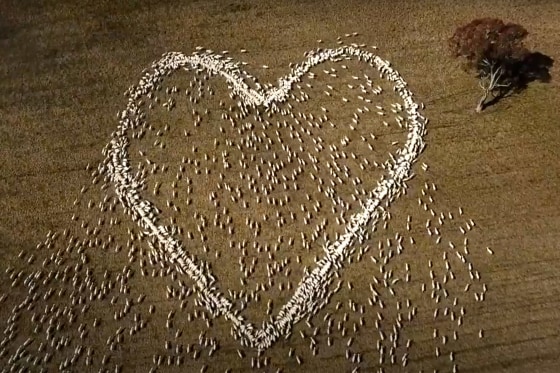 If it is impossible to attend the funeral and last rite of the deceased, relatives pay homage in innovative ways. One was an Australian farmer who mourned his late aunt with his flock of sheep herded in the shape of a heart. He could not attend the funeral ceremony of his aunt owing to the pandemic restrictions. So he decided to pay tribute to the deceased relative uniquely.

The ongoing pandemic has changed the lives of many around us. Some of us have lost our near and dear ones, whereas some of us are finding it challenging to deal with all the upheavals that have been going on around us. However, this Aussie farmer has found a way to deal with his grief by doing something extraordinary that should be appreciated.

The video of ewes taken by a drone flying over the animals was shown to the mourners at the funeral of the aunt of Ben Jackson. He was in New South Wales, which is 430 kilometers away from the location of the funeral.

His aunt succumbed after battling cancer for two years, which started at almost the same time as the pandemic. He was emotional and sad about not seeing his aunt for the last time. Jackson said: “Unfortunately, she didn’t make it. At those times of grief, you feel helpless; you don’t know what to do or say. Especially in these COVID times, no one can prepare for that border closure grief, not being able to say cheerio or be there when she passes. It’s pretty difficult.”

The idea of using the pregnant sheep flock to create a heart shape came when he was feeding the animals. It took more than one attempt to be able to make the heart shape. It took him 3-4 efforts to get the desired outcome. He said: “The first time I tried, it looked like the shit emoji, I tell you, and whilst my Aunty Deb had a good sense of humor, that wasn’t exactly what I was going for. When I saw [the final product], I would be the first to admit that there was plenty of waterworks. It was very lovely to have it as part of a sendoff. It was certainly something that she would have loved and absolutely cherished.”

After the video was shot, it was sent to Brisbane to play at his aunt’s funeral. Jackson said he tried making sheep art when drought affected the region. He used his flatbed truck to feed the sheep flock and figured out they could be arranged in patterns. He scattered the grain in that shape, and the sheep gathered around the grain to eat. He tried creating a giant ABC logo earlier and later followed up with the heart-shaped design.

He was emotional while recalling the times he spent with his beloved late aunt and her long fight with her ailment. He said his aunt was a generous and noble-hearted woman loved by all. Jackson added that his effort was small compared to what the lady had done for him when she was alive. The news of his sheep tribute and the video were shown on Australian TV stations. It also went viral on social media. The viewers were showering praise on him for his creative thinking and efforts. Jackson thinks his aunt would have enjoyed watching the video as well.