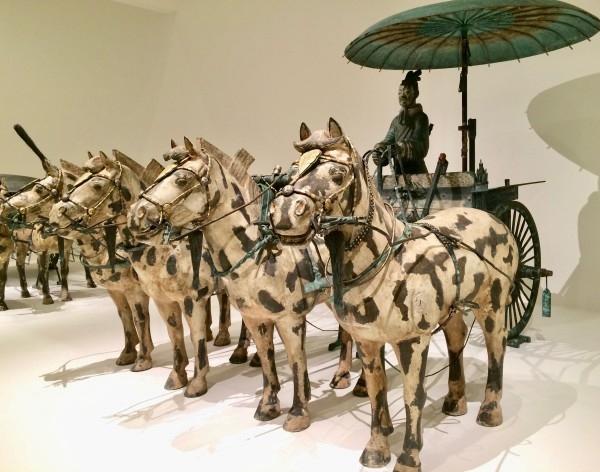 Leading hundreds of veteran soldiers on foot, leaving their horses and chariots behind, Du Hui and his army slashed at Jin horses and armored leaders fearlessly. (Image: via Trisha Haddock)

In the fall of 594 B.C.,  Duke Huan of the Qin state, wanting to expand his territory, ordered his famous commander, the brave and fierce Du Hui, to lead his army to battle the Jin state. General Wei Ke led the combat for the Jin state. The fight broke out at Fu Shi (now Dali, Shanxi Province, China).

Leading hundreds of veteran soldiers on foot, leaving their horses and chariots behind, Du Hui and his army slashed at Jin horses and armored leaders fearlessly. The invincible troop worried General Wei Ke. He decided he could only win by using his wits against such a formidable enemy. So General Wei Ke planned to ambush Du’s army at Green Grass Slope near Fu Shi and lure Du Hui there for the actual fight.

The two armies met, and both sides were fighting hard. Suddenly, Du Hui fell every time he tried to take a step forward. He was in a mess. General Wei Ke saw an older man knotting grass to make Du Hui trip and fall repeatedly. It enabled General Wei Ke to capture him. It meant that General Wei Ke could defeat the Qin army, which brought a great achievement for Jin.

That night, General Wei Ke dreamed of the older man who had knotted grass and tripped Du Hui during the fighting. The old man bowed and said: “My daughter is Zu Ji. I am grateful to you General for obeying your late father’s sensible order to treat my daughter well by not letting her be buried with him when he passed away. Even though I am no longer alive, I am grateful. That is why I came to repay your favor by knotting grass to help you win the battle. General, may you and your descendants enjoy glory, prosperity, and prestige.”

The dream made General Wei Ke realize that a good deed he had done in the past had enabled him to defeat the Qin army on the day.

It was to do with his father, Wei Wu Zi, who had a loving but childless concubine, Zu Ji. Whenever Wei Wu Zi went to war, he would tell General Wei Ke: “Zu Ji is a woman I love. She is still young. If I die, you should marry her to a good family so that she will have a home for the rest of her life. This way, I will be able to rest in peace even if I die.”

However, on his death bed, Wei Wu Zi changed his mind and asked General Wei Ke to bury Zu Ji so that she could accompany him in the underground world. General Wei Ke decided to follow his father’s initial wish. He chose a good family to marry her off to.

When asked why he did not follow his father’s dying order, general Wei Ke said: “While my father was in good health and sound mind, he always told me to marry the girl to a good family so that she would have a good home. He was in a state of confusion on his death bed and told me to bury her.

To save my father from putting himself in an unjust position, I did not obey his last words said under a confused state, but did what he commanded when he was in a clear mind. I did so to help my father to accomplish his virtues.” General Wei Ke was honored by the king of Jin for capturing the Qin General Du Hui alive and was granted the territory of Linghu (now Linyi, Shanxi, China).