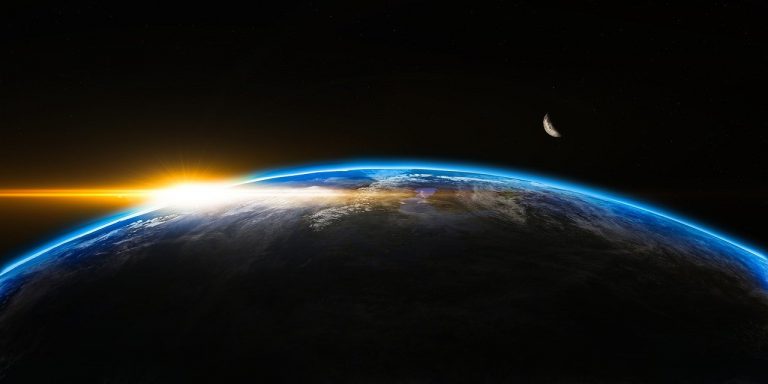 Study provides new perspective on Washington state’s Channeled Scablands, carved by the Missoula megafloods at the end of the last ice age. (Image: via Pixabay)

As ice sheets began melting at the end of the last ice age, a series of cataclysmic floods called the Missoula megafloods scoured the landscape of eastern Washington, carving long, deep channels and towering cliffs through an area now known as the Channeled Scablands. They were among the largest known floods in Earth’s history, and geologists struggling to reconstruct them have now identified a crucial factor governing their flows.

In a study published February 14 in Proceedings of the National Academy of Sciences, researchers showed how the changing weight of the ice sheets would have caused the entire landscape to tilt, changing the course of the megafloods. Lead author Tamara Pico, assistant professor of Earth and planetary sciences at UC Santa Cruz, said:

“People have been looking at high water marks and trying to reconstruct the size of these floods, but all of the estimates are based on looking at the present-day topography. This paper shows that the ice age topography would have been different over broad scales due to the deformation of Earth’s crust by the weight of the ice sheets.”

Megafloods governed tilting of the landscape

During the height of the last ice age, vast ice sheets covered much of North America. They began to melt about 20,000 years ago, and the Missoula megafloods occurred between 18,000 and 15,500 years ago. Pico’s team studied how the changing weight of the ice sheets during this period would have tilted the topography of eastern Washington, changing how much water would flow into different channels during the floods.

Glacial Lake Missoula formed in western Montana when a lobe of the Cordilleran ice sheet dammed the Clark Fork Valley in the Idaho panhandle and meltwater built up behind the dam. Eventually, the water got so deep that the ice dam began to float, resulting in a glacial outburst flood. After enough water had been released, the ice dam resettled and the lake refilled. This process is thought to have been repeated dozens of times over a period of several thousand years. Downstream from glacial Lake Missoula, the Columbia River was dammed by another ice lobe, forming glacial Lake Columbia.

When Lake Missoula’s outburst floods poured into Lake Columbia, the water spilled over to the south onto the eastern Washington plateau, eroding the landscape and creating the Channeled Scablands. During this period, the deformation of the Earth’s crust in response to the growing and shrinking of ice sheets would have changed the elevation of the topography by hundreds of meters, Pico said. Her team incorporated these changes into flood models to investigate how the tilting of the landscape would have changed the routing of the megafloods and their erosional power in different channels. Pico said:

“We used flood models to predict the velocity of the water and the erosional power in each channel, and compared that to what would be needed to erode basalt, the type of rock on that landscape.”

“As the landscape tilted, it affected both where the water overflowed out of Lake Columbia and how water flowed in the channels, but the most important effect was on the spillover into those two tracts. What’s intriguing is that the topography isn’t static, so we can’t just look at the topography of today to reconstruct the past.”

The findings provide a new perspective on this fascinating landscape, she said. Steep canyons hundreds of feet deep, dry falls, and giant potholes and ripple marks are among the many remarkable features etched into the landscape by the megafloods. Pico said:

“When you are there in person, it’s crazy to think about the scale of the floods needed to carve those canyons, which are now dry. There are also huge dry waterfalls — it’s a very striking landscape.”

She also noted that the oral histories of Native American tribes in this region include references to megafloods. “Scientists were not the first people to look at this,” Pico said. “People may even have been there to witness these floods.”

Provided by: University of California — Santa Cruz [Note: Materials may be edited for content and length.]