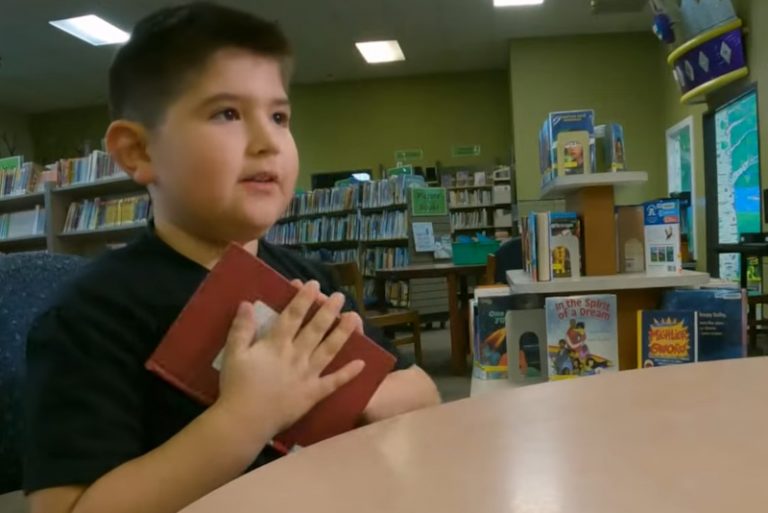 The book written by 8-year-old author Dillon Helbig has now been officially added to the collection of the Ada Community Library’s Lake Hazel branch. (Image: Screenshot via YouTube)

Would you read a child’s handwritten book? Sometimes, children who are not taken seriously by grown-ups end up achieving major feats, and those who ignored the youngsters are stunned. However, it is hard to imagine a child who can write a book that becomes a craze among readers. An 8-year-old kid hailing from Boise, Idaho, in the U.S. has written such a book and it is in huge demand now. The youngster wrote the book and put it in a library. He took 4 days to write the book. The handwritten book is now so popular that a lot of people are waiting to read it.

Dillon Helbig, the 8-year-old author, used an empty journal to hold his story. The book deals with an imaginary tale of time travel. He named the book The Adventures of Dillon Helbig’s Crismis. His grandmother took him to Ada Community Library’s Lake Hazel branch. He placed the handwritten book on a shelf hoping people would read it. His grandmother had no idea what he had done. When the news spread, his family members were quite amazed. He later told his mother about what he had done and they went to retrieve the handwritten book after a couple of days. However, they could not find it as the book had been taken by curious library visitors.

The library staff was curious, too, and so they read the entire book. The library branch manager, Alex Hartman, said: “So several of the library staff, including our picture book selector, read through the book and we really just determined that it fit all of our selection criteria to be included in our library collection.” He added: “Some of the illustrations are really quite imaginative and sophisticated in terms of perspective.” The book is part fantasy and part science fiction. Hartman said the story was captivating for the target readers and so were the illustrations made by Dillon. Hartman took the book to be reviewed by his son, a 6-year-old. The result was encouraging as he found his son was delighted.

The handwritten book has become a big hit with library visitors. The book has, in fact, inspired some other kids to write books, a development that has taken their parents by surprise. However, the biggest surprise is that the handwritten book won the Whodini Award for Best Young Novelist — a development that was shared by the library. The library is now thinking of printing the hand-written book and they are in talks with the family of the gifted child. The family is quite delighted and may just give their consent.

Hartman said everybody loves the book. He said that the boy deserves accolades for his creativity. More than 60 people are in line to read it. The library is now allowing people to check out the handwritten book for 1 month. The writing was praised by author and former Central Intelligence Agency officer Christopher Burgess. The incident was shared on social media by the library management. Soon after, praise started pouring in from all quarters. The library put the book in its graphic-novels segment soon after.

The nice thing is that the young author is delighted by the unexpected success of his first book. He is now working on a second book and it is named The Jacket-Eating Closet. He said that it will be a revised version featuring more characters. Hartman is happy that the kid made the unusual move. He said Dillon did not do it for making news or seeking publicity. He is a confident youngster and wanted to reach out to others through his writing. As for Dillon’s family, they are happy that his talent is getting recognition.