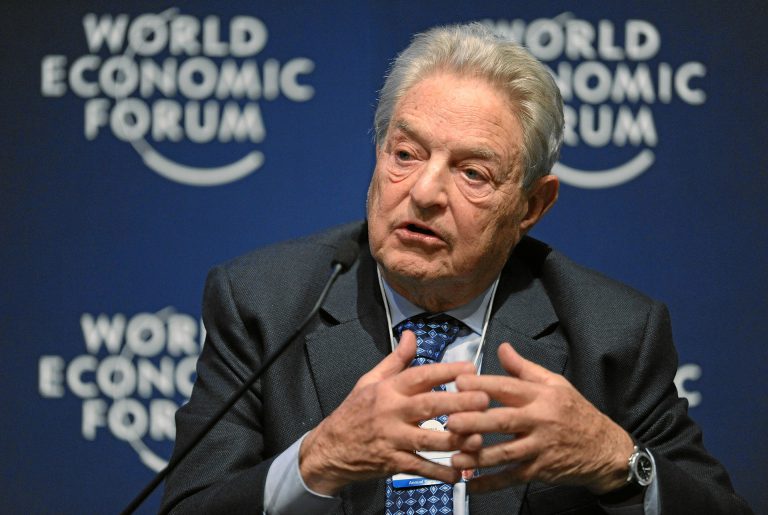 George Soros during a session on redesigning the international monetary system at the World Economic Forum Annual Meeting. (Image: via Wikipedia)

George Soros is the founder of the Open Society Foundation, which funds groups that promote democracy and human rights. The Hungarian-born American investor has been a frequent critic of Chinese President Xi Jinping.

The real estate market, which has underpinned China’s economic growth during  Xi Jinping’s tenure, faces turmoil that represents another risk. George Soros argued that the crisis has shaken confidence in China’s leadership and that falling property prices will “turn many of those who invested the bulk of their savings in real estate against” the country’s president.

China Evergrande Group, the world’s most indebted developer, is struggling to repay more than US$300 billion in liabilities, including nearly US$20 billion of international market bonds that were deemed to be in cross-default by rating firms earlier this year after it missed payments. The company recorded a 99 percent decline in sales year on year, the steepest decline among China’s foremost developers. Consequently, China Evergrande Group dialed back payment plans on billions of dollars of overdue wealth management products as its liquidity crisis showed little sign of easing.

“It remains to be seen how the authorities will handle [the real estate] crisis,” George Soros said. “Xi Jinping has many tools available to reestablish confidence — the question is whether he will use them properly. In my opinion, the second quarter of 2022 will show whether he has succeeded.”

“The current situation doesn’t look promising for Xi,” he added.

George Soros argued that the omicron COVID-19 variant “threatens to be Xi Jinping’s undoing” as the virus is “no longer under control” in China.

“The Chinese vaccines were designed to deal with the [original] Wuhan variant, but the world is now struggling with other variants,” Soros said. “Xi Jinping couldn’t possibly admit this while he is waiting to be appointed for a third term — he is hiding it from the Chinese people as a guilty secret.”

The Chinese Communist Party will decide at its National Party Congress this year whether to give Xi Jinping a third term in office. But Soros argued Xi Jinping’s attempts to impose “total control” over the country via a series of severe lockdowns could jeopardize his chances of being reinstated as the Party’s leader as the strategy is “unlikely to work against a variant as infectious as omicron.”

There is a fight brewing within the CCP

Despite Xi Jinping’s authority over the military and citizen surveillance, he has “many enemies,” George Soros added. “Although nobody can oppose him publicly because he controls all the levers of power, there is a fight brewing within the CCP that is so sharp that it has found expression in various Party publications,” he said.

“Xi is under attack from those who are inspired by Deng Xiaoping’s ideas and want to see a greater role for private enterprise.” He further said that replacing Xi with someone less repressive would “remove the greatest threat that open societies face today.”

The CCP in November passed a historical resolution — the likes of which only Mao Zedong and Deng Xiaoping had achieved — praising Xi Jinping’s achievements and attempting to elevate his stature in the Party’s history.

“He tried to impose total control, but he failed,” George Soros said. “Given the strong opposition within the CCP, Xi Jinping’s carefully choreographed elevation to the level of Mao Zedong and Deng Xiaoping may never occur.”