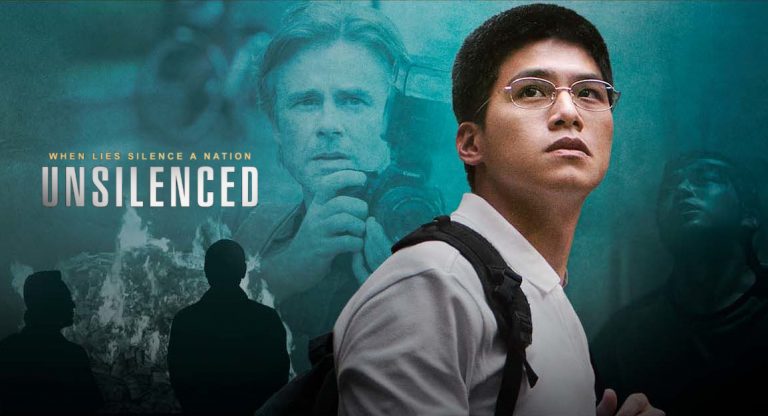 'Unsilenced' is based on the true story of the Chinese Communist Party's ongoing campaign to crush the peaceful spiritual practice of Falun Gong. (Image: via Flying Cloud Productions)

Based on true events, Unsilenced tells the story of a group of young college students who are unwittingly brought together with a jaded American reporter as they work together to expose the Chinese Communist Party’s brutal crackdown against 100 million of its own people. In the midst of lies, manipulation, and persecution, they face arrests, torture, and even death threats, but ultimately choose to follow their conscience and expose the lies to the world.

Directed by Chinese-Canadian filmmaker and Peabody Award-winner Leon Lee, Unsilenced recently made its theatrical debut on January 21 across 30 U.S. cities, including in select Cinemark Theaters, which is one of the largest movie theater chains in the United States. The film has been praised by both critics and audience members alike, and it was thanks to such high praise that the film was extended for a second week in theaters.

After seeing Unsilenced, many viewers commented on an Epoch Times article about the film, with one viewer saying: “I couldn’t speak for a long time after I saw it.” Another audience member said: “I just came out of the theater and it was so shocking… really felt the same as after watching ‘Schindler’s List.’” Audience members have been deeply moved by the power of Unsilenced, with some on social media commenting that the audience broke out in cheers at the end of the movie, or that they were moved to tears.

So just what is it about Unsilenced that’s making such a profound impact on viewers?

‘Unsilenced’ is the true story of graduate student Wang Weiyu

Unsilenced tells the story of Wang Weiyu, a talented and accomplished graduate student with a bright future. While pursuing his doctorate degree in engineering at Tsinghua University, China’s equivalent to America’s MIT, he finds himself caught up in a massive Communist Party propaganda campaign virtually overnight.

Wang Weiyu began his early days of study at Tsinghua University seeking not just knowledge, but the true meaning of life. At that time, the ancient spiritual practice of Falun Gong had spread from Changchun in northeastern China to Beijing, and ultimately throughout all of China, including Tsinghua University. Many people at the university joined the ranks of Falun Gong practitioners, from former presidents, professors, and doctoral supervisors, to undergraduate, master’s, and doctoral students.

After hearing many stories about its benefits, Wang Weiyu, along with his girlfriend and fellow student Xiao Qing, were among those who took up the practice of Falun Gong. Living by the practice’s core principles of Truthfulness, Compassion, and Forbearance, they witnessed the solemnity, excellence, and beauty of Falun Gong.

On May 1, 1999, Wang Weiyu and Xiao Qing married in their hometown of Shandong. Having recently completed her master’s degree, Xiao Qing was working at a famous company in Shanghai, while Wag Weiyu continued his doctoral studies. With the blessing of their friends and family both at home and abroad, they were full of hopes and dreams for their future.

But on July 20, 1999, communist dictator Jiang Zemin, concerned that too many people were practicing Falun Gong, used the full arsenal of state machinery to slander, defame, and persecute Falun Gong. The Chinese Communist Party’s (CCP’s) dictatorial apparatus unleashed all means at its disposal to persecute Falun Gong, as they began to arrest, detain, and torture practitioners. At one point, things were so bleak that the Chinese land was darkened, and all fell silent.

At this juncture in history, Falun Gong practitioners like Wang Weiyu were faced with a major life decision: choose to go along with the Chinese Communist Party and be allowed to pursue a comfortable life, or choose to follow their conscience and beliefs, and tell the truth about the persecution while exposing the lies, even at the risk of their own lives.

Wang Weiyu chose his conscience and beliefs. As a result, he spent eight and a half years illegally imprisoned, during some of the most precious years of his youth. The persecution of Wang Weiyu for exposing the lies and telling the truth about the persecution is a microcosm of what hundreds of millions of Falun Gong practitioners in China have experienced over the past twenty-three years.

Since July 20, 1999, Jiang Zemin and his gang of political hooligans have used the most vicious tactics in history to try to force Falun Gong practitioners, along with more than 1 billion Chinese people, to remain silent about the atrocities of the Chinese Communist Party. At the same time, Jiang and his gang have used economic interests as leverage to coerce entrepreneurs, dignitaries, media, academics, and international organizations around the world to remain silent.

But Falun Gong practitioners could not be silenced. Nearly 23 years ago, Wang Weiyu, along with other Tsinghua students, began to expose the lies of the CCP.

Although Jiang Zemin and his gang are still attempting to cover up the brutal persecution of Falun Gong, the truth has since been widely disseminated around the world. Because of Falun Gong practitioners, both in China and abroad, the “silence” has been broken countless times as they continue to raise the voice of justice.

An independently produced film, Unsilenced has debuted across the United States, despite the pandemic, in a setting where it’s widely believed that the virus was covered up by the CCP, allowing it to spread across the globe. And despite the lies and propaganda of the CCP about Falun Gong, practitioners around the world continue to speak the truth, day after day, month after month, year after year, breaking through the “silence” and making a “cry” that has had an enormous impact.