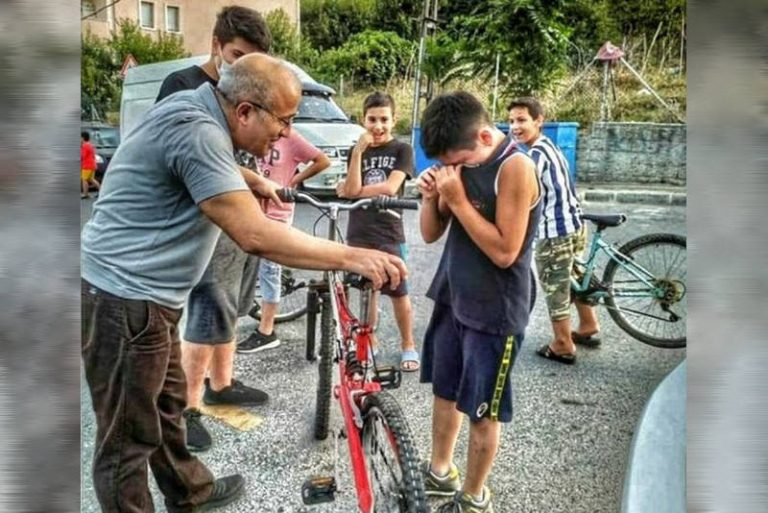 A boy riding a bike with faulty brakes in Turkey got a new one from a kind man who's car he hit. (Image: sarveshak via Reddit)

This is an inspiring story about how a young boy got a new bike. It is not uncommon to come across mishaps or experience untoward developments in life. From time to time, everyone experiences things that he or she did not expect or want. However, very few people can keep calm and act in a humanitarian way when such incidents occur. What would you do if you found your vehicle had been hit by a stranger? In such a situation, most people yell at the other person and things may even get nasty. However, in an unexpected development, one person in Turkey showed his human side and reacted in a loving and kind way.

While a young boy was riding his bike, he accidentally ran into a parked car. The incident is not rare as such. These things happen on an almost daily basis as kids often end up damaging stuff belonging to others without intention. The brakes on the boy’s bike didn’t work. He knew it, but he still wanted to ride along with his friends.

After hitting the parked vehicle, the boy was quite worried. He and his friends had thought the car owner would come down heavily on them. In fact, they might have thought they would be facing more than yelling. However, something different was waiting for them and that took them by surprise.

The car owner bought the boy a new bike

The owner of that car saw that his vehicle had been hit. However, he did not shout at the boys after getting all the details or use any kind of abusive language. Instead, he analyzed the situation from a humanitarian angle. He figured out that the boy did not hit his car on purpose and that if he had a functional bike with proper brakes, the accident would not have taken place at all. Besides, the damage caused to his car was minimal. He forgave the boy and, out of an act of kindness, bought a new bike for him. He presented the new bike to the boy personally — taking everyone by surprise.

Of course, this is something the boy did not expect at all. He was kind of overwhelmed by the response of the car owner. As he was given the new bike by the car owner, the boy could not control his tears. He was visibly crying, but not from sorrow. The woes of dealing with a damaged bike no longer bothered him now that he had a new bike.

As the incident and images were posted online, the reactions started pouring in soon after. The social media users had nothing but praise for the car owner and they said it is rare to find people with such understanding and kindness. They recalled similar incidents in their childhood as well. In such instances, people typically care little about the extent of damage caused to their property, and yelling is the first and default reaction.

Some of the social media users praised both the car owner and the boy who had hit his vehicle. They said the boy also has good emotional awareness or else he would not have cried at receiving the unexpected gift. This proves the goodness in human nature is still not extinct and that children can develop the right values when they are treated with compassion and understanding. If more people nurture such a mindset and only react after thinking, the world will be a much better place to live in.