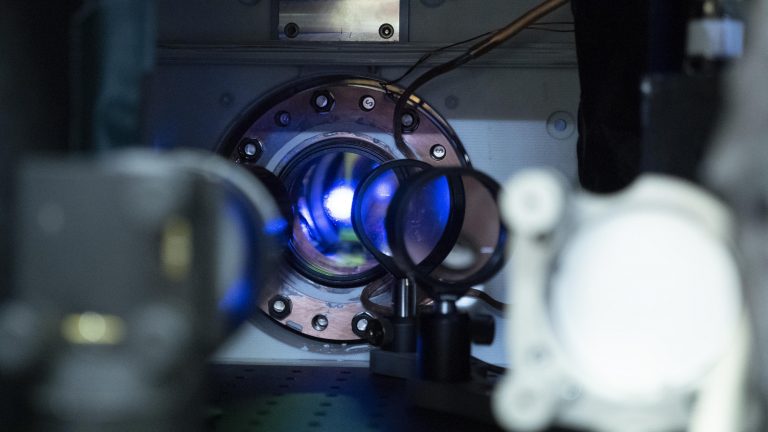 JILA (Joint Institute for Laboratory Astrophysics) physicists have measured Albert Einstein’s theory of general relativity, or more specifically, the effect called time dilation, at the smallest scale ever, showing that two tiny atomic clocks, separated by just a millimeter or the width of a sharp pencil tip, tick at different rates.

The experiments, described in the Feb. 17 issue of Nature, suggest how to make atomic clocks 50 times more precise than today’s best designs and offer a route to perhaps revealing how relativity and gravity interact with quantum mechanics, a major quandary in physics. JILA is jointly operated by the National Institute of Standards and Technology (NIST) and the University of Colorado Boulder, NIST/JILA Fellow Jun Ye said:

“The most important and exciting result is that we can potentially connect quantum physics with gravity, for example, probing complex physics when particles are distributed at different locations in the curved space-time. For timekeeping, it also shows that there is no roadblock to making clocks 50 times more precise than today — which is fantastic news.”

Einstein’s 1915 theory of general relativity explains large-scale effects such as the gravitational effect on time and has important practical applications such as correcting GPS satellite measurements. Although the theory of general relativity is more than a century old, physicists remain fascinated by it. NIST scientists have used atomic clocks as sensors to measure relativity more and more precisely, which may help finally explain how its effects interact with quantum mechanics, the rulebook for the subatomic world. According to the theory of general relativity, atomic clocks at different elevations in a gravitational field tick at different rates. The frequency of the atoms’ radiation is reduced — shifted toward the red end of the electromagnetic spectrum — when observed in stronger gravity, closer to Earth.

That is, a clock ticks more slowly at lower elevations. This effect has been demonstrated repeatedly; for example, NIST physicists measured it in 2010 by comparing two independent atomic clocks, one positioned 33 centimeters (about 1 foot) above the other. The JILA researchers have now measured frequency shifts between the top and bottom of a single sample of about 100,000 ultracold strontium atoms loaded into an optical lattice, a lab setup similar to the group’s earlier atomic clocks. In this new case the lattice, which can be visualized as a stack of pancakes created by laser beams, has unusually large, flat, thin cakes, and they are formed by less intense light than normally used.

This design reduces the distortions in the lattice ordinarily caused by the scattering of light and atoms, homogenizes the sample, and extends the atoms’ matter waves, whose shapes indicate the probability of finding the atoms in certain locations. The atoms’ energy states are so well controlled that they all ticked between two energy levels in exact unison for 37 seconds, a record for what is called quantum coherence. Crucial to the new results were the Ye group’s imaging innovation, which provided a microscopic map of frequency distributions across the sample, and their method of comparing two regions of an atom cloud rather than the traditional approach of using two separate clocks.

The measured redshift across the atom cloud was tiny, in the realm of 0.0000000000000000001, consistent with predictions. (While much too small for humans to perceive directly, the differences add up to major effects on the universe as well as technology such as GPS.) The research team resolved this difference quickly for this type of experiment, in about 30 minutes of averaging data. After 90 hours of data, their measurement precision was 50 times better than in any previous clock comparison. Ye said:

“This a completely new ballgame, a new regime where quantum mechanics in curved space-time can be explored. If we could measure the redshift 10 times even better than this, we will be able to see the atoms’ whole matter waves across the curvature of space-time. Being able to measure the time difference on such a minute scale could enable us to discover, for example, that gravity disrupts quantum coherence, which could be at the bottom of why our macroscale world is classical.”

Better clocks have many possible applications beyond timekeeping and navigation. Ye suggests atomic clocks can serve as both microscopes to see minuscule links between quantum mechanics and gravity and as telescopes to observe the deepest corners of the universe. He is using clocks to look for mysterious dark matter, believed to constitute most matter in the universe. Atomic clocks are also poised to improve models and understanding of the shape of the Earth through the application of a measurement science called relativistic geodesy.

Provided by National Institute of Standards and Technology [Note: Materials may be edited for content and length.]