Plasmas for Nuclear Fusion Controlled by EPFL and DeepMind AI 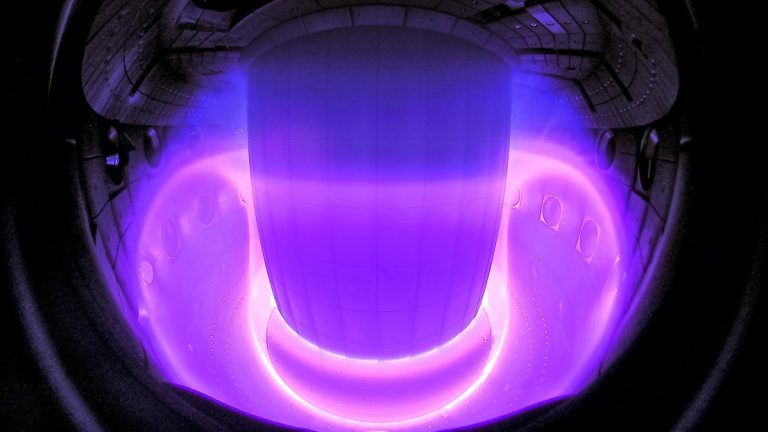 Scientists at EPFL’s Swiss Plasma Center and DeepMind have jointly developed a new method for controlling plasma configurations for use in nuclear fusion research. (Image: DeepMind & SPC via EPFL)

EPFL’s Swiss Plasma Center (SPC) has decades of experience in plasma physics and plasma control methods for nuclear fusion. DeepMind is a scientific discovery company acquired by Google in 2014 that’s committed to “solving intelligence to advance science and humanity.” Together, they have developed a new magnetic control method for plasmas based on deep reinforcement learning, and applied it to real-world plasmas for the first time in the SPC’s tokamak research facility, TCV. Their study has just been published in Nature.

Tokamaks are donut-shaped devices for conducting research on nuclear fusion, and the SPC is one of the few research centers in the world that has one in operation. These devices use a powerful magnetic field to confine plasma at extremely high temperatures — hundreds of millions of degrees Celsius, even hotter than the sun’s core — so that nuclear fusion can occur between hydrogen atoms. The energy released from fusion is being studied for use in generating electricity. What makes the SPC’s tokamak unique is that it allows for a variety of plasma configurations, hence its name: variable-configuration tokamak (TCV). That means scientists can use it to investigate new approaches for confining and controlling plasmas. The configuration of plasmas relates to their shape and position in the device.

Controlling plasmas as hot as the Sun for nuclear fusion

Tokamaks form and maintain plasmas through a series of magnetic coils whose settings, especially voltage, must be controlled carefully. Otherwise, the plasmas could collide with the vessel walls and deteriorate. To prevent this from happening, researchers at the SPC first test their control systems configurations on a simulator before using them in the TCV tokamak. Federico Felici, an SPC scientist and co-author of the study, said:

“Our simulator is based on more than 20 years of research and is updated continuously. But even so, lengthy calculations are still needed to determine the right value for each variable in the control system. That’s where our joint research project with DeepMind comes in.”

After being trained, the AI-based system was able to create and maintain a wide range of plasma shapes and advanced configurations, including one where two separate plasmas are maintained simultaneously in the vessel. Finally, the research team tested their new system directly on the tokamak to see how it would perform under real-world conditions. The SPC’s collaboration with DeepMind dates back to 2018 when Felici first met DeepMind scientists at a hackathon at the company’s London headquarters. There he explained his research group’s tokamak magnetic-control problem. Felici and Martin Riedmiller, control team lead at DeepMind and co-author of the study, adds:

“DeepMind was immediately interested in the prospect of testing their AI technology in a field such as nuclear fusion, and especially on a real-world system like a tokamak, our team’s mission is to research a new generation of AI systems — closed-loop controllers — that can learn in complex dynamic environments completely from scratch. Controlling a fusion plasma in the real world offers fantastic, albeit extremely challenging and complex, opportunities.”

After speaking with Felici, DeepMind offered to work with the SPC to develop an AI-based control system for its tokamak. Ambrogio Fasoli, the director of the SPC and a co-author of the study, said:

“We agreed to the idea right away, because we saw the huge potential for innovation. All the DeepMind scientists we worked with were highly enthusiastic and knew a lot about implementing AI in control systems.”

For his part, Felici was impressed with the amazing things DeepMind can do in a short time when it focuses its efforts on a given project. DeepMind also got a lot out of the joint research project, illustrating the benefits to both parties of taking a multidisciplinary approach. Brendan Tracey, a senior research engineer at DeepMind and co-author of the study, says:

“The collaboration with the SPC pushes us to improve our reinforcement learning algorithms, and as a result can accelerate research on fusing plasmas.”

This project should pave the way for EPFL to seek out other joint R&D opportunities with outside organizations. “We’re always open to innovative win-win collaborations where we can share ideas and explore new perspectives, thereby speeding the pace of technological development,” says Fasoli.

Provided by Ecole Polytechnique Federale de Lausanne [Note: Materials may be edited for content and length.]