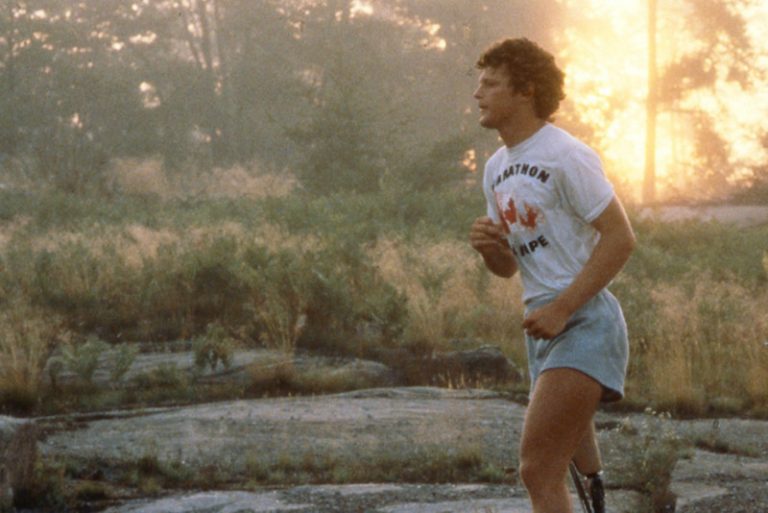 On November 12, 1976, a young man named Terry Fox from British Columbia was involved in a car accident and survived. A few months later, he felt some soreness in his right knee, but chose to ignore it. The pain got worse as more months passed. He went to the hospital but was shocked by what the doctors found. He was diagnosed with osteogenic sarcoma — a type of cancer that starts in the bone and spreads through the body.

He was only 18 years old at that time. What could be worse than having cancer at such a young age? It was being told that you had only a few years left to live, and that to even survive that long, you’d have to lose your leg and go through painful treatments.

Four months after the diagnosis, his right leg was amputated 6 inches above the knee and he had to endure 16 months of chemotherapy. During his treatments, he met fellow cancer patients who were fighting for their lives, just like he was.

Terry Fox’s cancer changed his life forever. Losing a leg, enduring painful treatments, and seeing his fellow cancer-patient friends die had a great impact on his life. He realized that the suffering and pain caused by cancer were bigger than just his own personal battle against it. For that reason, he wanted to unite the nation against this terrible disease.

Determined to raise funds and spread awareness for cancer, he decided that he would attempt an impossible feat: to run across Canada on just one leg. Despite his increasing bodily limitations, the young Canadian courageously said: “Anything is possible if you try.”

He started his journey, now known as the Marathon of Hope, on April 12, 1980. His run began when he dipped his artificial leg in the Atlantic Ocean. He filled a bottle with ocean water and intended to pour the contents into the Pacific Ocean when he completed his journey. He said that it was his symbolic way of uniting the country for one cause, that is, to find a cure for cancer.

He ran a marathon every day with one good leg and one artificial leg made of steel and fiberglass. At times, the pain and pressure on his hip were unbearable, but Terry Fox kept going. He persisted no matter the discomfort, obstacles, or changes in weather. Miles of lonely highways stretched before him, but he didn’t look back, he kept looking ahead.

News of Terry Fox’s run spread in Canada, and soon the lonely highway was filled with people cheering him on. People lined the streets hoping to see him, to run with him, or just to touch his hand. Canadians saw his determination and felt inspired by his efforts.

A legacy that changed Canada and the world forever

“I want to set an example that will never be forgotten,” the bold and determined Canadian said. During this time, he had already achieved his goal of receiving one Canadian dollar from every person in the country. He had started the framework of what is now known as “The Terry Fox Run” that funds cancer research in Canada and has raised more than US$650 million to date, bringing hope to people who are dying from cancer.

Finally, after 143 days and 3,339 miles, he was forced to stop running because of his fast deteriorating health condition. His cancer had started spreading to his lungs and all over his body.

On June 28, 1981, the one-legged runner died at the age of 22. The entire nation was saddened and mourned his death, but he left a legacy that will always be remembered.

A life lived purposefully is a life well-lived

Terry Fox, despite his disability, conquered his limitations and spent his remaining years creating a positive impact. His epitaph reads: “He made his too-short life into a marathon of hope and courage.”

How did he do it? Quite simply, he found purpose in his pain and lived the remainder of his life according to that purpose.

Terry Fox did not wallow in his own suffering, but instead, turned his pain into power. He knew that a lot of people die from cancer. So he treated his own pain as a privilege, believing that since he was still alive, he could still do something — and he was right!

He found the silver lining when he chose to look at things beyond himself. He did not dwell on his own affliction. Instead, he chose to fight it and brought together a whole nation knowing that others are losing in this battle day by day.

Truly, it takes courage to be who you are, and Terry Fox chose to be the courageous, hopeful, and spirited one-legged runner who continues to inspire us today, long after he’s gone.