New Insights Into the Formation of Brown Dwarfs 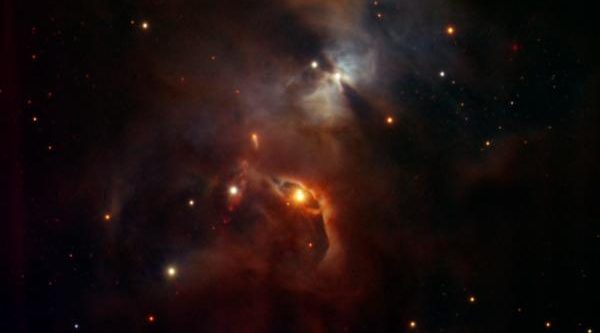 Nebula in serpens. In this region of the sky, the LMU team discovered deuterated methane in a proto-brown dwarf. (Image: via ESO)

Brown dwarfs are strange celestial bodies, occupying a kind of intermediate position between stars and planets. Astrophysicists sometimes call them “failed stars” because they have insufficient mass to burn hydrogen in their cores and shine like stars. It is continually debated if the formation of brown dwarfs is simply a scaled-down version of the formation of Sun-like stars. Astrophysicists are focusing on the youngest brown dwarfs, also called proto-brown dwarfs. They are only a few thousand years old and are still in the early formation stages. They want to know if the gas and dust in these resembles the composition of the youngest Sun-like proto-stars.

The focus of interest is methane, a simple and very stable gas molecule that, once formed, can only be destroyed by high-energy physical processes. It has been found in several extrasolar planets. In the past, methane has played a fundamental role to identify and study the properties of the oldest brown dwarfs in our Galaxy, which are several hundred million to billions of years old. Now, for the first time, a team led by LMU astrophysicist Basmah Riaz, has unambiguously detected deuterated methane (CH3D) in three proto-brown dwarfs. It is the first clear detection of CH3D outside the solar system. This is an unexpected result.

Proto-brown dwarfs are very cold and dense objects. This makes them difficult to study methane signatures in the near-infrared. In contrast, they can be readily observed in the millimeter wave range. Contrary to methane, which has no spectral signature in the radio domain because of its symmetry, deuterated methane (CH3D) can be observed at millimeter wavelengths.

The first detection of CH3D was all the more astonishing because, according to the theories on brown dwarf formation, proto-brown dwarfs are cooler (about 10 Kelvin or less) and denser than proto-stars. Based on chemical theory, CH3D is preferentially formed when the gas is warm, i.e., at temperatures around 20 to 30 Kelvin. Basmah Riaz said:

“The measurements imply that at least a significant fraction of the gas in a proto-brown dwarf is warmer than 10 Kelvin, otherwise CH3D should not be there at all.”

The CH3D abundance measurement provides scientists with a methane abundance estimate. It is also unexpected that while there is only one Sun-like proto-star known to date where CH3D has been tentatively detected, the LMU Team has firmly detected CH3D in 3 proto-brown dwarfs. This means that they exhibit a rich warm organic chemistry, and these cool compact astrophysical objects may not be simply a scaled-down replica of proto-stars. Co-author of the study, Wing-Fai Thi of the Max Planck Institute for Extraterrestrial Physics, said:

“The methane in the proto-brown dwarfs may or may not survive or retain such high abundance in the oldest brown dwarfs.”

Since a warm environment is favorable for forming more complex molecules, proto-brown dwarfs are intriguing objects to search for these molecules in the future.

Provided by Ludwig Maximilian University of Munich [Note: Materials may be edited for content and length.]