Can a Planet Have a Mind of Its Own? 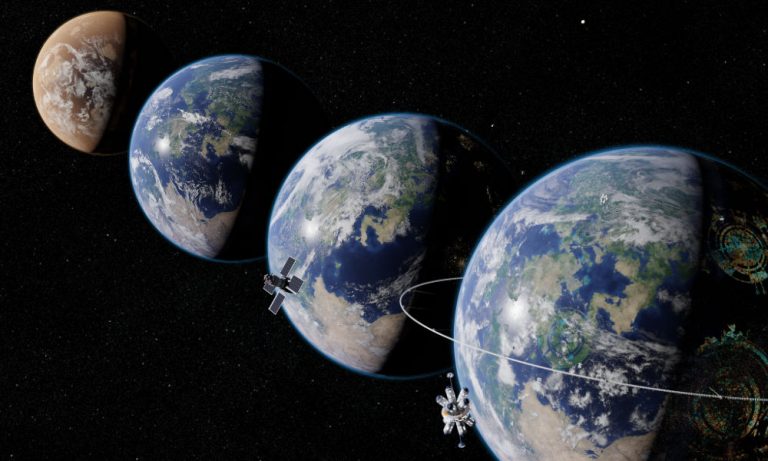 In a self-described 'thought experiment,' University of Rochester astrophysicist Adam Frank and colleagues David Grinspoon at the Planetary Science Institute and Sara Walker at Arizona State University use scientific theory and broader questions about how life alters a planet, to posit four stages to describe Earth's past and possible future. (Image: Michael Osadciw via University of Rochester)

Rochester astrophysicist Adam Frank discusses why cognitive activity operating on a planetary scale is necessary to tackle global issues such as climate change. The collective activity of life — all of the microbes, plants, and animals — have changed planet Earth. Take, for example, plants. Plants “invented” a way of undergoing photosynthesis to enhance their own survival, but in so doing, they released oxygen that changed the entire function of our planet. This is just one example of individual lifeforms performing their own tasks, but collectively having an impact on a planetary scale.

If the collective activity of life — known as the biosphere — can change the world, could the collective activity of cognition, and actions based on this cognition, also change a planet? Once the biosphere evolved, Earth took on a life of its own. If a planet with life has a life of its own, can it also have a mind of its own? These are questions posed by Adam Frank, the Helen F. and Fred H. Gowen Professor of Physics and Astronomy at the University of Rochester, and his colleagues David Grinspoon at the Planetary Science Institute and Sara Walker at Arizona State University, in a paper published in the International Journal of Astrobiology.

Their self-described “thought experiment” combines current scientific understanding about the Earth with broader questions about how life alters a planet. In the paper, the researchers discuss what they call “planetary intelligence” — the idea of cognitive activity operating on a planetary scale — to raise new ideas about the ways in which humans might tackle global issues such as climate change. As Frank says:

“If we ever hope to survive as a species, we must use our intelligence for the greater good of the planet.”

Frank, Grinspoon, and Walker draw from ideas such as the Gaia hypothesis — which proposes that the biosphere interacts strongly with the non-living geological systems of air, water, and land to maintain Earth’s habitable state — to explain that even a non-technologically capable species can display planetary Intelligence. The key is that the collective activity of life creates a system that is self-maintaining. For example, Frank says, many recent studies have shown how the roots of the trees in a forest connect via underground networks of fungi known as mycorrhizal networks. If one part of the forest needs nutrients, the other parts send the stressed portions the nutrients they need to survive, via the mycorrhizal network. In this way, the forest maintains its own viability.

Right now, our civilization is what the researchers call an “immature technosphere,” a conglomeration of human-generated systems and technology that directly affects the Earth, but it is not self-maintaining. For instance, the majority of our energy usage involves consuming fossil fuels that degrade Earth’s oceans and atmosphere. The technology and energy we consume to survive are destroying our home planet, which will, in turn, destroy our species. To survive as a species, then, we need to collectively work in the best interest of the planet. But, Frank said:

“We don’t yet have the ability to communally respond in the best interests of the planet. There is intelligence on Earth, but there isn’t planetary intelligence.”

Toward a mature technosphere

The complex system of planetary intelligence

Although we don’t yet know specifically how planetary intelligence might manifest itself, the researchers note that a mature technosphere involves integrating technological systems with Earth through a network of feedback loops that make up a complex system. Put simply, a complex system is anything built from smaller parts that interact in such a fashion that the overall behavior of the system is entirely dependent on the interaction. That is, the sum is more than the whole of its parts. Examples of complex systems include forests, the Internet, financial markets, and the human brain.

By its very nature, a complex system has entirely new properties that emerge when individual pieces are interacting. It is difficult to discern the personality of a human being, for instance, solely by examining the neurons in her brain. That means it is difficult to predict exactly what properties might emerge when individuals form a planetary intelligence. However, a complex system like planetary intelligence will, according to the researchers, have two defining characteristics: it will have emergent behavior and will need to be self-maintaining. Frank said:

“The biosphere figured out how to host life by itself billions of years ago by creating systems for moving around nitrogen and transporting carbon. Now we have to figure out how to have the same kind of self-maintaining characteristics with the technosphere.”

The search for extraterrestrial life

Despite some efforts, including global bans on certain chemicals that harm the environment and a move toward using more solar energy. Frank said:

“We don’t have planetary intelligence or a mature technosphere yet. But the whole purpose of this research is to point out where we should be headed.”

Raising these questions, Frank says, will not only provide information about the past, present, and future survival of life on Earth but will also help in the search for life and civilizations outside our solar system. Frank, for instance, is the principal investigator on a NASA grant to search for technosignatures of civilizations on planets orbiting distant stars. He said:

“We’re saying the only technological civilizations we may ever see — the ones we should expect to see — are the ones that didn’t kill themselves, meaning they must have reached the stage of a true planetary intelligence. That’s the power of this line of inquiry: it unites what we need to know to survive the climate crisis with what might happen on any planet where life and intelligence evolve.”

Provided by University of Rochester [Note: Materials may be edited for content and length.]