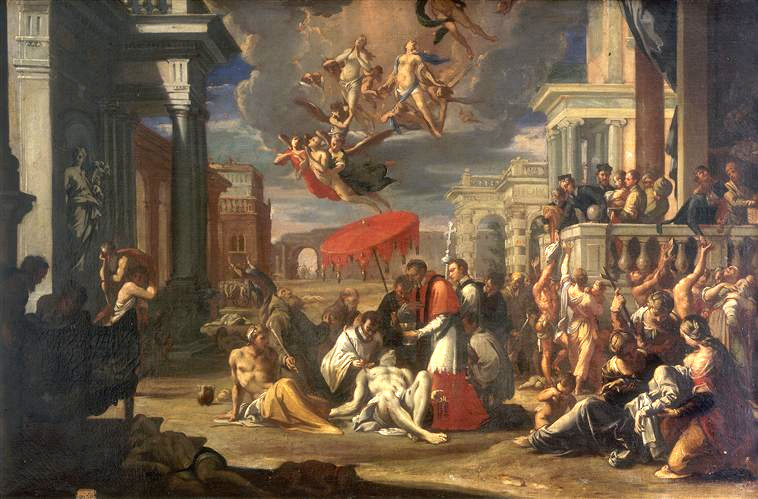 When Europe experienced the Bubonic Plague, those who were virtuous and dedicated enough to care for the sick received protection. (Image: via Public Domain)

Over the course of history, humans have experienced many epidemics and plagues, such as the Plague of Athens in 430 B.C., the Black Death in the 14th century, and the Spanish Flu during World War I. Though they have brought great disaster to society, there have also been many recorded miracles during history’s epidemics.

A unifying feature of any epidemic is that it comes about suddenly and then disappears mysteriously. People don’t know when it will come, nor when it will end.

Although a plague is untraceable, we may find solutions to it in the secrets it reveals to us.

Miracles in Europe: Safe from the Black Death

In both eastern and western cultures throughout history, there have been documented accounts of expelling fear of the plague through firm belief. For example, the Black Death hung heavy over Europe from the 14th to the 17th century, and people had nowhere to escape. But Martin Luther chose to stay in areas affected by the epidemic to serve the infected and dying.

Luther also witnessed firsthand that those who were virtuous and dedicated enough to care for the sick received protection. Though they may have gotten infected as well, they survived. Luther believed that the plague was God’s whip, acting not only as a punishment, but as a trial.

Revering the divine and upgrading morality was the hope for humankind when civilizations experienced tribulations. Conforming to Heaven’s principles and fundamental cosmic characteristics is key for humankind to survive from catastrophe.

Harmony between Heaven and humans is a constant theme throughout traditional Chinese culture. For example, the ancient Chinese medical classic the Yellow Emperor’s Classic of Internal Medicine stresses: “Corresponding to heaven and earth, and complying with the four seasons.”

Both the Taoist sage Lao Tzu and Chinese philosopher Confucius talked about the relationship between man and Heaven. According to Taoism, Heaven is nature, and man is a part of nature. Through direct observation, the people of ancient China understood that humans must act and live in agreement with Heavenly virtues. When they do so, humans will have good health, family harmony, and a peaceful society. When they cease to follow these virtues, individuals, families, and societies will suffer from disasters and diseases.

In eastern cultures, people believe that it is the invasion of evil chi, or energy, that causes plagues. For example, He Xiu, a well-known scholar in the Eastern Han Dynasty, said: “People’s diseases and epidemics are born of evil qi.”

Miracles in China: Epidemics did not touch the virtuous

History books have recorded many miracles of people brushing past plagues. According to the Imperial Collection of Four, in the Ming Dynasty, during the reign of Emperor Jiajing, there lived a former magistrate of Guangdong named Xu, whose family was on the verge of dying from the epidemic of dysentery. Xu was the sole person to stay and care for his sick grandmother and stepmother, saving them from danger. Xu remained healthy the entire time, as if the epidemic had nothing to do with him. In fact, it was his virtuous actions that kept him safe from the epidemic.

During the Yongle period of the Ming Dynasty, the entire family of Zhang Yanchen, father of Zhang Zonglian, who was well-known for successfully passing the highest imperial examinations, was infected by an epidemic. Yet, thanks to Zhang Yanchen’s righteous thoughts and actions, all his family escaped the fate of death.

Zhang Yanchen prepared congee and visited his sick family members several times a day, every day. Everyone tried to persuade him to stay away from them so that he did not come down with the disease, but he explained: “I do good deeds. How can evil spirits harm me? The roadside trees also offer shade to passers-by. How can people not help those in danger?” Though Zhang shuttled back and forth between many infected people, he never became infected himself.

There’s always a way out

Many prophecies, from ancient to modern, from Eastern to Western, have said that humanity will experience a great catastrophe at the end of the current cosmic cycle. For example, Nostradamus, the French prophet of the 16th century, predicted in Les Prophéties that a great calamity would befall humanity in 2021, causing the population to plummet. Liu Bowen, one of the founding heroes of the Ming Dynasty, also accurately predicted in his Shaanxi Mount Taibai Inscription that a pandemic would emerge from 2019 to 2020.

During the coronavirus pandemic in 2020, many people in China were infected. However, when some of them faithfully recited the nine-character mantra: “Falun Dafa is good, Truthfulness-Compassion-Forbearance is good,” they soon recovered from the virus. Medical experts also found: “When people sincerely chant the nine characters, the energy field of the human body will undergo significant changes, enhancing immunity, and protecting them from infection.”

Two years have passed, and the coronavirus variants have again ravaged the world. However, the anti-pandemic measures undertaken have repeatedly been proven to be wrong approaches. Shouldn’t we carefully think things over? Virtue or evil are both at our disposal, and we each make our own choices.

My wish is for you and your family to avoid disaster, be rescued from this calamity, and usher in a bright new era!