Dancer Explains the Chinese Idiom ‘Seamless as a Heavenly Garment’ 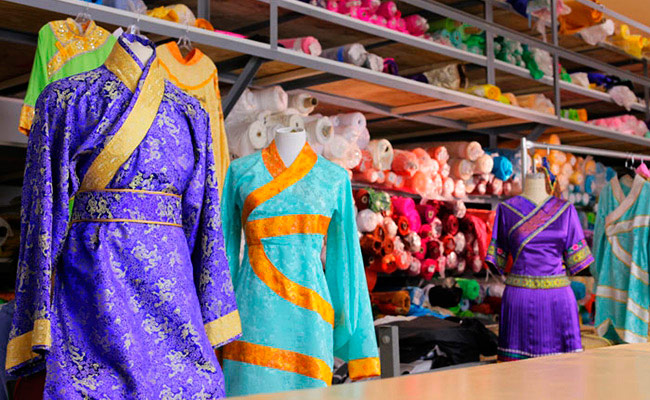 Betty Wang who is a dancer for Shen Yun performing arts, shares her thoughts on heavenly garments. (Image: via Shen Yun Performing Arts)

I’ve never had quite so many costumes for a performance as I do this year. 15! Imagine that: 15 dresses and gowns paired with accessories of every style — all in two hours. This is why Shen Yun is said to be “seamless as a heavenly garment.”

After so many seasons, I’m still in awe of the beautiful things that our costume department makes. Every fabric, sequin, sash, buckle, and lace is put together with meticulous care. Every pattern is designed with more detail than even first-row audience members could ever see… Unless the hardcore first-rower is using binoculars, which is a common sight in Shen Yun-crazed Taiwan.

As much as I want to dally around enjoying myself, there is no time. During the show, we’re practically in a relay race —  jumping into costumes, sprinting on stage, dancing, sprinting back to the quick-change room, and dashing out seconds later — a completely different character.

For the opening act alone, we time-travel eons from prehistory to the Han Dynasty (206 B.C.E-220 C.E.). Transformation time allotted? A little over a minute. Then, before I get comfortable in that turquoise court lady gown, the curtain is back down! In a heartbeat, we shoot forward to the Tang Dynasty (618-907 C.E.) with robes of rich orange and green. And the show has only been underway for five minutes.

This year, the dances and costumes transport us from frosty, highland Tibet to the Mongolian grasslands. We pop into resplendent palaces galore — Han, Tang, Qing, plus moon palaces and deep-sea dragon palaces, too.

Along the trip, every costume ensures that we’re dressed era- and character-appropriate from hairdos to shoes being truly “seamless as a Heavenly garment.”. It’s imperative to stay in fashion when time-hopping, even if we only stay for a twinkling.

On the other hand, I do feel guilty not being able to give each outfit the doting it deserves. So as a tribute to all our exquisite costumes and awesome costume department staff, I would like to share a legend-inspired idiom.

Once upon a balmy summer’s night, a young man named Guo Han was napping in his yard. Suddenly, a cool breeze blew in a most fragrant waft. Delightful, he thought, and slowly opened his eyes.

Just then, a lone fairy came floating down from the sky. Staggered, yet intrigued, he approached the goddess to ask who she was.

“I am the weaver girl from Heaven,” she replied. “Just dropping by for a jaunt.”

As she came closer, he got a better look at the maiden’s exquisite garb. Head to toe she was dressed so delicately, most perfectly, and literally seamlessly! “How is this possible?” the transfixed lad unwittingly thought aloud.

“But of course,” the fairy replied laughing. “In Heaven, our clothes aren’t hemmed with mortal needles and thread!”

Then, as gracefully as she appeared, the celestial maiden soared off. And the gawking youth was once again alone, save the chirping of the cricket-filled groves.

And from this story comes the idiom “seamless as a Heavenly garment,” tiān yī wú fèng (天衣無縫). It is used to describe something flawless that is done with immaculate skill.

When a musician’s every note is perfect, when a dancer’s every move surpasses your expectations, that’s being “seamless as a Heavenly garment.”

Then again, melting away in the middle of an Aussie heatwave, I think the barista making me a big, beautiful matcha slushy also deserves this praise for her artwork! (Guess where our company is right now? It’s summer and hitting 107°F this week.)