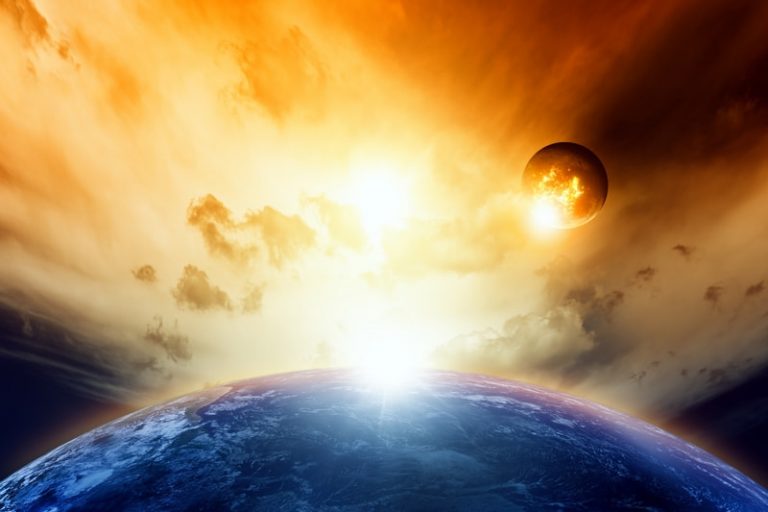 The Earth has gone through many massive disasters that constitute 'life-changing' events on a planetary scale. (Image: Ig0rzh via Dreamstime)

4 catastrophes that have happened to Earth

Scientists think the Moon formed shortly after Earth around 4.5 billion years ago. A new analysis of lunar rocks supports the hypothesis that the Moon was created by a colossal collision between young Earth and the planet called Theia, which was the size of Mars.

As Theia slammed into Earth, it would have caused rocks and magma to enter into space. It is this debris that scientists believe went on to form the Moon. This hypothesis also explains why Earth and the Moon have so many similarities.

The first half of Earth’s life was devoid of oxygen, however, it was not lifeless. Earth during this time would have looked more like a hostile alien planet, with methane spewing into the atmosphere by constant volcanic activity, and fatal UV radiation bombarding the surface.

Most scientists think that the amount of atmospheric oxygen was inconsequential right up until around 2.4 billion years ago when the Great Oxidation Event (GOE) occurred.

Then there was a sudden jump in oxygen levels, which was due to cyanobacteria (photosynthesizing microbes). This innocent single-celled organism spelled doom for most life on the planet, as photosynthesis produced free oxygen molecules as a byproduct.

There was so much oxygen it broke down the methane in the atmosphere and rusted the iron from our oceans, which turned the ocean and sky blue. Before oxygen, the sky would have looked orange and the ocean blood-red.

It turns out the Oxidation Event most likely triggered the Snowball Earth event. The oxygen reacted with atmospheric methane (a greenhouse gas), which greatly reduced its concentration and therefore triggered the Huronian glaciation, which is possibly the longest Snowball Earth episode in Earth’s history.

One of the world’s worst catastrophes, the Permian mass extinction, occurred around 252 million years ago, with 75 percent of all land species and 90 percent of those in the oceans just disappearing.

While scientists still don’t agree on what caused the event, one stands out from the rest. It has been long suspected that enormous releases of magma from the Siberian Traps played a key role in triggering the event.

Burgess and Samuel Bowring of MIT used uranium-lead dating to provide a timeline of eruptions. They were able to calculate that magmatism began about 300,000 years before the mass extinction, and continued for some 500,000 years after.

“We show that magmatism is a plausible trigger” for the Great Dying, Burgess told Smithsonian. A big question, though, is why the die-off didn’t start until hundreds of thousands of years after the eruptions began. It could be that the planet reached a tipping point only after a critical volume of magma had erupted, Burgess says. Or only small amounts of magma erupted until right before the mass extinction began.

What caused the terrestrial creatures to go extinct, though, is more of an enigma. “There are quite a few theories,” Burgess notes, such as hot atmospheric temperatures, huge fires, and rain as acidic as lemon juice; either way, it took millions of years for life to recover.