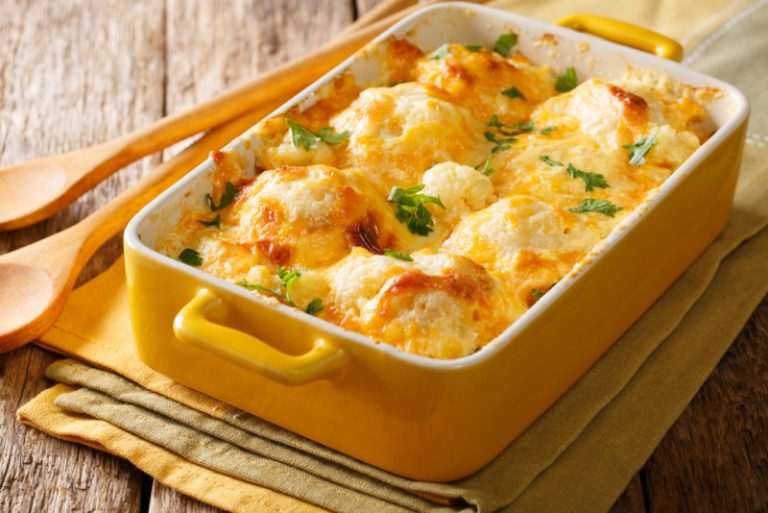 Cauliflower has so many wonderful health benefits that it has earned the title of 'super-food'. (Image: Roman Sergii Koval via Dreamstime)

Cauliflower is one of my grandma’s favorite vegetables. Though, personally, I’m not a big fan of this creamy white “flower,” I have to admit it does have wonderful health benefits. Because of this, cauliflower is also called a “super-food.”

You ingest sulforaphane when eating cauliflower. As “one of the most potent anti-cancer and liver detoxification compounds”, according to Brian D. Lawenda, M.D., sulforaphane has cytotoxic effects on cancer cells and can inhibit cancer cell growth. Many studies have found sulforaphane is able to prevent various types of cancer, especially breast, prostate, lung, stomach, colon, and rectal cancer.

In fact, sulforaphane can’t be found in cauliflower. It forms when you chew it, which allows the two compounds, glucoraphanin (precursor to sulforaphane) and myrosinase, to mix and react.

Studies suggest that steaming for up to five minutes is the best way to preserve myrosinase, while boiling and microwaving for one minute destroy most of it. But for those who prefer cauliflower cooked longer, you can eat it with myrosinase-containing raw foods to form sulforaphane. Such foods include radishes, arugula, brussels sprouts, etc.

Inflammation can be caused by infections of bacteria, viruses, and fungi, stress, food allergies or food sensitivities, environmental toxicity, diet, and even lifestyle. Chronic inflammation can increase the risk of getting cancer and cardiovascular diseases. Cauliflower, packed with anti-inflammatory nutrients, has been found to reduce inflammation levels in the body.

It is a generous source of Vitamin K, and also contains glucobrassicin, both of which possess excellent anti-inflammatory properties. Vitamin K is an essential component for Vitamin-K-dependent proteins, which directly regulate inflammatory responses. The breakdown of glucobrassicin when eating cauliflower generates indole-3-carbinol (I3C), a compound functioning at the genetic level, thus inhibiting inflammation at an early stage.

Other compounds found in this vegetable , such as sulforaphane converted from glucoraphanin, and omega-3 present in the form of alpha-linolenic acids, also have anti-inflammatory effects.

3. Protects your heart and blood vessels

The role of inflammation has been found increasingly important in understanding cardiovascular diseases. Some anti-inflammatory compounds found in cauliflower, like Vitamin K, I3C, sulforaphane, and omega-3 mentioned above, also contribute significantly to the health of your heart and blood vessels.

For example, studies have found indoles effective on lipid synthesis, which contributes to indoles’ potential cardioprotective effects. I3C has also been proved to have anti-thrombotic and anti-platelet activities, which are important for promoting cardiovascular health. Sulforaphane can prevent lipid accumulation in the blood vessles, hence helping to keep an unobstructed flow of blood to reduce the risk of getting atherosclerosis and maintain cardiovascular health.

4. Packed with antioxidants and phytonutrients

Like Dr. Mercola said: “Eating cauliflower is like winning the antioxidant and phytonutrient lottery.” In addition to the two conventional antioxidants, Vitamin C and manganese, it contains a wealth of phytonutrients which also act as antioxidants. Such phytocompounds include beta-carotene, beta-cryptoxanthin, caffeic acid, cinnamic acid, ferulic acid, quercetin, rutin, and kaempferol. Anti-oxidants help to lower oxidative stress in your cells and eliminate free radicals in your body.

Studies have shown that the best way to preserve cauliflower’s antioxidants is to eat it raw, followed by having it steam-blanched, steam-boiled, stir-fried, and microwaved. Water blanching and water boiling were found to cause significant losses of phytonutrients in cauliflower.

5. Rich in vitamins and minerals

Cauliflower serves as a wonderful source of nutrients, including antioxidants, such as Vitamin K, Vitamin C, and manganese, omega-3 fatty acids, protein, phosphorus, and potassium. It’s also a good source of Vitamins B1 (thiamine), B2 (riboflavin), B3 (niacin), B5 (pantothenic acid), B6 (pyridoxine), and B9 (folic acid).

According to Dr. Axe, a one-cup serving of this vegetable contains 73 percent of the recommended daily value of Vitamin C. Vitamin C can’t be stored in the human body because it is water soluble, so you have to get it from food. Vitamin C plays an important role in the growth and repair of body tissues, making collagen, healing wounds, and maintaining bones and teeth.

Here comes this amazing compound again, sulforaphane! Besides all the benefits mentioned above, it protects the retina from oxidative stress, which can lead to cataracts, macular degeneration, etc.

Compounds such as sulforaphane, glucoraphanin, and glucobrassicin found in cauliflower help your body detoxify by supporting your liver’s function.

Glucosinolates in cauliflower also play an important role in detoxification and digestion. It helps to trigger the liver to produce detoxification enzymes, support nutrient absorption, and aid in the removal of waste and toxins.

Meanwhile, glucosinolates and sulforaphane can help to protect the lining of your stomach, and prevent bacterial overgrowth in your stomach to facilitate your digestive health. Also, cauliflower is a good supplier of dietary fiber.

Although it has so many health benefits, people who have a pre-existing condition like iodine deficiency, kidney problems, etc., should check with their doctor before consuming it in large amounts.