How Stray Cats Saved a Restaurant During the Pandemic 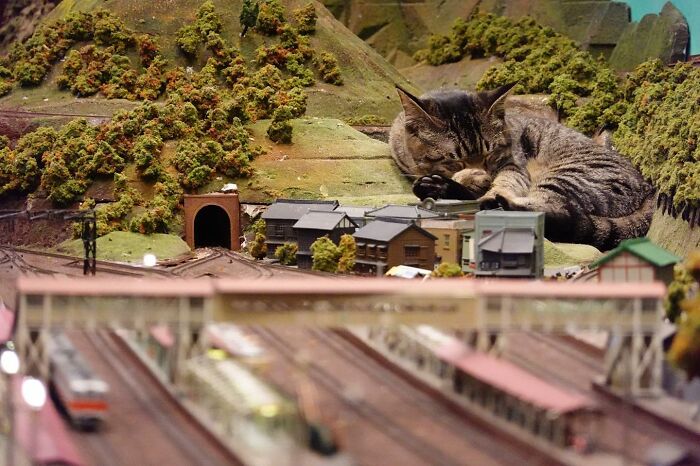 The restaurant on the verge of closing down until it was saved miraculously by a clowder of cats. (Image: via Diorama Restaurant)

The COVID-19 pandemic hit everyone unexpectedly. For some people, together with the feeling of uncertainty and fear, it also brought a lot of financial difficulties. One of them was Naoki Teraoka, a railway model enthusiast and owner of the Diorama restaurant in Osaka, Japan. It was on the verge of closing down until it was saved miraculously by a clowder of stray cats.

The restaurant in question is located in Osaka, Japan. Naoki Teraoka, the owner of Diorama restaurant, is fond of railway models. He started the eatery two years before the pandemic. The cafe was famous for its miniature railway model theme. The people eating at the restaurant admired the miniatures around them.

The pandemic took its toll

The pandemic exhausted him and his family physically and mentally. They were on the edge of giving up everything since there were not enough customers to maintain the business. Foot traffic to his restaurant dropped considerably as the authorities shut everything and people reduced going out for dining. Even when they opened back up, things were far from good.

One day, Naoki noticed a critically ill kitten around 10 days old next to his restaurant. The owner decided to raise the animal and named him Simba. He sheltered it, seeing its health, and after some days, the remaining stray cats showed up. What followed next was a surprising development that rescued his business.

An unlikely savior in the form of stray cats

The 10-day old kitten was named Simba, and he started feeding it well. Soon after, Simba’s mother appeared at the eatery. Naoki started feeding the kitten and his mother as there was enough surplus food due to the lack of customers. The mother cat then brought three other kittens with her.

This inspired Naoki to give his restaurant a theme makeover. The owner put the stray cats beside the rail models and posted the images on Instagram. This made people interested, and the posts soon went viral. Those who saw the images online started coming to the eatery. Before long, his business was back to making a profit. Currently, there are 14 stray cats in Naoki’s small restaurant that were rescued from the streets.

He said: “It was a financially difficult time for us, but we decided to help the cat family. Yes, we thought we were helping them, but they were the ones who helped us.” The stray cats live on the restaurant’s top floor. Now, there are over a dozen stray cats in the eatery. As the restaurant’s popularity increased, people from many parts of Japan came to see it. It can be a pretty and amusing sight, watching the cute creatures posing beside the miniature railway models. Beside the tiny rail models, the cats look like giants!

Currently, there are 14 stray cats in Naoki’s small restaurant, all from the streets. The animals come to customers when they order food and stay with them until they finish their meal.

People showed up to see and maybe adopt the stray cats

Naoki was able to bounce back and make a profit again. As a gesture of gratitude, he wanted to do something for his cute feline friends. So he set up a cat-only hotel and shelter on the second floor. This is not without a purpose, though. The visitors can explore the cat hotel and interact with the stray cats while sipping tea. If they bond with one of the stray cats very well, they may also ask to adopt it. This has gone down well with the customers, and many like the concept very much. Cat lovers have warmed up to the idea, and others applauded Naoki.

Naoki is now an avid cat lover and has rescued over 60 stray cats. His example is an inspiration for other cat lovers and business owners. Those curious about the renovated diorama restaurant and who want to bond with the stray cats can check the website for timing and further details.