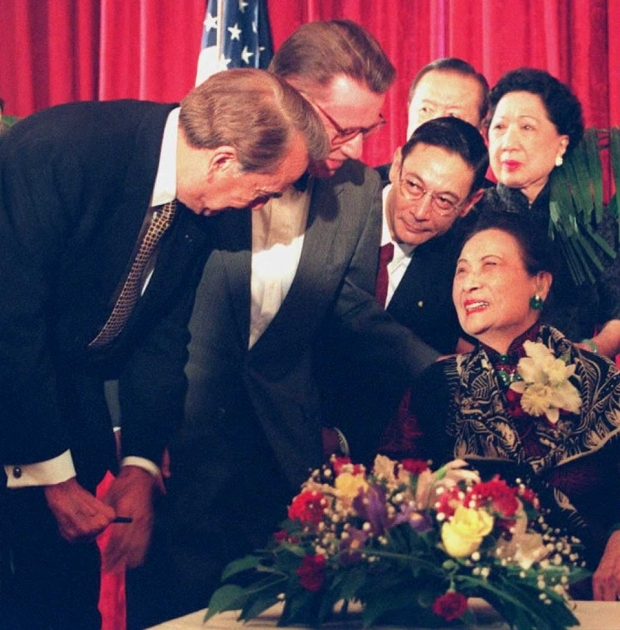 She was a legendary figure in modern Chinese history. During the Second Sino-Japanese War, she called on the Chinese people to fight against the Japanese invasion, and in 1942 conducted a speaking tour in the United States to gain support. She was the first Chinese national and the second woman to address both houses of the U.S. Congress.

Madame Chiang Kai-shek died at the age of 106 in 2003. Her parents and most of her siblings died from cancer. She also received operations twice for breast cancer and once for ovarian malignancy at an old age, yet she survived them.

Madame Chiang Kai-shek followed a light diet, eating five times a day and only eating until half full. If she found out that she was overweight, she would switch to a vegetarian diet until her body weight lowered.

Although medical professionals suggest that enemas should only be performed in severe cases, Madame Chiang Kai-shek performed one every day.

Madame Chiang Kai-shek had a whole-body massage every day because she knew there were many acupuncture points on the back that helped maintain good health.

In the 1950s, she moved from China to Taiwan and hired personal massage therapists until she moved to the United States in 1975. In her old age, two nurses massaged her whole body alternately every day before she went to sleep.

When told that she was an extraordinarily capable woman, she smiled and quoted the Bible: “I have fought a good fight, I have finished my course…” Her spiritual serenity might have had positive effects on her endocrine system.

When Madame Chiang Kai-shek was upset about something, she would find close friends to chat with and get rid of her bad feelings. Steady emotions helped support her respiratory and endocrine systems.

Smoking damages one’s respiratory system and can bring many chronic diseases. Madame Chiang Kai-shek ’s husband advised her to quit smoking for many years, and she finally did stop after he died.

Reading had been Madame Chiang Kai-shek’s hobby for a long time, and she started to learn painting in the 1950s. The pursuit of beauty in the world of art must have helped her concentrate and forget the passing years.

8. Keep a regular schedule and get enough sleep

Madame Chiang Kai-shek kept a regular schedule in her daily life and had about 10 hours of sleep every day. She went to bed at 11 p.m. and got up after 9 a.m.