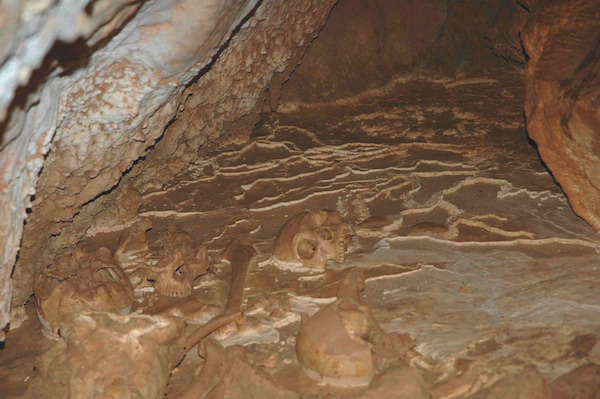 The grim discovery in Belize of the appropriately named Midnight Terror Cave has shed more light on the long tradition of child sacrifices in the ancient Maya society. (Image: via Cal State L.A.)

The Midnight Terror Cave sounds like something that was made up to give you night terrors. But if you were aged between 4 and 14 years when the Maya’s were around, it was your living nightmare.

The grim discovery in Belize of the appropriately named Midnight Terror Cave has shed more light on the long tradition of child sacrifices in ancient Maya society. Out of the 9,566 human bones, bone fragments, and teeth found on the cave floor, a huge portion belonged to children no older than 14 years.

What’s more disturbing is that chemical analysis suggests they were not originally from the area where the cave is located. This indicates that they may have been brought to the area en masse, using the underworld network of caves in Belize to traffic Maya children. Because these bones are so fragmented, it’s difficult to give an estimate on how many individuals are in the cave.

The Midnight Terror Cave is in the west of the Central American nation of Belize. The cave is located to the south of Belmopan, the capital of Belize, and is not far from the Mennonite community of Springfield.

It was first discovered in 2006 when an antiquities looter lost his grip on the rope he was using and fell 60 feet (18 meters) to the bottom of the pitch-black cave into the deep pile of human bones. So rather than stealing relics from the ancient Maya civilization, it seemed he was about to become one of its victims.

However, the looter was in luck. A Belizean Mennonite farmer had heard the looter’s blood-curdling screams and rescued him. The looter had suffered numerous injuries, which included the loss of several teeth that had been dislodged by the impact of his jaw hitting the limestone floor.

While the farmer gathered up the bloodied criminal, he had noticed human skulls in the darkness, and the skeletal remains of a hand reaching for the entrance. Upon seeing what secrets the cave held, the farmer named the cave “Mitnacht Schreknis Heel,” which is Plautdietsch (the Dutch-German Mennonite dialect) for “Midnight Terror Cave.”

It wasn’t long before the Midnight Terror Cave was known to archaeologists, who soon became interested in the site. Studies began in spring the following year, with Dr. James Brady, a professor of anthropology at California State University, becoming one of the main researchers.

After the completion of a three-year survey, researchers have cataloged around 10,000 pieces of human bones, and about three times that number in pottery fragments. Samantha Lorenz is a member of the team of experts who are studying the chemical composition of these remains, including the teeth, in an attempt to learn more about who they belonged to. Lorenz told Collector’s Weekly:

“No one’s from Belize, so that means we have this population of children that was brought in from somewhere else for the purpose of sacrifice.

“And because there are so many of them all coming from the same region, then you have to look at whether there was a trade network, essentially a human-trafficking network, in children.”

By analyzing the tooth enamel, the team was able to show that some victims came from as far as 322 km (200 miles) away (an area beyond the borders of modern-day Belize). While in modern-day standards this is not far, back then it was quite extraordinary especially when you consider that the children may have been brought to the cave for the sole purpose of being sacrificed.

Dr. James Brady, a professor of anthropology at California State University, and Ms. Kieffer a Ph.D. Student in archaeology at the Department of Anthropology, University of New Mexico, wrote a paper in 2012, where they reference the fact that evidence of human traffic had been noted by other cave archaeologists “in the form of trails of concave compacted soil that are still clearly visible a millennium after the abandonment of the site.”

They also point out that previous research has found that sacrificial sites and public rituals require “large, open, and level space” in order to accommodate the number of people for the public ritual. Both features were also found in the Midnight Terror Cave, an altar which was set level on a pile of stones was also discovered.

The thought of children being sacrificed in the Midnight Terror Cave is hard to believe, however, there are supporting facts, such as none of them died of natural causes, they were not buried, and the bones showed signs of perimortem cut marks, blunt force trauma, and also had traces of blue pigment.

Humans who were offered as sacrifices were regularly painted blue; this symbolized that they were being killed for the gods and not killed for another purpose. It is understood that the paint stayed on the bodies as they were accepted by the gods; this made the sacrificial bodies instantly recognizable to the gods.

The Midnight Terror Cave is one of two examples where Mayas sacrificed children on a large scale, the other site being an underground cave at Chichén Itzá in southern Mexico. Radiocarbon dating of the bones has indicated that bodies had been dumped into the cave over a period of about 1,500 years, starting from around 3,000 years ago, which would have been around the dawn of Maya civilization.

It is believed that the sacrifices were to “Chac,” the rain god. Incidentally, the looter’s teeth were also found by the site’s investigators.