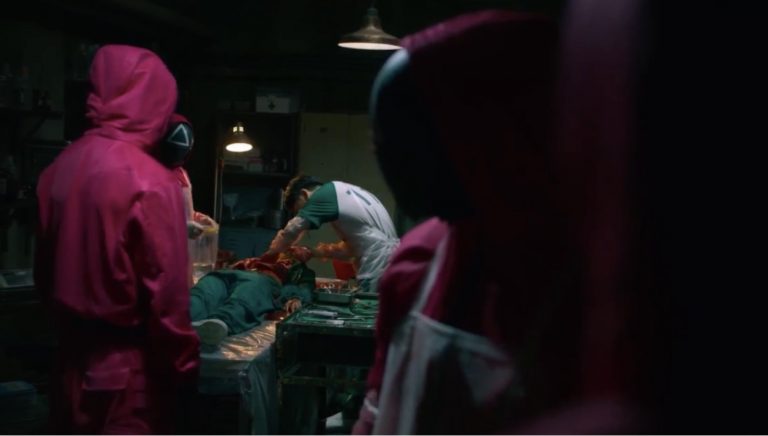 In one of the side plots of ‘Squid Game’ dead contestants have their organs harvested. (Image: via Netflix)

Recently, the Netflix horror series Squid Game, where masked contestants perform organ harvesting from dead contestants, has topped the streaming charts. So is a real-life Squid Game happening in China today? Let’s examine some present and historical evidence that has come to light on this current issue.

The experts said they had received credible information that detainees from ethnic, linguistic, and religious minorities may be forced to have blood tests and organ examinations such as ultrasound and x-rays without their informed consent. At the same time, other prisoners are not required to undergo such examinations. The results of the examinations are reportedly registered in a database of living organ sources that facilitates organ allocation.

The UN experts said: “Forced organ harvesting in China appears to be targeting specific ethnic, linguistic or religious minorities held in detention, often without being explained the reasons for arrest or given arrest warrants, at different locations,” they said. “We are deeply concerned about reports of discriminatory treatment of the prisoners or detainees based on their ethnicity and religion or belief.”

“According to the allegations received, the most common organs removed from the prisoners are reportedly hearts, kidneys, livers, corneas, and, less commonly, parts of livers. This form of trafficking with a medical nature allegedly involves health sector professionals, including surgeons, anesthetists, and other medical specialists.

“Despite the gradual development of a voluntary organ donation system, information continues to emerge regarding serious human rights violations in the procurement of organs for transplants in China,” the UN experts said.

World-renowned Brisbane, Australia, organ transplant doctor Professor Russell Strong told Daily Mail that many Chinese medical trainees take what they’ve learned in the West and use it to harvest human organs back home.

Professor Strong first became aware of Beijing’s horrifying human rights abuses in the late 1980s after setting up a pioneering transplant program at Brisbane’s Princess Alexandra Hospital, where he successfully performed Australia’s first-ever liver transplant in 1985. He was inundated with requests from “mainland Chinese trainees.”

Professor Strong refused to train any doctors unless they obtained a document from their institution stating they would not use executed prisoners as organ donors. He believed this was immoral. However, he was equally aware that this thriving organ black market was state-sponsored (directed by the Chinese government).

A history of slaughtering its citizens for their organs

China first started slaughtering its citizens for their organs as far back as the 1970s, with the issue gaining international condemnation during the 1990s after Human Rights Watch condemned its state-sponsored program targeting prisoners.

This terrifying industry is worth about US$1billion every year, and human rights groups estimate that between 60,000 to 100,000 people are killed annually. However, since 2015, China has claimed that prisoners are no longer being used as organ banks and their official statistics show they are only performing 10,000 to 20,000 transplants surgeries per year. Despite mounting evidence, Beijing claims they are “fabricated” and “defamatory.”

Susie Hughes, the Executive Director of The International Coalition to End Transplant Abuse in China, says the above claims do not stack up. She said that after examining hospital revenues, bed utilization rates, and the number of surgical teams from the official Chinese data… the figure is more likely to be between 60,000 and 100,000 transplants per year.

The world has failed to stop China from engaging in illegal organ harvesting. Why? Being a member state with significant influence over the World Health Organisation, China can under-report organ transplant data without being questioned. Many Chinese doctors know what is happening, but are too afraid to speak out.