Jinshan, a Fascinating Township With Many Wonders 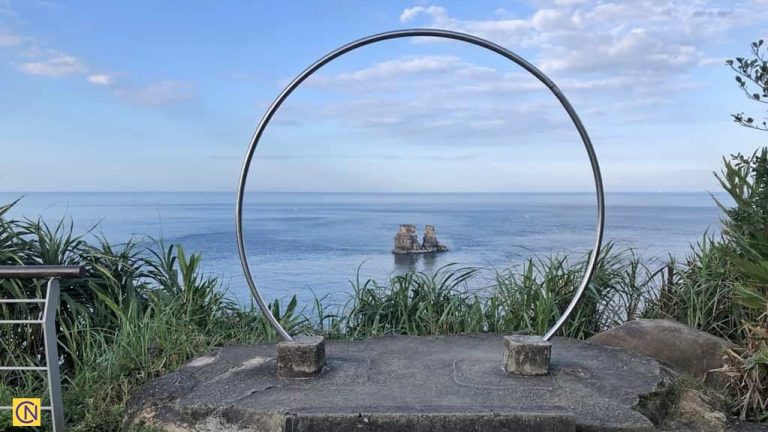 The Twin Candlestick Islets are located just outside of Jinshan Cape on Taiwan’s north coast. (Image: Billy Shyu via Nspirement)

Formerly called “Jinbaoli,” Jinshan is a district in Taiwan’s New Taipei City and is one of northern Taiwan’s most popular tourist destinations. In addition to the stunning Twin Candlestick Islets, the picturesque Shitoushan Park, and the Mysterious Coast, Jinshan’s Old Street, local foods, hot springs, and other art and cultural spots are also hailed as must-see wonders in northern Taiwan.

For more images of the Twin Candlestick Islets and the beauty of the landscape in the vicinity, please watch the following video.

The Twin Candlestick Islets (雙燭臺), also known as the Candle Holder Islets, are two of the most breathtakingly extraordinary rocks along the north coast of Taiwan. Located just 450 m (1,476 ft) off the coast of the Jinshan Cape in New Taipei City’s Shitoushan Park (獅頭山公園), these two upright pillar-shaped reefs draw the attention of those who pass by on the coastal highway.

Standing about  60 m (197 ft) above sea level, these two amazing reefs were originally part of the Jinshan Cape, but they separated due to plate tectonic processes and constant erosion of ocean waves. At one time, the two reefs were connected by an arch, but the top of the sea arch collapsed due to further erosion. Therefore, the present form of two upright pillars was shaped.

Currently, the bottoms of the two pillar-like cliffs are still connected in the sea. However, since the upper part of the cliffs resembles a candlestick holder, they were named Twin Candlestick Islets. Hailed as one of the Eight Wonders of Jinshan, Twin Candlestick Islets have an iconic feature of the District and are a must-see attraction for those who visit Jinshan.

The legend of the Twin Candlestick Islets

According to legend, a woman in Jinshan waited for her husband on the shore every morning when her husband was fishing at sea. One day, the faithful wife finally turned into a rock after failing to see her husband coming back for an extended time.

Unfortunately, the husband came back only to discover that his wife had changed into rock many years prior. He was heartbroken and cried to the rock day and night. Eventually, he also turned into a rock to accompany his wife. Since the rocks resemble a cuddling couple, they are also called the Husband and Wife Rocks by local people. Nowadays, this pair of rocks is especially popular with couples who believe their relationships will be blessed when photographed with the companion rocks.

Just opposite Twin Candlestick Islets is Shitoushan Park, or Lion’s Head Mountain Park (獅頭山公園). It used to be a strategic defense point guarding part of the north coast and the Port of Keelung. As visitors were prohibited from entering this area, its geography and ecology are relatively intact and better preserved.

Apart from the picturesque main path leading to Zhongzhen Pavilion (中正亭), which is a perfect location to enjoy the famous Twin Candlestick Islets, some other well-paved hiking trails lead to various locations in the park.

These beautiful trails allow visitors to explore the natural beauty of the park and coastline and spectacular views of the mountain ranges in the distance, the breathtaking rocky cliffs, and the nearby harbor and villages.

The Mysterious Coast is a newer scenic location hidden between the Shuiwei Fishing Port and Twin Candlestick Islets. This stretch of rocky coastline is nearly 400 m (1,312 ft) long and was opened to the public about 10 years ago after being closed for some 50 years.

Visitors have to climb up the wooden stairs by the Shuiwei Fishing Port and pass a narrow vertical hole between rocks called “The Thread of Sky” or “One-Line Hole” (一線天). Once passing the narrow natural tunnel, visitors would immediately get up close and personal with the grandeur of the ocean and the fantastic coastline close to the rocky cliffs.

Visitors can also see plenty of remarkable giant rocks in various shapes with orange-brown color textures and other stones with green algae on their surfaces.

The Mystery Coast has become more popular among Taiwanese after Oscar-winning director Martin Scorsese picked the coast as one of the filming sites for his film Silence (沉默) in 2016.

What is particularly unique about this old street is its restaurants’ fascinating self-service culture. There are no menus in some restaurants. Instead, visitors pick out the dishes they like along the two sides of the narrow street, carry them to any townhouses with empty tables, and then dine on them inside. Once visitors are done eating, a waiter will stop by with the bill.

Another highlight of Jinshan is its hot springs, famous for their natural purity and thermal properties. There are four types of hot springs in Jinshan: seabed, carbonated, sulfurous, and ferrous.

It is said that the springs in Jingshan can whiten the skin and improve blood circulation. While relaxing in the hot springs, visitors can enjoy a panoramic view of the ocean and the unique mountain landscape on the north coast.