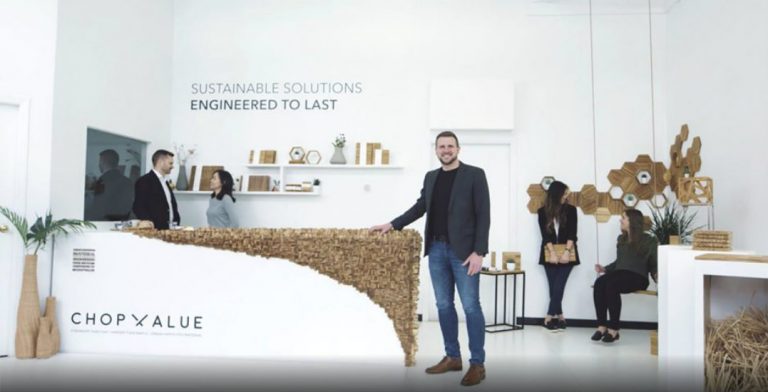 Turning your passion into a vocation isn’t something that happens overnight. Felix Böck, a wood engineer and the founder and CEO of ChopValue, knows this well. (Image: via ChopValue)

People habitually use certain accessories in the kitchen and dining table that end up in the trash. One such example is chopsticks.

First used by the Chinese, they later spread to other East Asian cultural sphere countries, including Japan, Korea, and Vietnam. As ethnic Chinese emigrated, chopsticks as eating utensils for certain ethnic food took hold in South and Southeast Asia. In the 20th century, they became more accepted with Asian food globally.

These utensils are used by billions of people in kitchens and restaurants regardless of cuisine style and preferences. However, disposing of them leads to pollution. Almost 80 billion pairs end up at landfills per year. Moreover, many trees are cut down to supply the wood required for making them.

A unique approach to the reuse of chopsticks

A start-up based in Canada has adopted a unique approach to resolving the problem caused by discarded chopsticks. ChopValue, based in Vancouver, makes used ones into furniture. Its founder, Felix Böck, says: “In Vancouver alone, we’re throwing out 100,000 chopsticks a day. They’re traveling 6,000 or 7,000 miles from where they’re manufactured in Asia to end up on our lunch table for 30 minutes.”

Böck has expertise in wood engineering, and the idea occurred to him when he was pursuing higher studies in Vancouver. He said in an interview: “I had an eye-opening moment when I connected the chopsticks I ate dinner with to the vast amount of under-utilized wood resources from demolished construction sites. I tried to implement a regional program to tackle urban wood waste, but it fell on deaf ears. So I thought the humble little chopstick was a more relatable resource to show how you can build viable business opportunities from resource efficiency.”

ChopValue uses chopsticks and creates furniture for households and business setups. They acquire around 350,000 used ones a week from over 300 restaurants in Vancouver alone. These are then processed and used to make desks, cutting boards, coasters, and bookshelves. Böck says: “Once you see the volume, you think maybe that little humble chopstick can be the start of something big. My expertise is in bamboo, so I always looked at chopsticks differently. I used to joke to my friends that I would make something out of chopsticks since most of the ones we use in North America are made of bamboo.”

However, transforming used chopsticks into furniture is not easy. First, they are coated in a resin solution, and then these get sterilized at a temperature of 200°F for 5 hours. Next, the wood is made into a composite board using a hydraulic machine. The board is later sand polished. The final product is then used to create different kinds of furniture. It is hard to fathom the source by looking at the final pieces.

Böck faced some obstacles, but it was not long before the restaurants he approached could realize the benefits. A Canadian restaurant chain named Pacific Poke now has artwork and tables made using recycled chopsticks.

ChopValue is on a growth track, and Böck wants to take his venture to new heights. It acquired funding worth US$3 million, and last year, its first international franchise was opened in Singapore. He thinks his experience should inspire other entrepreneurs, and this way, environmental pollution can be minimized to a great extent.

Böck thinks that using discarded chopsticks for making furniture is just one example, and many more discarded items can be utilized in this manner. This will help keep the planet green, and cost savings can be achieved simultaneously.