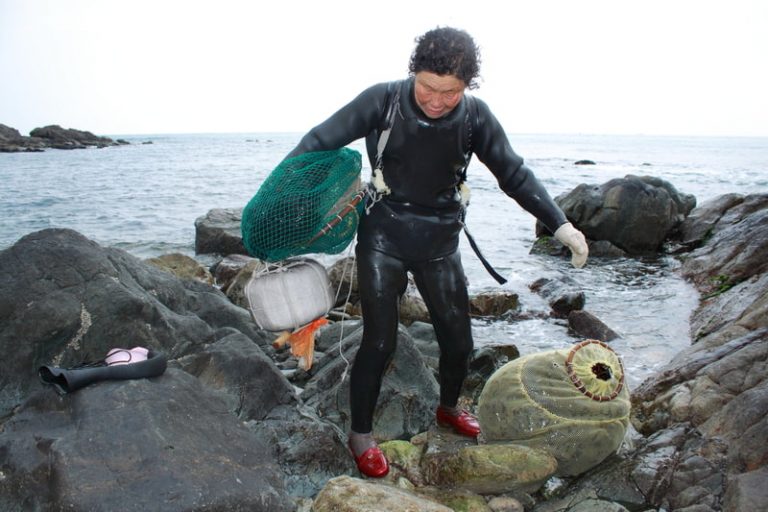 South Korea's 'haenyeo' or 'sea women' used songs to pass the time and eliminate boredom and toil while working as divers. (Image: Mfharrison via Dreamstime)

South Korea has many beautiful tourist spots and Jeju Island is certainly among them. This island is known for haenyeo, or women divers. Haenyeo is a Korean word that means “sea women.” The traditional songs of South Korean diver women are famous and some people are keen on preserving them. On many days, along the coast of Jeju Island, you can spot aged women divers in black rubber suits. A majority of these women are over 60 years old. They use no breathing gear. Instead, they employ a traditional breathing technique known as sumbisori and dive as deep as 32 feet. They look for edible seaweed, sea urchins, clams, abalone, conchs, and even octopus.

The existence of the women divers can be attributed largely to the volcanic soil of Jeju Island. Farming is quite difficult here. It is not known how women became the ones to work as divers. However, historians believe they had no other choice after the untimely demise of their spouses in warfare or marine accidents. It was not something accepted by society, though. Traditional Confucianism says women should fulfill their duty by staying home and having children rather than going out and working. However, the women of this island had no other alternative left.

Up until the 1990s, haenyeo were trying to discourage their daughters from getting into what had always been considered a dishonorable profession in order to spare them from a difficult and shameful life. The physical requirements for divers take a toll on the body over the long term. For example, more than 75 percent of these divers in a 1989 study were shown to have joint disease. However, after UNESCO included them on its Representative List of the Intangible Culture Heritage of Humanity in 2016, the mass perception about them changed. Now, they are one of the driving forces for Jeju tourism.

In fact, several restaurants across Jeju Island try to woo tourists by saying they offer seafood caught by haenyeo. They offer dishes like shellfish noodles and jeonbok (abalone). You will find a majority of their stories covering the 2016 triumph. However, few talk about the painful aspects of the tradition.

Haenyeo Museum’s former director Choa Hye-kyung says: “Haenyeo had always been a people with nothing. They needed their catch to sell to make money, so they didn’t eat what they took from the ocean. They sold it. Things like the abalone they caught were for the upper crust of society. Some kings, like Jeongjo of Joseon, even refused to eat abalone because he came to understand what suffering haenyeo had to go through to get it.”

Haenyeo traditional songs are being preserved

The notable thing is, academic interest in exploring and preserving haenyeo music is on the rise. Choa herself is a historian who has written about them for decades. She thinks the biography she wrote on Ahn Do-in, the woman known as the first guardian of their songs, was a truly memorable experience. She said: “The first time I heard her sing, I remember the sobs in her voice and before I knew it, I was crying too.”

The songs used by haenyeo served a concrete purpose. These women used rowboats to travel to distant locales like Busan, Gangwon province, or even as far as Japan. They sang to pass the time and eliminate boredom and toil. The melodies of their songs matched the rhythm of the sea’s waves. The subjects of these songs were often sorrowful, consisting of the hard facts of life. There are almost 10,000 known tunes and few of these have titles. These songs are replete with tragedy and irony and express the resilience of Jeju’s women. Many songs contain lyrics in which the women are lamenting over the day they were born, expressing how useless their husbands are, and protesting the government.

After the 1960s, things started changing for the people of Jeju Island. Haenyeo songs were designated as the first Intangible Cultural Asset of the region in 1971 by the provincial government. Then in 1998, Ahn Do-in was made the first official guardian of these songs. Now, the songs are preserved by two women, Kim Young-ja and Kang Deung-ja, both in their 80s. In recent years, there has been a trend to modernize the songs and make them more upbeat to appeal to a younger audience. However, the traditional haenyeo singers feel these songs should be preserved in their original form, expressing the desperate sadness of women from earlier times.