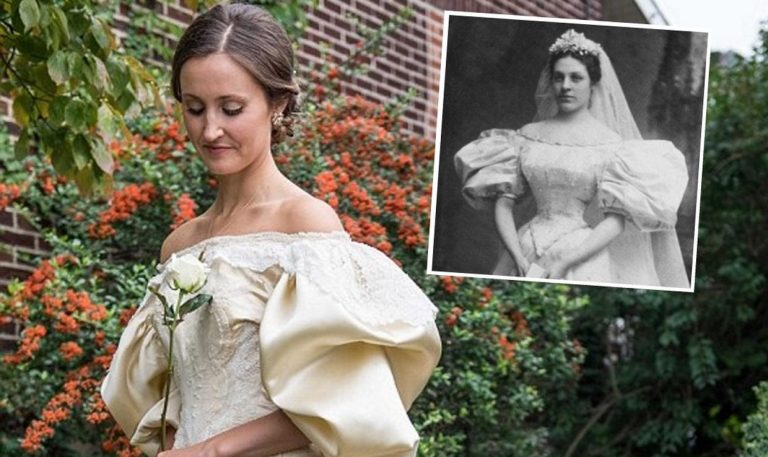 It is not uncommon to see women using antique ornaments on their wedding day in several families. In addition, there are instances of brides wearing garments used originally by family members in the past. However, finding a bride wearing a 120-year-old heirloom wedding dress is not common.

The heirloom wedding dress was first worn in 1895

This is what Abigail Kingston experienced. Before her, 10 women in the family wore this beautiful Victorian-style attire on their wedding days. As a child, she saw pictures of those women wearing the same garment. The dress was worn first by Mary Lowry Warren, her great-great-grandmother, back in 1895.

Pennsylvania-born Abigail got engaged to fiancé Jason Curtis, and after that, her mother Leslie wanted to find out the special bridal attire was. Both of them were keen on getting the dress for the wedding night. They found out where Sara Seiler, her great aunt, had the dress. Seiler was the 4th woman in the family to wear the unique gown in 1960. Then it was given to two of her daughters, who wore it on their respective wedding days.

The great aunt of Abigail sent the Victorian-style gown to her, and archival tissue paper was used to pack it and ensure no damage was done during the transit. She was delighted to receive the dress, but upon opening the box, she was doubtful. The gown needed extensive repairs. Leslie found it was not the same as when she had worn it back in 1976. As it is, only one of the 10 brides got it dry-cleaned. They realized it required cleaning and customization to fit well.

Abigail and her mother felt they could not restore the dress to its former glory. So they got in touch with noted bridal designer Deborah LoPresti, well-known for her skill in restoring vintage dresses. It was certainly not an easy task for LoPresti to fix the vintage bridal gown. It had yellowed and, owing to the ravages of time, was replete with tears and holes.

Her salon team spent a lot of time salvaging the damaged wedding dress. They even had to make a trip to New York City for fabric matching. It took 200 hours before the wedding dress was restored to its former state, and it looked champagne-hued. LoPresti ensured the repaired wedding dress would look stunning. Still, it was very delicate. So Abigail used it only for a cocktail party. For the outdoor ceremony, she chose a Rivini wedding gown.

She felt like Cinderella the first time she put everything on

Both Abigail and her mother were pleased with the result, and they felt all that effort and expenditure was worth it. Abigail wanted to look her best, so she paired the wedding dress with a set of sparkly gold shoes. She said: “I felt like Cinderella the first time I put everything on. I seriously felt like I got the dress in rags and turned it into riches. I’m equally as excited to have two dresses to wear on my wedding day to incorporate something old, something borrowed, and something new.” The inclusion of her grandmother’s blue star sapphire ring made the picture complete.

Leslie was emotional seeing her daughter in the heirloom wedding dress after so many years. She found it hard to control her tears. She said that the wedding dress is unlike any other wedding attire as it carries the touch and emotions of so many brides belonging to the family. But, she added: “It is not the style or the fit or the condition of the gown that matters. But rather the love that has been handed down through the generations.”