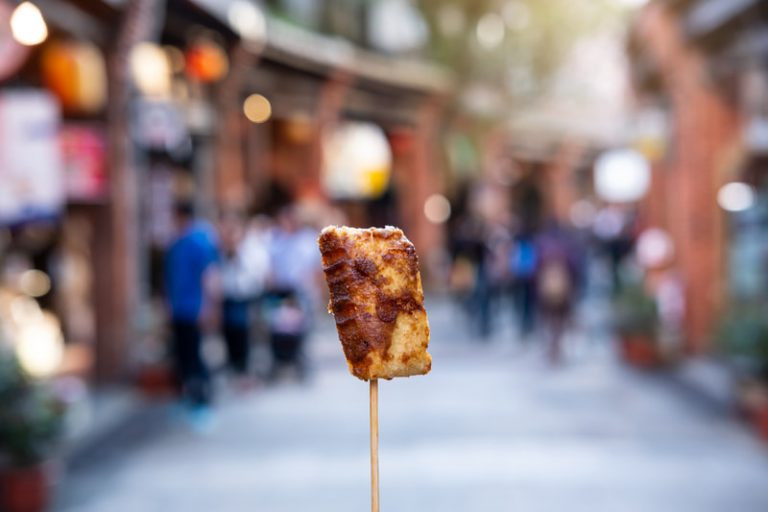 Stinky tofu is a food that is disgustingly delicious. (Image: Kittiphan via Dreamstime)

If you’ve never tried stinky tofu, that’s understandable. It’s a dish you don’t often see outside of Taiwan, or outside certain parts of China.

It is probably one of the dishes immigrants are least likely to bring overseas with them, not because they don’t love eating it, but because it would be a challenge to get foreigners to share that same love. Head to Taiwan and the streets are filled with the overpowering smell of stinky tofu.

It emanates from the pores of the cities where it is popular. Its odor is unmistakable. It’s impossible that you won’t remember eating it. In fact, its taste would have stayed long etched in your tongue’s memory.

Stinky tofu is a food that is disgustingly delicious. It’s one of those foods you eat when you want mealtime to offer a challenge. But with each bite of stinky tofu, the challenge lessens as you realize that smell and taste don’t reflect each other.

The smell was designed to keep you away, but the taste reels you in. Stinky tofu simultaneously attracts and repels, with a taste much different than its smell, kind of like a really friendly dog with a vicious bark that keeps you from petting it.

Deep-frying is the most popular way of cooking stinky tofu

The most widespread way of cooking this food you are likely to see in Taiwan, Hong Kong, and some places in China is the deep frying method. Just like other deep-fried foods, deep-fried stinky tofu is a savory, greasy treat.

Deep-fried stinky tofu is often sold by street vendors, who fry it in a food cart. The smell also helps sales, as people can follow the ridiculously powerful odor and track down the source for a snack. Those who eat it will soon discover that the plate full of grease and fried bean curd is quite delicious, and even addictive.

Other types of stinky tofu include a soft version and a barbecued version. The barbecued variety is more approachable, as the odor isn’t as challenging. The mix of spices used also spreads the stink thinner.

But there are numerous ways vendors make stinky tofu. Varieties are especially numerous in Taiwan, where the dish has many adherents. All the specialist makers are secretive about what ingredients go into their flavoring mixture.

Though you might catch sight of how they cook the tofu in streetside kitchens, to truly understand the process, you need to know what goes into the flavoring and fermentation stage.

As Reuters reports, long before the tofu hits the frying pan or the barbecue grill, it sits in a brine mixture that gives it its unique smell and taste. That is where the difference lies between all the chef’s varieties of stinky tofu.

To reveal their individual process of fermentation would give it all away. The brine mixture itself has to ferment, and then the tofu is added to sit for days, weeks, or even longer. Times can vary significantly from one vendor to another.

There are some quick varieties of stinky tofu. Some are sold ready-made in supermarkets. These give you only a fraction of the experience of eating the freshly cooked version. Some bottled stinky tofu, to its credit, looks absolutely gross.

Especially the one carrying the name of the legendary Qing Dynasty scholar who is believed to have invented stinky tofu after failing the imperial exam. Wang Zhihe hoped to become a government official, but instead made a mistake by leaving a portion of the tofu he sold out for a little too long in a flavoring mixture until its color turned green and its flavor penetrated deep.

So instead of helping to govern the empire, he invented a wildly challenging and beloved Chinese dish.