The Antikythera Mechanism Gives Up More of Its Secrets 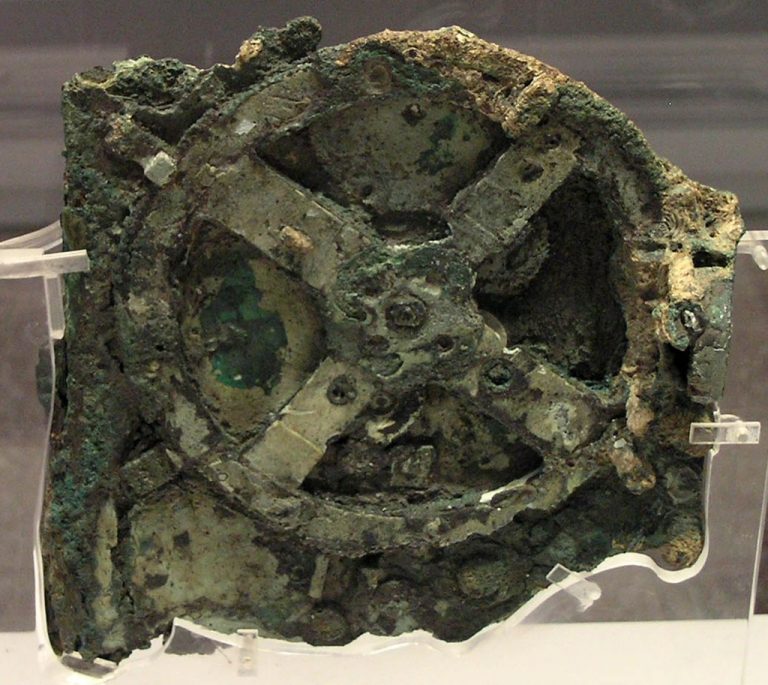 Discovered in a shipwreck on the floor of the Aegean Sea off the coast of Greece in 1901, the Antikythera Mechanism is an intricate high-tech relic from an ancient age. (Image: via Wikipedia)

The Antikythera Mechanism has fascinated and puzzled researchers for over a century. Now, an international team of scientists has announced that they’ve finally deciphered more secrets from the world-famous machine.

Discovered in a shipwreck on the floor of the Aegean Sea off the coast of Greece in 1901, the Antikythera Mechanism is an intricate high-tech relic from an ancient age. Dated around 150 B.C., the device was used to calculate astronomical events and other celestial happenings.

Because of its advanced technological design, the device has been described as an ancient computer. By deciphering a few words from the corroded fragments of bronze gears and plates, experts were able to guess that the Antikythera Mechanism was an astronomical instrument. However, many of its inscriptions remained hidden.

The Antikythera Mechanism has been broken into 82 pieces, with some inscribed with a faded ancient text. These inscriptions were all but impossible to read — until now. After 12 years of intensive study and using cutting-edge computer scanning equipment, scientists have been able to decode some of the inscriptions.

Around 3,500 characters, some of which are only 1/20th of an inch (1.2 mm) tall, gave the user the ability to see exact times of eclipses of the Moon and the Sun and the motion of celestial bodies; sort of like a philosopher’s guide to the galaxy.

The international team of scientists deciphered just a quarter of the original text, most of which came from the innards of the 2,100-year-old remains. Team member Mike Edmunds, an emeritus professor of astrophysics, said at a press conference:

“It’s not telling you how to use it, it says ‘what you see is such and such,’ rather than ‘turn this knob and it shows you something.'”

Alexander Jones, a professor of the history of ancient science at New York University, who is also part of the team, said:

“Now we have texts that you can actually read as ancient Greek, what we had before was like something on the radio with a lot of static.

“It’s a lot of detail for us because it comes from a period from which we know very little about Greek astronomy and essentially nothing about the technology, except what we gather from here, so these very small texts are a very big thing for us.”

The Antikythera Mechanism was designed as a clockwork calendar

The Antikythera Mechanism was originally enclosed in a wooden cabinet with dozens of interlocking brass gears. The deciphered language pretty much confirms what archaeologists had already suspected — that the Antikythera Mechanism was designed as a clockwork calendar that showed the phases of the Moon, the position of the Sun and the planets, and even the time of predicted eclipses. Jones added:

“It’s like a textbook of astronomy as it was understood then, which connected the movements of the sky and the planets with the lives of the ancient Greeks and their environment. I would see it as more something that might be a philosopher’s instructional device.”

The Antikythera Mechanism has a handle on the side, and by turning this, it rotated the gauges in the front and rear. The user could set a date, and then the machine would reveal the astronomical phenomena that would occur.

Physician Yiannis Bitsakis, who also spoke at the presentation, explained that the NASA website now details all the eclipses of the past, and those that are to occur in the future, saying:

“What we do with computers today, it was done with the Antikythera Mechanism about 2,000 years ago.”

With the decoding of the inscriptions, more questions arose, such as the color of a forthcoming eclipse. Edmunds explained:

“We are not quite sure how to interpret this, to be fair, but it could hark back to suggestions that the color of an eclipse was some sort of omen or signal. Certain colors might be better for what’s coming than other colors.

“If that is so, and we are interpreting that correctly, this is the first instance we have in the mechanism of any real mention of astrology rather than astronomy.”

Nevertheless, it is understood that the overriding objective of the Antikythera Mechanism was astronomical and not astrological. Alexander Jones, a history professor at the Institute for the Study of the Ancient World in New York, believes:

“The texts were meant to help the viewer to understand what was the meaning of all the different points and dials, what it would teach them about the cosmos that they lived in … and about how, through cycles of time this related to their lives.”

“The most important thing is that we see laws of physics applying inside the mechanism, and the proof is in the inscriptions and the numbers 76, 19, 223 that also show the name of the manufacturer, who tells us clearly ‘I am a Pythagorean.’”

Edmunds explained how it all started, saying:

“The original investigation was intended to see how the mechanism works, and that was very successful.

“What we hadn’t realized was that the modern techniques that were being used would allow us to read the texts much better both on the outside of the mechanism and on the inside than was done before.”

After the painstaking process of reading each of the tiny letters, the team concluded that the style of the text (both formal and detailed) implied that it was designed to be more than just a rich collector’s plaything, with Edmunds saying:

“It takes it, to me, out of the realm of executive toys; an executive wouldn’t pay all that money to have all that waffle, it’s more serious than a toy.”

The researchers believe that the device was most likely made on the island of Rhodes; surprisingly, they also believe that it’s not unique. It’s only unique in the sense that it is the only one to have ever been discovered.

Because of slight variations in the inscriptions, the team points to at least two people being involved, and there may have been more people making its gears. Edmunds said:

“You get the idea that this perhaps came from a small workshop rather than one individual.”

There are over a dozen pieces of classical literature that refer to devices such as the Antikythera Mechanism over a period from around 300 B.C. to A.D. 500  The calculator could add, multiply, divide, and subtract.

It was also able to align the number of the lunar months with years and display where the Sun and the Moon were in the zodiac. It did contain certain imperfections, but yielded a clear snapshot of the astronomical knowledge at the time, said Jones, adding:

“If you looked in the sky you would still see the body that the mechanism was showing, roughly, in the place of the mechanism, but it would not be very exact.”

It remains unclear why the technology was lost, with the same mechanical complexity remaining unrivaled for at least another 1,000 years, with the appearance of medieval clocks in European cathedrals.

Scientists all agreed the Antikythera shipwreck is still the most important wreck to have been discovered in human history. Now, they’re hoping that by revisiting the shipwreck, there will be more pieces uncovered that may have been overlooked, or possibly even another similar Antikythera Mechanism.