Mystery Behind the Suicide Forest 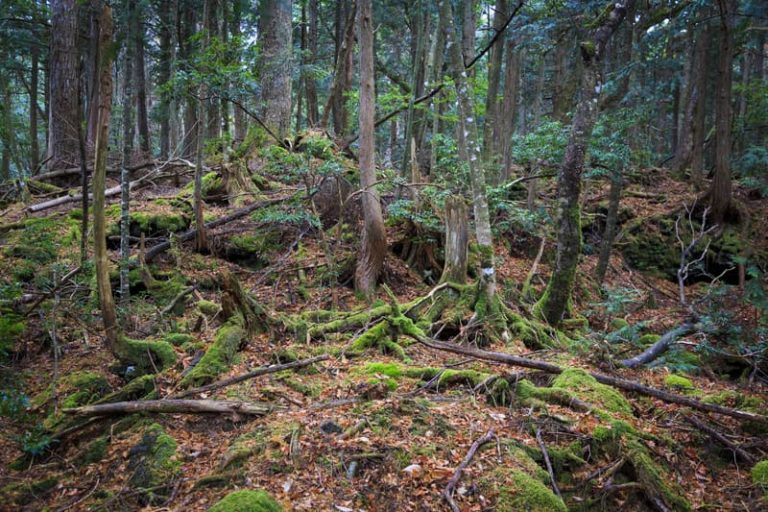 At the base of Mount Fuji in Japan is a forest called Aokigahara, also known as 'suicide forest'. (Image: Jef Wodniack via Dreamstime)

There are places on Earth that just seem so cursed that its evil just creeps into your mind — this is one of those places. Resting in the shadow of Mount Fuji lies a forest cloaked by death, known as the suicide forest, making it the world’s second most popular suicide location.

At the base of Mount Fuji is a forest called Aokigahara, locally known as Jukai (“Sea of Trees”) because of its very high density of trees. The forest also contains two caves known as the Ice Cave and the Wind Cave, with tourists flocking to see them. All this may seem very majestic; however, looks can be deceiving. There is another name for this forest — “suicide forest.”

While parking your car in the parking lot, you can’t help but notice all the abandoned cars. As you first enter the forest, you are greeted with signs saying: “Please reconsider, think carefully about your children and your family,” and “Your life is a precious gift from your parents. Think about them and the rest of your family. You don’t have to suffer alone, please consult the police before you decide to die!”

Not the greeting sign you would expect. As you move further into the forest, the first thing that feels a little disturbing is the quietness, as there is barely any wildlife in here. Is it this quietness that has attracted people to consider it haunted? There are many Japanese who would not dare enter the forest.

The first people to lose their lives in the suicide forest were from a custom that dates back as far as the 19th century called ubasute (abandoning an old woman). It was later changed to oyasute (abandoning a parent). This custom involved carrying a sickly or elderly relative to a mountain (remote desolate place), and leaving them there to die. They would die a rather painful death, either by dehydration, starvation, or exposure. It was thought of as a form of euthanasia.

Locals believe that the suicide forest is haunted by the victims of ubasute and oyasute. Yurei (ghosts who suffered a violent and unnatural death; as well as demons), as they are called, have become vengeful ghosts relentlessly prowling the twisted trees. Tengu (bird-like demons) are also thought to haunt the place, with some visitors claiming to have seen white spectral beings glide between the trees.

Visitors often report hearing bloodcurdling, unnatural screams while in the forest; it is believed that the yurei are responsible. Some survivors of suicide attempts have said they had a vague feeling of being called to or even pulled toward the forest, giving an inexplicable compulsion to enter into the darkness of the forest. Some even call the forest “Yukai Forest.”

Fifty monks constructed a temporary altar in the car park at one point to pray for the repose of the troubled spirits of Aokigahara. One of the Buddhist monks, Kyomyo Fukui, was reported to have said:

“The spirits are calling people here to kill themselves — the spirits of the people who have committed suicide before.”

At least 500 people have committed suicide in the suicide forest

Since the 1950s, at least 500 people have entered the suicide forest, only to leave as a corpse, and that’s just the bodies that were discovered in the 14 square mile area. This gives the forest the morbid title of the second most popular suicide spot in the world. Suicides increased after a novel by renowned author Seichō Matsumoto was published in the 1960s. The book, titled Tower of Waves, had a pair of young lovers that took their lives in the forest in a romantic ending.

Then in 1993, a book called The Complete Manual of Suicide by Wataru Tsurumi added fuel to the fire. It was a guidebook for those looking to kill themselves. In it, he praised hanging (the most common method used in the forest) as a “work of art,” calling Aokigahara the ideal place to die. The author also described which parts of the forest are less circulated so your body cannot be found later on: “You will become a missing person and slowly disappear from people’s memory.”

Somewhere between the “Brothers Grimm” and “The Blair Witch Project,” this is truly an eerie forest. The trees grow tight against one another and have creepers draped around their trunks. The forest floor is littered with fallen branches and rotting logs, all overgrown with moss. Even on the brightest of days, it is all shadows, making it hard to make out shapes. To make matters worse, the iron deposits in the volcanic soil are believed to cause compasses to malfunction.

Even GPSs often do not work under the canopy, leaving even experienced hikers lost and confused. Many hikers have claimed that it is oddly easy to get lost in this dark and silent place. If you were to listen to the stories, you would hear of experienced hikers mysteriously traveling in circles, or being unable to navigate even short distances successfully.

It is for this reason you would have been told to never leave the trails. When people do, they often string tape behind them in an effort to find their way back—although some say the string is only to make the corpse easier to find. In most cases, when you follow the tape you will find something at the end. Either way, they’re everywhere within the forest.

While using tape sounds like a good idea, there is one woman who claimed that her tape had been deliberately cut. This resulted in her getting lost in the 14 square miles of the forest. She did however make it out, but who would have cut her tape? Could it have been one of the demons who are believed to lead travelers astray?

As you go deeper into the forest, you will soon become aware of the bizarre and somewhat creepy litter strewn around the forest floor. You may even come across pairs of shoes, of both children and adults, lined up on moss covered logs. Lying on the twisted roots of a tree is a child’s doll, its constant stare pointed toward the canopy as if trying to see the sky beyond. In any other forest, these items would be out of place; however, in this forest, it is now expected.

Other items left behind range from scattered personal belongings, photographs, briefcases, ripped clothing, straightforward suicide notes, to abandoned campsites. However, while negotiating through suicide forest, hikers often come across the horrific sight of a corpse hanging from a tree or a skeleton with its legs poking out of the dense foliage on the forest floor. In some cases, animals have been seen feeding on yet undiscovered corpses.

Many believe the lost souls are infused into the very trees, driving away wildlife, and preventing many who enter from ever escaping. It is also believed that they are condemned to forever inhabit the forest, trapped within the trees, forever summoning others to join them.

Annual “body hunts” are held where police and volunteers scour the forest for victims; however, the true number of suicides remains unknown. This is due to the remoteness of areas within the forest, the numerous caves, crevasses, and caverns, and of course the forest’s ability to quickly and thoroughly decompose the remains. The only thing that is known is every year the number of those who come to Aokigahara to die seems to be ever increasing.

Forest workers have to carry the bodies down from the forest to the local police station, where the bodies are placed in a special room used specifically to house suicide corpses. The workers then play rock, paper, and scissors to see who has to sleep in the room with the corpse. Legend states that it is very bad luck for the yurei (ghost) of the suicide victims to be left alone. Their spirits are said to scream throughout the night, and their bodies will move on their own.

The good thing is not all people are successful with their suicide attempts; however, not all leave unscathed. Hideo Watanabe, a shop owner at the entrance of the forest, revealed to Japan Times that he has seen numerous people exit the forest after failing to kill themselves. Watanabe said of one survivor:

“She had tried to hang herself and failed. She had part of the rope around her neck and her eyes were almost popping out of their sockets. I took her inside, made her some tea, and called an ambulance.”