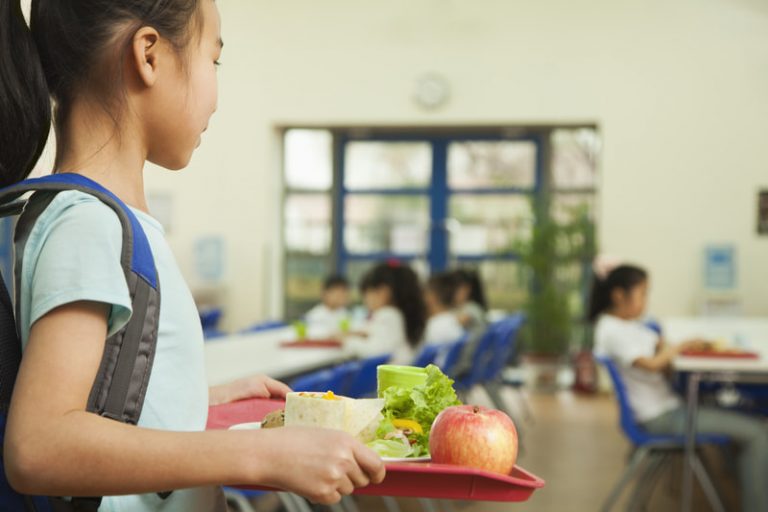 Lunchtime for students in Japan follows a fundamentally different approach to that in the U.S., considering it to be about more than just the food itself. (Image: Shannon Fagan via Dreamstime)

School lunches in the U.S. have been questioned for years. Most often, it is only the quality of the food that is discussed. Efforts have been made to improve this aspect, but what about the other factors involved? Are we so focused on the food itself that we’re missing a larger, more important concept?

This video of lunchtime in Japan showcases a fundamentally different approach to school lunches — that it’s a learning opportunity. According to the principal: “The 45-minute lunch period is considered as an educational period, same as math or reading.”

This is vastly different from lunchtime in the U.S., which is merely considered a time to eat and socialize with friends. What surprised me most was how the Japanese students were involved in the entire process. Students not only had duties during lunchtime — such as fetching food from the kitchen, dishing it to other students, and reading out where the food came from — but they also grew and harvested the potatoes from the school garden. They actually learned how to grow the food that they consumed!

Something else that amazed me was that in less than three hours, five cooks were able to make 720 meals from scratch. The meal consisted of fish, mashed potatoes, vegetable soup, bread, and milk. Preparing a healthy school lunch from scratch would be considered nearly impossible in the U.S.

After everyone had finished their first serving, the Japanese students rock-paper-scissored for the leftovers. There was zero food wasted. This is in stark contrast to schools here in the U.S., where food waste is a huge problem.

When everyone finished eating, they all opened their milk cartons for recycling, brushed their teeth, brought the dirty dishes back, and cleaned for 20 minutes. They didn’t have a janitor to clean up everything. Even the younger children were expected to clean up after themselves.

Although U.S. school lunches have improved in many places since I was a kid, we could definitely gain a lot from adopting the Japanese-style lunchtime. Using it as a learning opportunity teaches kids to be responsible for themselves, and can help prepare them for the real world.

What do you think? Do you know of any other approaches to school lunches in different countries?