Birds of Prey Suppressed by Lead Poisoning From Gun Ammunition 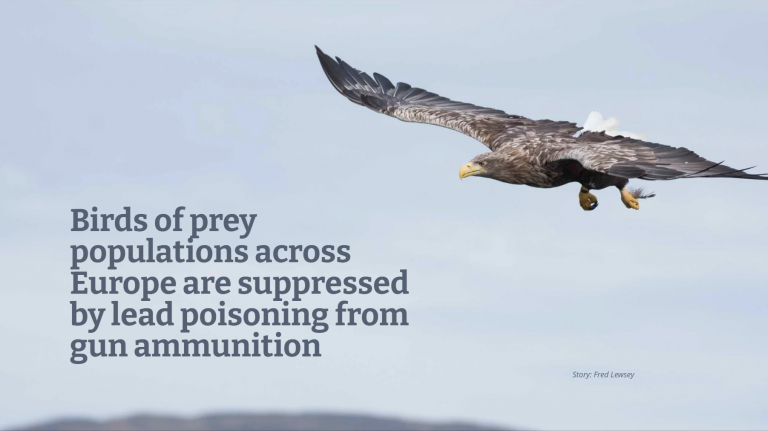 A new study uses data on lead levels in the livers of thousands of dead birds of prey to calculate the impact of lead poisoning on population size. Poisoning caused by preying on or scavenging animals shot by hunters using lead ammunition has left the populations of many birds of prey far smaller than they should be, according to the first study to calculate these impacts across Europe.

When birds of prey like eagles and red kites scavenge carcasses or eat injured animals with fragments of toxic lead from gun ammunition embedded in their bodies, they can become poisoned, suffering slow and painful deaths. Smaller doses have been shown to alter behavior and physiology.

Now, scientists from the University of Cambridge have used data on lead levels in the livers of over 3,000 birds of prey found dead in more than a dozen countries to calculate the extent to which poisoning by lead ammunition has affected Europe’s birds of prey populations. Researchers estimate that, for 10 birds of prey species, poisoning from lead ammunition alone has resulted in an absence of around 55,000 adult birds from European skies.

Worst affected are species like eagles that are naturally long-lived, rear few young per year, and breed later in life. However, even populations of species familiar to bird-watchers across countries like the UK, such as the common buzzard and red kite, would be significantly bigger were it not for lead ammunition.

Common buzzard populations are 1.5 percent smaller, but this equates to almost 22,000 fewer adults of this widespread species, say the researchers. They estimate that the overall European population of 10 raptor species is at least 6 percent smaller than it should be, solely as a result of poisoning from lead ammunition. The findings are published today in the journal Science of the Total Environment.

The scientists say that a range of alternatives to lead shotgun cartridges and rifle bullets are widely available to hunters and work well. However, efforts by UK hunters’ organizations to instigate voluntary bans on lead shot in hunting have had almost no effect.

Research by the same Cambridge authors published just last month shows over 99 percent of pheasants killed in the UK are still shot with lead, despite hunting groups urging members to switch to non-toxic gunshot in 2020, with the aim of phasing out lead use by 2025. Lead author Prof Rhys Green, a conservation scientist at the University of Cambridge and RSPB, said:

“The continued blanket use of lead ammunition means that hunting as a pastime simply cannot be considered sustainable unless things change. Unfortunately, efforts to encourage voluntary shifts away from lead shot have been completely ineffective so far.

“The kinds of reductions in raptor populations suggested by our study would be considered worthy of strong action, including legislation, if caused by habitat destruction or deliberate poisoning.”

Currently, only two European nations — Denmark and the Netherlands — have banned lead shot. Denmark plans to follow this up with a ban on lead rifle bullets. Both the European Union and the UK are considering legal bans on all lead ammunition due to effects on wildlife and the health of human consumers of game meat, but many hunting groups oppose this, according to researchers. Some birds of prey are poisoned when they scavenge from dead animals killed with lead ammunition. This can be a whole carcass lost or abandoned by hunters, or — for example — the guts of a hunted deer, discarded to reduce carrying weight.

As well as vultures, which rely on scavenging, many other birds of prey also scavenge when the opportunity arises, including eagles, buzzards, and kites. Many dead pheasants at UK roadsides carry lead shot and fragments in their bodies and are scavenged by buzzards and red kites. Other species, such as falcons and goshawks, are exposed through preying upon live animals with lead embedded in their bodies from being shot and injured, but not killed. X-ray studies of wild ducks in the UK have shown that about a quarter of live birds have shot in their bodies. Injured ducks or pigeons are less likely to be able to evade predatory birds. Study co-author Prof Debbie Pain, from the University of Cambridge, said:

“It’s taken decades for researchers from across Europe to amass sufficient data to enable us to calculate the impacts of lead poisoning on raptor populations. We can now see just how substantial population impacts can be for some of our most charismatic and vulnerable species – species that are protected by EU Regulation and the UK Wildlife & Countryside Act.

“The avoidable suffering and death of numerous individual raptors from lead poisoning should be sufficient to require the use of non-toxic alternatives. These population-level impacts make this both doubly important and urgent.”

For the latest study, researchers used population modeling to calculate how big Europe’s birds of prey population would have been were it not for the destructive impact of a single “additional mortality factor” — lead poisoning from ammunition. They took data gathered since the 1970s from the livers of thousands of dead birds of prey in 13 nations and tracked the relationship with “hunter density” — average numbers of hunters per square kilometer in each country, using data from the European Federation for Hunting and Conservation.

Unsurprisingly perhaps, places with a higher density of hunters had more poisoned birds of prey. Scientists used this relationship to predict rates of poisoning in countries without data from bird livers, but where “hunter density” is known. Their results indicate that a country with no hunters using lead ammunition would have virtually no lead-poisoned birds of prey. Scientists say their estimates are conservative, not least as data on poisoned birds of prey is limited and hugely difficult to gather. For many European raptor species, including some of the rarest ones, there was insufficient data to estimate how great the risk is.