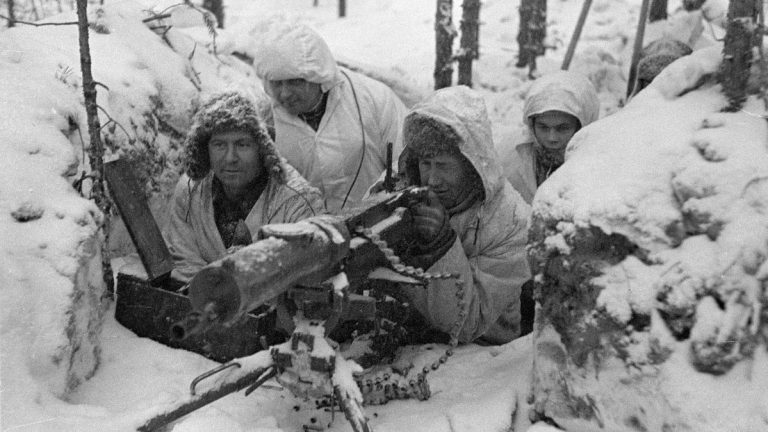 A Finnish machinegun nest during the 1939-1940 Winter War. (Image: Military Museum of Finland)

Finland’s Winter War of 1939-1940, also known as the Russo-Finnish War, saw the tiny Finnish army take on the might of the Soviet Union’s communist army.

There was mistrust between the two countries. Finland believed the Soviet Union wanted to expand into its territory, and the Soviet Union feared Finland would allow itself to be used as a base from which enemies could attack.

Finland declared itself neutral at the start of the Second World War, but the Soviet Union demanded concessions. Finland delayed, using the time to mobilize its army, and sought help from Sweden and the Western Allies, including Britain and France, but with little success.

Watch this video of Dr. Felton’s description of Finland’s 1939-1940 Winter War and its relevance to today’s war against Ukraine:

A faked border incident gave the communist the excuse to invade on November 30, 1939. The Soviet communist army was ill-equipped, poorly led, and unable to deal with the Finnish terrain and winter weather. Though small and under-resourced, the Finnish military was resilient, well-led, and was able to use knowledge of the terrain to good effect.

Outmanned and outgunned, the Finns lived through indiscriminate bombings of the capital city of Helsinki while fighting simultaneous battles at Suomussalmi in central Finland and on the Karelian Isthmus. With Molotov cocktails, motti, and sheer determination, the Finns stopped the Soviet communist army from breaking through the front lines.

In response to the motivated, highly mobile, easily concealed, and lethal Finnish forces, the Soviets changed tactics, eventually breaking through Finnish defenses with massive bombardment campaigns and tanks supporting infantry movements. This led to a peace agreement that forced Finland to cede eleven percent of its territory. However, its success in bleeding the Soviet communist army white led Finland to remain a democratic nation.

Fast forward to today, and the Russian military on paper outnumbers and outguns Ukraine in terms of land, sea, and air capabilities. Although there are apparent differences between Finland’s Winter War and the current war in Ukraine, the similarities are striking.

While the motivations for both wars are different, Stalin’s desire for a territorial buffer north of Leningrad is comparable to Putin’s desire for a sphere of influence over Ukraine that keeps NATO distant, the casualty figures are similar.

Ukraine also receives significant arms shipments today that significantly level the playing field. Still, like Finland, it can only do so well in the face of an enemy against which it is still ostensibly outnumbered and outgunned.

The cost for Russia

The recent peace talks between Russia and Ukraine have yet to achieve a breakthrough. Ukraine is already willing to forgo NATO membership, though such a concession is unlikely to appease Putin enough to withdraw his forces.

As such, Ukraine must continue to fight, hold, and retake as much territory as possible to obtain a favorable deal at the negotiating table. A protracted war would also certainly damage Russia’s long-term prospects and leave it in a less advantageous position at the bargaining table.

This is besides the economic cost to Russia that will likely leave its economy and military in tatters and a Putin presidency in question. It may also cause Beijing and President Xi to pause regarding the potential cost in terms of money and troops of a sea/land invasion of Taiwan.

Ukraine may have to concede Russian control of Crimea or even allow Donetsk and Luhansk to remain autonomous but unrecognized. Looking back, even though Finland lost a portion of its territory to the Soviets, the country remains free and is an active member of the European Union today.

Just like the Finns during their Winter War, the Ukrainians are using their intelligence, creativity, and grit to bring the Russians to their knees. And once again, Russia has underestimated its neighbors.