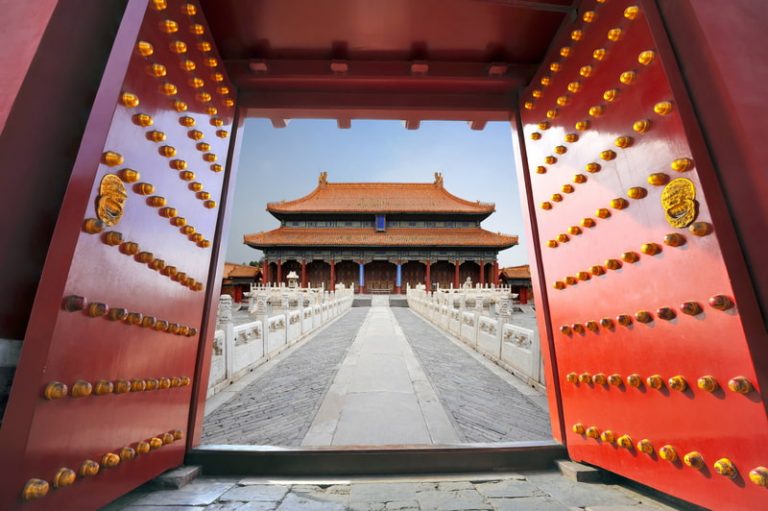 On March 4, the day of the Chinese Communist Party's opening of the "Two Sessions," a fierce wind blew down the doors of the entire side-gate of the Hall of Supreme Harmony in the Palace Museum. (Image: Hungchungchih via Dreamstime)

On March 4, the Chinese Communist Party (CCP) officials who hold the highest power in China, from the central to the local level, gathered in Beijing to participate in the opening of the “Two Sessions.” However, a fierce gale sprang up on that day, blowing down the doors of the entire side-gate of the Hall of Supreme Harmony in the Palace Museum of the Forbidden City. Feng shui experts concluded that it was an evil omen for the CCP.

From the video released the next day, it can be seen that all four doors at the back of the Hall of Supreme Harmony on the left had been torn off and were laying on the ground. The whistling of the wind could be heard in the video as well.

The same day, the strong wind also blew apart the big 2022-shaped flower-bed at the Beijing Railway Station. According to Beijing Meteorological Bureau news, the wind in Beijing on March 4 was out of the north at 10-20mph with gusts of 30-45mph, and over 45-55mph in the mountain areas, accompanied by sand dust.

The role of the Forbidden City in Chinese history

The Forbidden City was the royal palace of the Chinese Qing and Ming dynasties and took 14 years to build. Since its founding in 1420, it has seen more than 600 years of history pass it by.

Being the direct link between Heaven and Earth, only the Emperor could walk through the whole of the Forbidden City as he had a “’mandate from Heaven.” All the halls in the Forbidden City are wooden structures. The Hall of Supreme Harmony was once burned down and rebuilt. But its gates being blown down by the wind is something that has never been witnessed in all its history.

According to Ping Xu, author of the article Feng Shui Models Structured Traditional Beijing Courtyard Houses, published in the Journal of Architectural and Planning Research, “Feng shui (translated as ‘wind and water’) is the traditional Chinese practice used to harmonize people with the natural world and is believed to ensure prosperity.” Xu also outlined: “Through architectural symbolism, these feng shui principles were applied in a manner that reflected and reinforced the strict stratification of traditional Chinese society and the Chinese family.”

Mr. Cai Zhuxin, a member of the Taiwan I Ching Society, is a master of feng shui. Commenting on the higher level drama surrounding the “Two Sessions,” he said the door took first place among the three most essential elements of geomancy in human habitation. The door ushers in good luck and repels misfortune. The door also has door-gods to safeguard it.

That the door was blown down implied that the door-gods already could not protect the door. However, the Hall of Supreme Harmony in Beijing is a place that symbolizes imperial authority. The blown-down door indicates the fall of a dynasty.

March 4 was just the opening day of the CCP’s “Two Sessions,” the National People’s Congress, and the Chinese People’s Political Consultative Conference. Whenever the CCP has held important activities in recent years, anomalies have started to appear in Beijing.

In 2020, May 21 was the opening day of the CCP’s “Two Sessions.” That day, dark clouds started gathering over the sky in Beijing at approximately 3:40 pm, and soon the city was in complete darkness as if it were midnight. The phenomenon lasted for about 10 minutes, and then it poured with rain.

Cai added that celestial phenomena were the most crucial elements in the Chinese feng shui theory. This Taiwanese feng shui master believed that the current pandemic and warfare were related to the CCP. Therefore, the celestial anomalies were alerts from Heaven and meanwhile gave humanity opportunities to read the signs and understand what is being foretold.