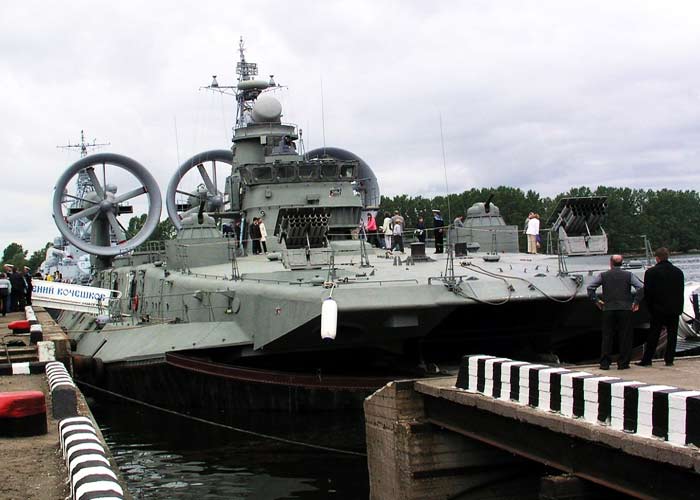 In Part 1, we discussed Chinese naval power and discovered that the Chinese Communist Party (CCP)’s aircraft carrier Liaoning, along with their first J-15 carrier-based aircraft the QC280 gas turbine and subsequent warships, all originated from Ukrainian technology and know-how.

In addition to the above, the CCP purchased four Bison-class military air-cushion vehicles or hovercraft from Ukraine. The Bison hovercraft is a monster, with a full load displacement of 555 tons, and it can carry three Type 96 main battle tanks of more than 40 tons each, or eight armored personnel carriers, or 10 armored vehicles. If it is used purely to carry troops, it can carry up to 360 marines at any one time.

More than thirty Type 726 hovercrafts are speculated to be in service at this time. The Type 726 air cushion landing craft is used in conjunction with the Type 071 dock landing ship for the CCP’s amphibious operations. If there is a war in the Taiwan Strait in the future, they will be the main force of the vanguard.

Ukraine sold four Bison hovercraft and related technical materials at the lowest price, allowing the CCP to develop its own hovercraft.

In the field of engines, the diesel engine used in the Al-Khalid main battle tank developed by China for Pakistan is also from Ukraine, and the engine A-I222 used by the CCP’s own advanced training aircraft L-15 Falcon is also from them.

For the CCP’s Air Force, the Y-8, the Chinese large size range transport aircraft was designed with the help of Ukraine. The Y-8 was originally copied from the Soviet Antonov An-12 transport aircraft made there. An-12 is an old aircraft developed in the 1950s, and its performance is relatively poor in all aspects.

In 2002, the CCP and Ukraine Antonov Design Bureau signed a contract of cooperation to redesign the Y-8 airplane head, navigator cockpit, replace the integrated flight instrument system, replace the engine, and improve the fuel tank layout, which greatly improved the performance of the Y-8.

After the CCP introduced Su-27 and Su-30 aircraft in the 1990s, it also procured a large number of Soviet-era air-to-air missiles, such as R27 and R77. However, after the J-11 experience, Russia was worried about the CCP’s pirating of its technology, and was not very cooperative in the supply of missile spare parts. At this time, Ukraine helped the CCP again and provided the CCP with a large number of missile spare parts.

With the infrastructure left by the Soviet Union, Ukraine’s help for the CCP in terms of engines, aerospace, and naval technology was extremely huge, although it may have done little to help the CCP in terms of army ground forces. After the June 4 massacre in 1989, the CCP encountered an international technological blockade. Russia was always wary of the CCP’s duplicity and refused to provide the most advanced weapons. Against such a background, Ukraine, which had the technology but little money, became a vulnerable target of the CCP’s poaching. Key technologies such as aircraft carriers, carrier-based aircraft, aircraft engines, marine engines, and hovercraft were all imported from or designed there.

Ukraine has given so much help to the CCP over the past few decades, and now the Ukrainian people are in crisis. But what has the CCP done to help them out?