Can Mushrooms Be Used to Fight COVID-19? 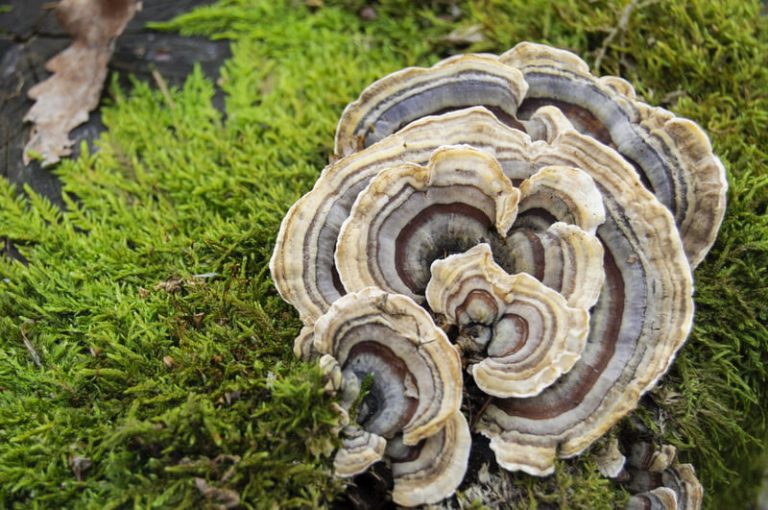 Researchers are looking to see whether the immune-boosting power of turkey tail mushrooms is a suitable treatment for those experiencing COVID-19 with mild to moderate symptoms. (Image: Alexkv1 via Dreamstime)

Mushrooms are being looked at in a number of trials to thwart COVID growth in the human population. Despite the arrival of different types of vaccines and usage of booster vaccination, it seems near impossible to eradicate the menace called COVID-19! The medical community is having a harrowing time containing the massive pandemic. The virus keeps mutating and the world is now anticipating another wave. Whether the 4th wave of COVID will be global or not remains to be seen, but efforts are underway to use natural herbs and foods to augment the efficacy of the vaccines.

The trials are aimed at fighting the killer virus using Chinese herbs and medicinal mushroom species. The experts think that the herbs can be effective for people coping with mild to moderate symptoms. The first two phases of trials were carried out at the University of California San Diego and UCLA in late 2021. The third round of trials involved administering medicinal mushrooms along with COVID-19 vaccines. The 4th trial will involve testing the mushrooms without COVID booster shots.

According to the data, two mushroom species, turkey tail and agarikon, were used and both are available as OTC supplements. Do not confuse these with “magic mushrooms” you may have heard about. The chief investigator of the trials, Gordon Saxe, said these species are far from psychoactive in nature. The National Center for Complementary and Integrative Health’s D. Craig Hopp said: “We know that a cytokine storm poses the greatest risk of COVID mortality, not the virus itself. The danger is that an immune-stimulating agent like mushrooms might supercharge an individual’s immune response, leading to a cytokine storm,” (WebMD).

Noted immunologist and Statera Biopharma’s chief innovations officer Stephen Wilson said the possibility of a cytokine storm affecting people using the mushrooms in the trial is unlikely. Wilson said: “We think the mushrooms increase the number of immunologic opportunities to better see and respond to a specific threat. In the doses used, the mushrooms perturb the immune system in a good way but fall far short of driving hyper or sustained inflammation.” The FDA investigators also inquired about the risk of potential cytokine storms before giving a nod for the trials.

Mushrooms have been used for centuries to treat medical issues

Saxe pointed out that natural bacteria, microorganisms, and mushrooms were used to treat infections even in the ancient ages. He added: “Hippocrates, the father of Western medicine, used mushrooms. Penicillin comes from fungi. It’s not a crazy concept. Most people who oppose this or are skeptics — to some extent, it’s a lack of information.” Other health experts have expressed mixed views on the feasibility of the trial. Brigham and Women’s Hospital’s Daniel Kuritzkes said the FDA approving the study was not unexpected. He added that FDA approval for carrying out an early-phase study with safety data in place comes easy. However, approval for the final drug is not easy to obtain.

While taking mushrooms as a supplement can be useful for battling COVID-19, certain issues are not clear, as some health experts point out. How they will interact with medications remains to be seen. Kuritzkes mentioned the example of using St. John’s Wort for treating patients with HIV. However, he admitted that many traditional medicines were obtained from herbs and plants. For example, cinchona bark was used to make quinine, the medicine for malaria.

A number of earlier studies involving mushrooms hinted at the efficacy of these herbs in fighting virus-borne ailments and infections. A 2019 study showed that the mushroom agarikon was good for fighting viruses like herpes, H5N1, and H1N1. Saxe thinks mushrooms can be good for pausing the replication capacity of the SARS-CoV-2. He added that they may enhance the production of antibodies created by vaccines in the human body.