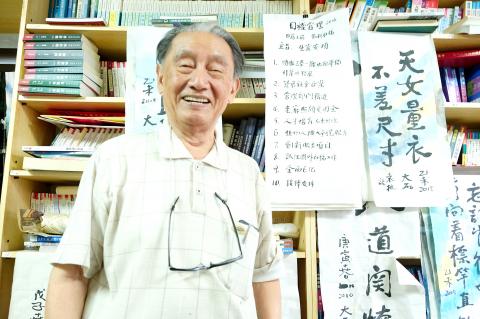 Cao Qing was a devoted Christian who, as a young man, had made a promise to God that he would one day do charity work that no one else wanted to do. (Image: via GSWF)

Cao Qing was a devoted Christian who, as a young man, made a promise to God that he would one day do charity work that no one else wanted to do. He developed a passion for supporting people who could not live at home due to needing 24-hour care.

When he retired in 1970, Cao Qing bade farewell to his wife and daughter and began to travel the roads of Taiwan, searching for people to help. He asked the same question of everyone he met: “Do you know where I can find the people I want to help? Would you like to support me in my endeavors?”

For five years, Cao Qing asked more than 10,000 strangers these questions. As a result, he was labeled “a lunatic,” “a cheater.” Many times he was driven away or bitten by dogs. Eventually, more than 700 people left their names and addresses on his sponsor list. With this list, Cao Qing started to fulfill the wish he made to God and visited low-income families with vegetative patients.

Cao Qing spent the next five years traveling all over Taiwan, searching for and finding the people who needed his help and garnering support for his work. Over 700 people signed on to be sponsors as his dedication moved them. Unfortunately, he also suffered great hardship on his journey, with people showing great cruelty and disdain for his passion.

In Taipei, he found people in need of care who had been deserted in bleak and foul-smelling corners. In Taichung, he found a patient covered in bedsores from a lack of medical attention. In Hualien, he found a patient lying in his filth who was so thin that every bone of his body was visible. Cao Qing cried at the hopelessness and the neglect of these people, and he swore to restore their dignity.

Cao Qing lobbied the government and big corporations alike, begging them for funding to help with his mission. He was given tea to drink in the most refined meeting rooms of the cities he was in, all to no avail, as no one wanted to help. He had never felt more alone.

When Cao Qing was ready to give up after his final meeting still failed to yield results, standing alone in the middle of bustling Taipei, he screamed and shouted and cried, falling to the ground in despair.

Then, he remembered the ancient story about two Chinese monks, one rich and one poor, who wanted to travel to the South Sea for some ancient scriptures. The rich monk worried that he would run out of money, that he wouldn’t survive the hardships of the road, and that the journey was too long. The poor monk set out with just his bowl and determination and started the journey on foot, willing to face whatever challenges arose. The poor monk succeeded, returning years later with thousands of scriptures. Cao Qing smiled at the memory and determined that he would be like the poor monk and succeed no matter the challenges.

Soon after, he rented a house and established the Genesis Social Welfare Foundation. Cao Qing traveled to Sanchong in Taipei and returned with Lin Lemei, who became the first recipient of Cao Qing’s loving care. Lin’s father had had a stroke, and her mother had cancer, so they could not care for her properly. The house that Cao Qing rented was furnished with things he had found on the street. Cao Qing himself didn’t have a bed and slept on the floor.

He realized that the foundation could not function without some help and he didn’t have the resources to do it all himself. Cao Qing remembered the 700 people who had signed up to help him with his life’s work. One letter after another, he wrote to each one. A month later, it was estimated that the cost of running the foundation was NT$130,000 (US$4,540). However, the donations received that month were exactly NT$130,000 (US$4,540)! The same thing happened for the following two months. In the second month, costs and contributions received were precisely NT$180,000 (US$6,287), and in the third month, donations received totaled NT$230,000 (US$8,034). Cao Qing had created a miracle.

But he didn’t stop there. There wasn’t enough staffing or budget to provide the level of care he wanted for his charges in the early years. Cao Qing didn’t want to ask their families for money as he understood a lot of them were struggling. So instead of money, he asked that one family member spend three days per month volunteering at the foundation. He made this request gently, and if a family didn’t comply, there would be no consequences for his charges or their families.

Two of his charges had young wives with little children who would come and volunteer each month. Cao Qing understood how hard and unfair it was to burden these young women with this lifelong obligation, so he wrote letters stating that their husbands would never recover. He suggested that the young women could now divorce their husbands and move on with their lives if they wished.

Once the foundation was up and running successfully, Cao Qing took an interest in supporting the city’s people without housing. He spent New Year’s Eve donating meals and found a new focus for his passion.

In recent years, the foundation has provided meals and daily supplies for people without housing. In addition, each Lunar New Year, they provide a feast and set up special stalls to help the community celebrate in style.

After overcoming the many difficulties and challenges of the early years, the foundation now has six branches throughout Taiwan accommodating more than 400 people and providing care to hundreds of people without housing. In addition, in recent years, the foundation has started to support those who have dementia.

Cao Qing was very proud of all he accomplished, starting with donations from just 700 committed sponsors. It shows the changes that can be made when one has a pure heart and dedicates themselves to genuinely helping others.